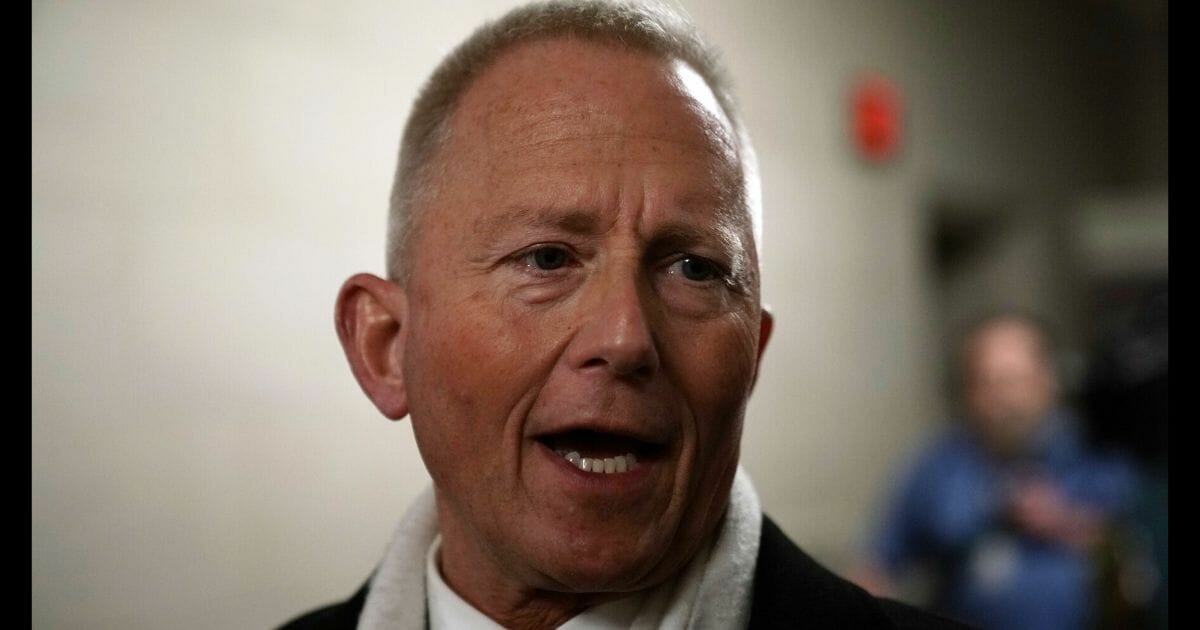 House Speaker Nancy Pelosi and her allies in the liberal media would have you believe that the Democratic caucus is united behind the effort to impeach President Donald Trump and see him removed from office.

That simply isn’t the case, however, and cracks in the facade are already starting to appear even before official articles of impeachment have been drafted or put to a vote.

There were two Democrats who voted against Pelosi’s resolution authorizing the impeachment inquiry in late October, and one of those two — New Jersey Rep. Jeff Van Drew — just made it clear to a reporter that, as things stand right now, he remains opposed to the impeachment effort and would vote against any articles that may soon be put forward.

Van Drew was tracked down on Thursday by CNN senior congressional correspondent Manu Raju, who tweeted that the freshman congressman “plans to vote against all the articles of impeachment ‘unless there’s something that I haven’t seen, haven’t heard before.’”

Raju added, “Van Drew warned Democrats to ‘be careful what you wish for’ and he added that impeachment ‘is tearing the nation apart. … And I want to bring people together.’ Van Drew said he would have preferred a censure vote so they could ‘move on.’”

TRENDING: City Announces 3% Tax for Reparations, Regardless of Slave Ancestry

Van Drew warned Democrats to “be careful what you wish for” and he added that impeachment “is tearing the nation apart. … And I want to bring people together.” Van Drew said he would have preferred a censure vote so they could “move on.”

In a follow-up tweet, Raju also noted that he’d made contact with the other Democrat who’d voted against authorizing the impeachment inquiry in the first place, Minnesota Rep. Collin Peterson, and while his response on where he stood regarding potential articles of impeachment wasn’t exactly definitive, it wasn’t particularly subtle, either.

Asked if he’d vote to impeach Trump, Peterson reportedly replied, “I don’t have an idea what they’re doing,” and then walked onto the floor of the House chamber.

Do Democrats risk losing their House majority over their impeachment effort?

Rep. Van Drew is absolutely right to stand against Pelosi and the anti-Trump media and refuse to jump on the impeachment bandwagon based on what is currently known.

Despite the left’s insistence, there has not been any conclusive or indisputable evidence of wrongdoing, much less an impeachable offense, committed by President Trump with respect to Ukraine, or anything else, for that matter.

Furthermore, he couldn’t be more correct in warning his fellow Democrats to “be careful what you wish for,” for multiple reasons.

First, should Trump be impeached by the House, he will almost certainly be acquitted by the Republican-controlled Senate, which will undoubtedly be viewed as a vindication and make him that much stronger as he moves toward re-election in the 2020 vote.

Second, as disgusting and disturbing as the left’s tactics against Trump have been over the past few years, turnabout is fair play in politics.

RELATED: Schiff’s Proof of ‘Coordination’ Has an Embarrassingly Obvious Flaw

Democrats can and should expect a future Democratic president to receive the same treatment, if not even worse, from Republicans and will quite likely face an impeachment and removal effort — one that could prove more successful than the current push, depending on the makeup of Congress at the time.

As for impeachment “tearing the nation apart,” Van Drew is again accurate, albeit a little late, given that the left has been attempting to rip the country in two since before Trump took office, and will no doubt continue attempts to do so after impeachment and even after Trump eventually leaves office, however or whenever that may be.

Considering Van Drew represents a long-held Republican district in southern New Jersey that President Trump won by 5 points in 2016, some may assume his stance against impeachment is solely out of self-interest to be re-elected rather than a stand on principle.

But according to The Hill, that may not be the case, as his opposition to impeachment could actually be placing him in more danger of losing his seat than if he were to support it.

The congressman is reportedly facing concerted pressure to back impeachment from his Democratic constituents, including a prominent county party chair, and there are already two or three potential primary challengers he may have to contend with next year if he ultimately votes against impeaching President Trump.

Van Drew nonetheless confirmed his position against impeachment and told The Hill, “I’ll look at new information that’s presented. I’ll always have an open mind. But where I am now is where I was before.”

As for the pressure against him from Democrats back home, the congressman added, “Nobody ever forces me how to vote.”

Rep. Van Drew should be commended and supported for being brave enough to stake out an unpopular position against his own party, potentially even endangering his own career.

Hopefully, his example will encourage other House Democrats leery of impeachment to similarly buck the party leadership and take a stand for themselves as well.