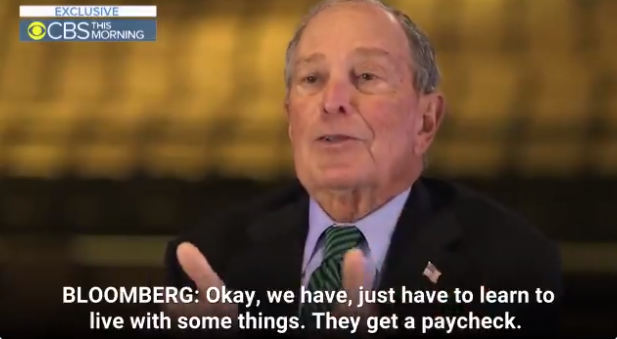 Through Friday’s CBS Evening News, CBS News has refused to show on its morning or evening newscast 2020 Democratic Michael Bloomberg telling CBS This Morning co-host and Democratic friend Gayle King that Bloomberg News journalists need “to live with” the company policy that Bloomberg and primary opponents can’t be investigated but President Trump can.

So for what’s been a universal blackout on broadcast network newscasts of this controversial policy, the interview presented a chance to break that streak, but alas, this exchange was left on the cutting room floor. Instead, it was relegated to a Thursday night video tweet from CBS This Morning’s account.

Former NYC Mayor & presidential contender @MikeBloomberg responds to criticism of his media company’s reporters not being allowed to investigate 2020 Democratic candidates: “With your paycheck comes some restrictions and responsibilities.”

King asked the question in large part due to a Trump tweet criticizing the policy included his nickname for Bloomberg:

He recently said, ‘Mini Mike Bloomberg has instructed his third-rate news organization not to investigate him or any Democrat, but to go after President Trump, only.” Well, you’ve got a nickname already. What’s your response to what he said?

Bloomberg said that “I don’t know that I would accept the nickname” before unspooling about his company and his rather lazy train of thought about how his company would go about the campaign going forward with him a candidate:

When I started a news business in my company, I hired somebody outside. Their job is to run the news organization. The other job is to set the ethics. I think people have said to me, “how can you investigate yourself?” And I said, “I don’t think you can.” But if you take a look at the Bloomberg News organization, we carry news from lots of different places, like New York Times and The Wall Street Journal and The Washington Post. There’s plenty of ways for people to get news about the candidates if the look at Bloomberg News.

King pushed back by noting that “even your own news reporters have complained they think it’s unfair that they’re not allowed to investigate other Democratic candidates because their boss is in the race.”

Without missing a beat, Bloomberg smugly replied that Bloomberg News journalist “just have to learn to live with some things” because they’re still “get[ting] a paycheck, but with — with your paycheck comes some restrictions and responsibilities.”