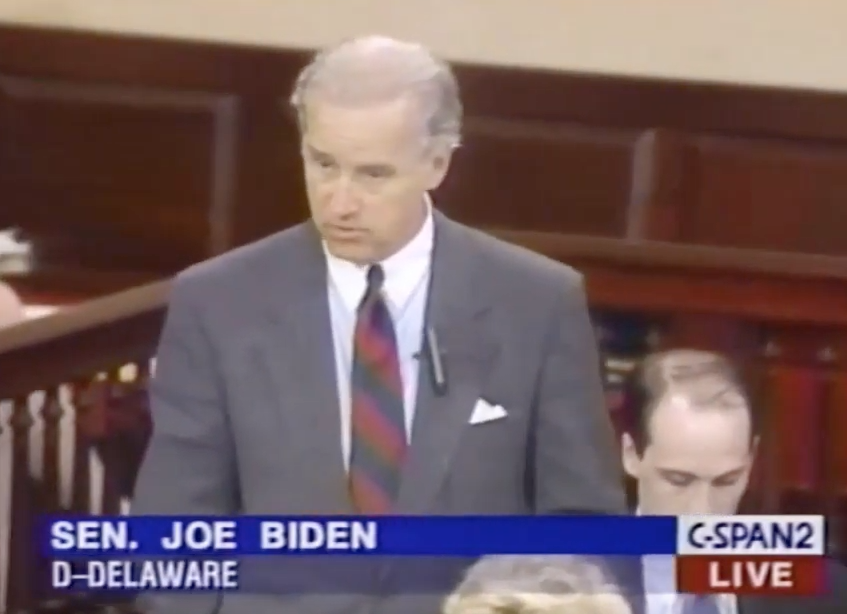 Former vice president Joe Biden on Friday called the Trump administration “morally bankrupt” for its expansion of work requirements for food stamps, even though the former vice president was a self-proclaimed architect of America’s work for welfare regime.

Responding to news that an estimated 700,000 Americans could be removed from welfare rolls by a recently announced federal rule, Biden took to Twitter to say, “This administration is morally bankrupt.” He joined dozens of other Democrats who have expressed outrage at the change, which is meant to reduce SNAP rolls which swelled after the Great Recession.

During his time as a senator, however, Biden was a major backer of work requirements for welfare. In particular, he supported the Personal Responsibility and Work Opportunity Act, the Clinton-era overhaul of the federal welfare system widely seen as ushering in “workfare” in the United States. Speaking in defense of the bill, he heralded it as a victory for the idea that “work should be the premise of our welfare system” and noted that he had pushed for such a reform before his first presidential run in 1988.

The seeming contradiction between Biden’s opposition to the administration’s decision and his previous stance on welfare, which voters could perceive as hypocritical, is yet another example of Biden’s past as a moderate Democrat leaving him out of step with the modern Democratic party.

Biden not only voted for the work requirement legislation in 1996 but also took to the Senate floor to extol the importance of welfare recipients working.

Biden acknowledged in his speech that “there will be people, many of them children, who will fall through the cracks because of this bill” but contended that “that’s not a reason for failing to move forward.”

Biden said he had been “pilloried by many of [his] friends” for supporting work reform in 1987 but by 1996 “everyone [in the Senate] believes that work should be the premise of our welfare system.”

Biden’s full July 18, 1996 speech on work requirements can be viewed below.

The recent changes to SNAP promulgated by the Department of Agriculture represent a far less substantial change to the welfare system than what Biden advocated for during his time in the Senate.

The new rules would aim to end the use of state-level waivers which permit able-bodied adults without dependents to collect SNAP benefits without meeting legally mandated work requirements.

Such waivers have been used by the state of California to exempt 800,000 able-bodied adults from work requirements alone, even as unemployment continues to hit record lows. The Trump administration’s new rule would affect just a fraction of the 42 million Americans who collect SNAP benefits.

Biden’s 1996 welfare reform, by contrast, is widely considered one of the most consequential changes to the federal welfare system of all time. It helped implement work requirements of the kind that Biden himself now condemns.

The changes are widely condemned on the left. Slate‘s Jordan Weissmann, for example, said it “tore America’s safety net” and blamed it for creating “a zombie system rather than the bridge from poverty to work that its reformers envisioned.” Stacy Dean of the left-leaning Center on Budget and Policy Priorities noted that the law also made major cuts to SNAP, the very program that Biden now laments the expansion of work requirements for.

Biden’s past comments on welfare reform may prove yet another example of the candidate’s less-than-far-left past coming back to haunt him. The 2020 frontrunner has already faced widespread criticism for another 1990 bill he helped author, the 1994 crime bill which many in the Democratic party’s progressive wing blame for the rise of mass incarceration.

The Biden campaign did not respond to questions on the new work requirements.