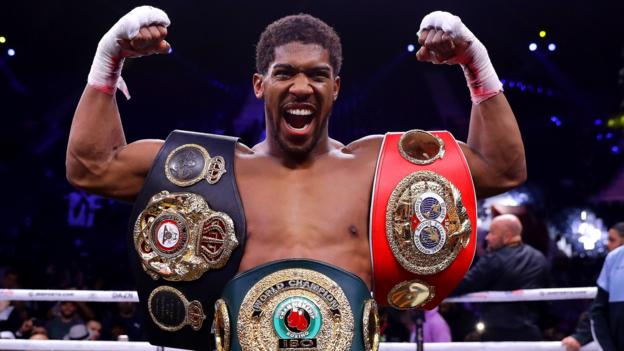 Six months on from the night Ruiz stunned boxing, Joshua risked seeing his career left in tatters with a second defeat, but served up 36 minutes of movement and well-timed punching to take the IBF, WBA and WBO titles back to Britain.

After cutting his Mexican rival inside the first round he never looked back and picked out smart jabs and right hands throughout before being serenaded with chants of “AJ, AJ, AJ” by 14,000 or so fans in the Diriyah Arena.

Ruiz never looked close to landing a knockdown and when scores of 118-110 118-110 and 119-109 were read out, Joshua jumped up and down in the ring in celebration, just as the man who had wrecked his US debut did in June.

Joshua gets it right all night

Patterson fell to the canvas seven times in one round as he lost his belts to Ingemar Johansson in 1959 but regained them in a rematch. The question in Saudi Arabia was whether Joshua could show the same mental fortitude after being knocked down multiple times by Ruiz in June. His answer was emphatic.

A downpour in a country that barely sees rain stopped moments before Joshua strode to the ring, prompting him to carefully dry his feet on the canvas.

From that moment on, his feet moved with grace. Seconds before the off, Ruiz was told “let’s go Andy” by his corner but he was rarely allowed to get close to his rival and inflict the damage he did in the first fight.

Ruiz, the bookmakers’ underdog again, was cut above his left eye in the first. He landed two jabs of his own in the second but took a left hook as Joshua moved with the lightness of a man at his lowest weight in five years.

He was burning energy but was slick and showed variety in working head and body in the third. A crowd unfamiliar with the sweet science at such close quarters offered audible applause and cheers as the smart work landed.

There was always tension given the speed with which Ruiz’s gold gloves can move, and in the eighth he served up a first scare. As the pair tangled, Ruiz made things ugly and winged in a hook. The crowd stamped their feet while Ruiz’s fighting compatriot Saul ‘Canelo’ Alvarez stood and screamed ringside.

The ninth felt key, Joshua needed to establish distance again. He landed a solid uppercut but saw Ruiz fire back wildly instantly. Again, the incredible durability of the champion and the constant threat he carried was evident.

Deep in the 12th, Ruiz beat his chest as if to dare Joshua close. After a night of lateral movement and poise, it was never going to happen. Joshua glared out at the crowd as the bell sounded. It was a look of a defiance. It was the look of a man who had proved his point.

Some seeing Ruiz’s showing here will ask what was wrong with Joshua in their first meeting – the Mexican-American was never able to rediscover the heights he hit in New York.

His weight gain of 15lbs was the same as James ‘Buster’ Douglas piled on after stunning Mike Tyson in 1990. Douglas lost easily to Holyfield months later and as the scorecards widened on Saturday and Ruiz ate shots, it looked as if his new status and its attached distractions might have taken a similar toll.

Hauling 20st 3lbs around a ring is no easy feat. Only Nikolai Valuev – who was 7ft tall – has weighed more and held a world title. And as Saudi royalty watched on at ringside, Ruiz was consistently unpicked and outmanoeuvred.

He will at least leave with a career-high pay day in excess of £10m. He can live the rest of his life as a former world champion who stunned boxing. But if he shoots for titles again, he will simply need to be better.

Joshua had said defeat would have been “catastrophic” for a career that promised so much, delivered plenty and then, from nowhere, was shaken to its core.

Some close to him had expressed how nervous they were all week. The fact his entire team stayed with him in the ring for over 30 minutes after his win pointed to their relief.

He has promised to fully explain what happened on that June night but it is to his credit that he pushed for a new approach to his training, made adjustments and lived out the lessons he gleaned from his lowest point in the paid ranks.

To use a boxing term, he ‘boxed the ears’ off a man who had prompted him to ask so many questions of himself.

The talk of facing Deontay Wilder or Tyson Fury – temporarily derailed by Ruiz in June – will resume. Another rematch, though neither party is obligated this time, also has legs.

Joshua has earned such options after such a clinical response to adversity.

What they said – ‘When was the last time we had a role model like this?’

Anthony Joshua on BBC Radio 5 Live: “I have got a long way to go. It’s not about me, it’s about Britain. We have taken boxing to the world and I’m always here to support grassroots boxing. I don’t want to talk too much because I have done that a lot in the past, and a big mouth is not what people respect.

“Whatever I can do, I will. If that is fighting the other top fighters in the division, then so be it. Go to the BBC Radio 5 Live Twitter and leave your comment on who I should fight next because I’m up for anything!

“I’m a man that has made mistakes and when I was on losing path in life, I matured and bounced back. After I took my loss I had to mature as a fighter. Life is in boxing and that is why I love it because they go hand in hand.”

Promoter Eddie Hearn: “It’s the individual, anyone around him knows he’s the nicest bloke you could meet.

“Madison Square Garden was a humiliation, he went down four times – people wrote him off, said he had no heart, he quit. He went back, brushed himself down and went back to work to prove you all wrong. It was an absolute masterclass, a shut out, a way of boxing people didn’t believe he could do.

“He taught himself to box like that – the discipline was incredible. All the things no-one thought he possessed. That’s because he’s getting better. What heavyweight has a resume like him? Give him respect; he has changed the face of boxing. A great individual with a big heart.

“They wrote him off. I have represented Anthony since he turned pro. He is a very close friend of mine. The strength he has shown is unbelievable. When was the last time we had a role model like this? We should be so proud. An absolute role model for our country.”

Andy Ruiz Jr: “It was his night. I didn’t prepare how I should have. I gained too much weight. I don’t want to give excuses, he won.

“He boxed me around. If we do a third fight you best believe I’m going to get in shape. I’ll be in the best shape of my life.

“I thought I was going to feel stronger. Next fight I’m going to get more prepared. I tried to train myself for this. I was chasing him too much. I was hesitating too much.”

Joshua’s trainer Robert McCracken: “I think he was where I wanted him to be for this fight. He has listened in camp, worked really hard, and I thought he boxed very well against a dangerous fighter.

“Andy Ruiz is a real danger and he is very quick and heavy-handed. There were a couple times Josh went into mid-range and came unstuck but he settled back down in the corner and got back on it. His weight was great and his jab was tremendous.”

BBC Radio 5 Live boxing pundit Steve Bunce: “AJ was absolutely clinical and he never wasted a shot. That was class and he stuck to his plan. Beautiful to watch.

“He got it right in spectacular fashion. He has been steely and nasty.”