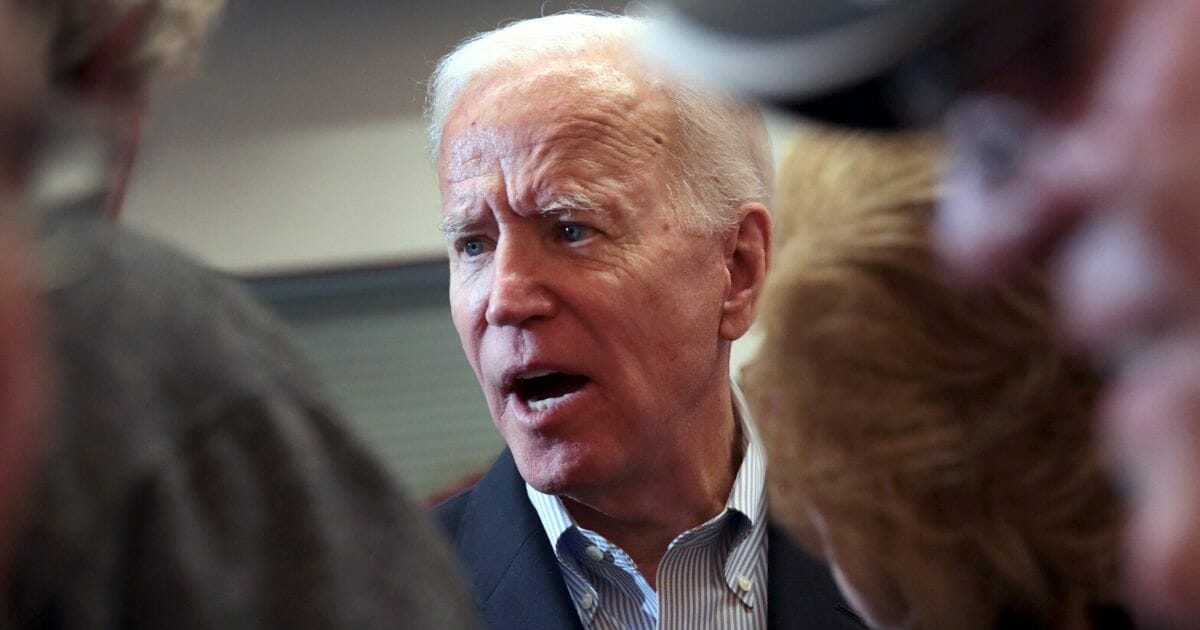 While former Vice President Joe Biden is well known for his absurd antics and gaffes, he also is known for showing flashes of quick temper at times — and one sure-fire way to provoke that temper is to ask him questions about the alleged bad behavior and corrupt dealings of his son Hunter.

That is exactly what happened in New Hampton, Iowa, on Thursday when a potential voter at a campaign event was insulted multiple times by a visibly angry Biden.

The voter had asked a question about Hunter and drew unfavorable comparisons between the 2020 presidential candidate and President Donald Trump.

The altercation began after the voter — who identified himself as a retiree who watches TV all day — initially suggested that Biden was too old and unfit to be president, prior to asking about his son’s suspect dealings in Ukraine.

The voter said that Biden, like Trump, had been “messing around in Ukraine” and accused him of sending his son “over there to get a job and work for a gas company that he had no experience with gas or nothing in order to get access for the president. So you’re selling access to the president, just like he was.”

“You’re a damn liar, man. That’s not true,” Biden fired back forcefully. “And no one has ever said that, no one impugned that.”

A staffer then attempted to take the microphone away from the voter, but Biden told the aide to let the man continue.

Biden offered up the standard platitudes about his experience being the reason he was running for president prior to taking an obvious shot at the man’s weight and intelligence.

Will all of Biden’s antics eventually force him to drop out of the race?

“And if you want to check my shape, let’s do push-ups together here, man,” Biden said. “Let’s run. Let’s do whatever you want to do. Let’s take an IQ test. OK?”

The crowd cheered, but Biden wasn’t finished. He continued: “Number two, no one has said my son has done anything wrong, and I did not on any occasion, and no one has ever said it.”

The voter interjected that he hadn’t accused Biden personally of doing anything wrong, to which Biden shouted back with anger and a sharp glare, “You said I set up my son to work on an oil company, isn’t that what you said? Get your words straight, Jack!”

The man replied that he was just repeating what he’d heard on MSNBC, but Biden said, “You don’t hear that on MSNBC, you did not hear that — what you heard — look, OK, I’m not going to get into an argument with you, man.”

The voter agreed he hadn’t been looking to get in an argument, either, only for Biden to counter, “Well, yeah, you do. Look, Fat, look, here’s the deal.”

The man then suggested Biden had no more backbone than Trump did, spurring boos from the crowd and a dismissive “Any other questions?” from Biden.

Taking his seat, the voter said he wasn’t planning to vote for Biden, to which the candidate snarkily replied, “Well I knew you weren’t, man. You think I thought you’d stand up and vote for me? You’re too old to vote for me.”

You can watch the entire exchange right here, albeit with less than clear audio for the voter’s remarks:

This exchange is nothing short of incredible and, dare I say, “unhinged,” to borrow an oft-repeated line from President Trump’s critics.

One thing is certain, questions about Biden’s son are definitely his Achilles heel and something that his opponents — both Trump and other Democrats — would be wise to key on if they want to throw him off his game.

As for Biden’s dismissiveness with the allegations about his son and how neither of them had been accused of wrongdoing, that is simply a lie, as the entire point of the Biden/Ukraine issue is a suggestion of corrupt wrongdoing by both of them.

One thing Biden got right, however, is that the man probably didn’t hear about the allegations on MSNBC, as that network has remained largely quiet about the whole thing.

It remains to be seen how this incident will play out for Biden more broadly among voters, if his anger and insults will turn them off and depress support, or if his strength and vigor in pushing back will bolster his campaign.

In the past, this incident would probably be the death knell of his chances at the Oval Office, but these days, virtually all past precedent has been thrown out the window.