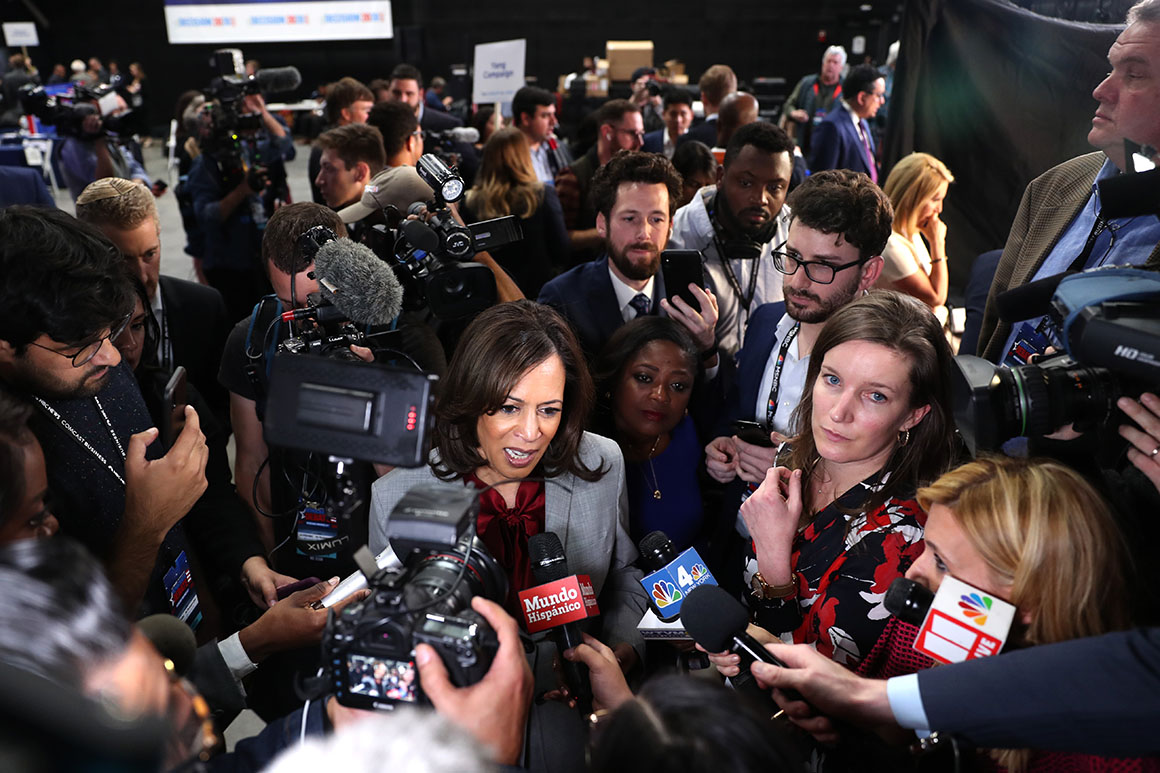 Harris’ exit this week was the first from a candidate who had been running in the upper tier as late as summer. And in a vulture-like spectacle, her rivals are furiously moving to prey on her former pockets of support. They are raising money off her withdrawal, courting the donors and elected officials who endorsed her and re-opening a discussion about race and gender in the 2020 campaign.

In California, donors and politicians who had endorsed Harris began receiving calls from other campaigns within hours of her withdrawal. Endorsers in South Carolina were fielding a torrent of overtures from rival candidates. And in Iowa, where Harris had attempted to make her final stand, distraught staffers’ phones lit up with text messages from campaigns eager to recruit them.

“I am of a generation and gender that does not just drop the F bomb on Twitter, but I’m telling you, yesterday, I was within half a hair,” Sue Dvorsky, a former Iowa Democratic Party chairwoman who had endorsed Harris, said on Wednesday, after witnessing the instant recruitment of Harris’ still-sobbing staff.

In a sign of the uncertainty surrounding the fallout from Harris’ withdrawal, Dvorsky said she does not plan to endorse again in the primary. She suspected many original Harris endorsers — herself included — would now focus instead on bolstering the state’s caucus infrastructure and supporting the eventual nominee.

By the time she abandoned her run, Harris was polling at less than 4 percent nationally — with multiple polls suggesting her meager support would not go to any one candidate, but to multiple competitors.

But her one-time status as a frontrunner — as well as her connections in California, a major donor state with a large congressional delegation — had afforded her a wealth of institutional endorsements and kept some California Democrats on the sidelines, fearful of crossing a home-state senator.

Harris’ top endorsers and former aides said they’ve already received calls from Tom Steyer or his brother, Jim. And even before her withdrawal, multiple candidates had sought conversations with the state’s governor, Gavin Newsom, a Harris endorser.

Warren’s campaign also has continued to plow through a call sheet of elected officials — with a particular focus on California’s congressional delegation. And on Tuesday — the same day Harris withdrew — Sanders adviser Jeff Weaver told reporters on a press call that “it’s no secret Senator Harris had substantial support among elected officials in California … And now with her leaving the race, our campaign will certainly be reaching out to folks.”

“There’s no question it’s going to shake things up,” said Antonio Villaraigosa, the former Los Angeles mayor who supported Harris but said his endorsement of her had not yet been made public. “I think you’ll see a scramble for folks who’ve already endorsed her, and for the ones who have been on the sidelines … And I think you’re going to see the top four candidates, particularly, work really hard to get some of that support.”

A Berkeley IGS Poll conducted a week prior to Harris’ announcement put her support at just 7 percent in California, with a large majority of likely primary voters suggesting she should suspend her campaign. The poll, which put Bernie Sanders running first by a slim margin in California, suggested Joe Biden and Elizabeth Warren stand to gain the most from her departure, followed by Sanders and Pete Buttigieg. That projected split of Harris’ support mirrors national polling, as well.

Still, Harris’ exit offered opportunity for other candidates who sought to step into the demographic void left by her departure.

Booker lamented on Twitter that “we’re spiraling toward a debate stage without a single person of color.” On MSNBC, he used a discussion about Harris’ withdrawal to make a fundraising appeal for himself. His campaign said Wednesday was the largest online fundraising day of his run to date.

Castro, the former Housing and Urban Development secretary, said on Twitter that “it’s a shame that we’re headed for a December debate without a single person of color.” And Warren complained in a fundraising email that “two women senators” — Harris and Kirsten Gillibrand — had been “forced out of this race, while billionaires Tom Steyer and Michael Bloomberg have been allowed to buy their way in.”

Harris polled marginally better in the early-voting state of South Carolina than she did nationally, and Michael Ceraso, a former New Hampshire director for Buttigieg’s presidential campaign, said Wednesday that securing endorsements from Harris’ supporters could serve as a source of validation for top-tier candidates trailing Biden there, particularly among black voters.

“This is an opportunity for these folks, especially in South Carolina, to position themselves as No. 2 behind Biden,” he said.

In South Carolina, Bakari Sellers, one of Harris’ most prominent surrogates, is getting inundated with calls from 2020 Democrats. He was careful to note that he doesn’t think Rep. Tulsi Gabbard — who has sparred with Harris in debates — “should waste her daytime minutes calling me.”

“Kamala supporters fell in love with a candidate,” Sellers said. “It will be tough to replicate that emotional bond.”

JA Moore, a state lawmaker and top young Harris endorser in the state, said he’s already heard from nearly a dozen presidential campaigns, including much of the top-tier, and is hoping to join with other supporters of the California senator to discuss ways to leverage their position for a potentially louder voice in the primary process.

Moore, like many Harris endorsers, stressed that emotions from her premature departure are still raw. But he began sketching out who might fit the bill for younger generations of politically active Democrats like himself. Moore said he likes Buttigieg, but also Warren, Booker and Castro.

“For those of us who are younger — and especially people of color — I think it is going to be very difficult to outwardly support an establishment candidate because what you were able to find in Kamala is the sweet spot,” he said, explaining that she threaded the needle between old and new guard.

Leaders of the coalition said they plan to hold a board meeting later this month to discuss whether to endorse another candidate after backing Harris. Members of the group have already split between the leading four candidates, but Chairman Prakash Kopparapu said he’s looking at who could pose an outside shock.

“I’m wondering who the 2020 caucus surprise is — whether it’s Amy Klobuchar or Cory Booker at this point,” Kopparapu said.