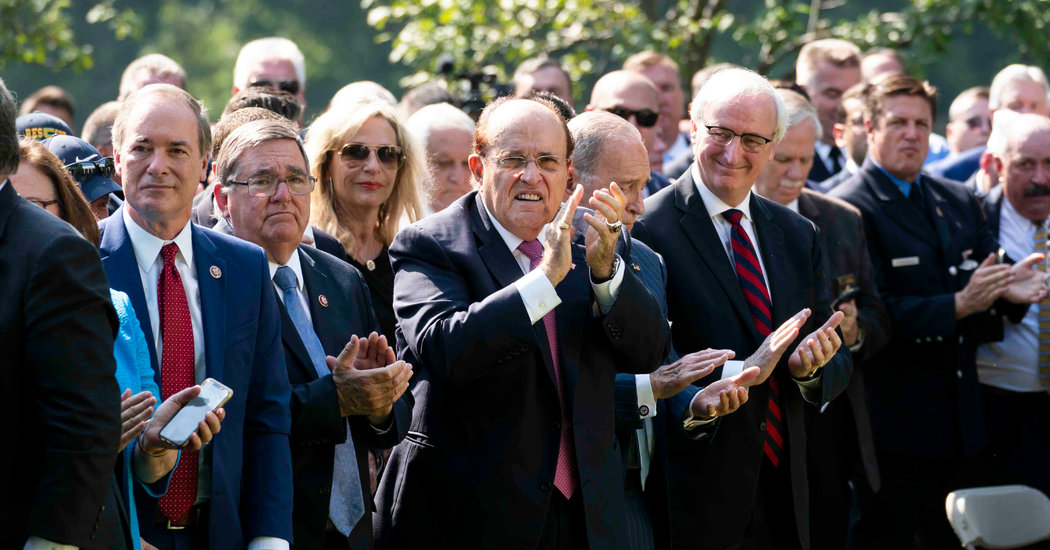 As part of its portrait of Mr. Trump’s campaign of pressure on Ukraine, the committee’s report released this week listed several calls between Mr. Giuliani and White House phone numbers, including one “associated with” the White House’s Office of Management and Budget, cited in the report simply as “O.M.B. number.”

Such calls suggested contact between Mr. Giuliani and key officials at significant moments during Mr. Trump’s dealings with Ukraine. The budget office was involved in the administration’s freeze on $391 million in security aid for Ukraine, a key lever in the president’s pressure campaign.

But the phone number is a generic White House switchboard number beginning with “395,” people familiar with the phone records said. While government directories list it as associated with the budget office, they also show the number as associated with offices in other parts of the White House, including the upper floors of the West Wing and the National Security Council.

Still, administration officials have not contested the broader assertion that the impeachment report made with the call records: that Mr. Giuliani was in close contact with the White House as he carried out a shadow Ukraine policy pressing its new president to announce investigations that could benefit Mr. Trump politically.

Asked about the call labeling in the impeachment report, a senior Intelligence Committee official said the phone numbers appeared to be associated with the budget office based on public government directories.

The committee was still investigating the call records, including those identified in the report as connected to the budget office, said the official, who like others was not authorized to speak publicly.

Mr. Giuliani has given different answers publicly about whether he spoke with anyone at the budget office.

On Tuesday, he told The New York Times that he had nothing to do with the administration’s decision to withhold aid from Ukraine, which is fighting a war against Russian-backed forces in its east, and that his conversations with officials at the budget office related to other issues.

“I never discussed military assistance,” he said. “I am expert on so many things it could have been some very esoteric subject.”

But on Wednesday, he texted CNN that he did not “remember calling O.M.B. and not about military aid never knew anything about it.”

Mr. Giuliani did not respond to a message seeking comment on Thursday.