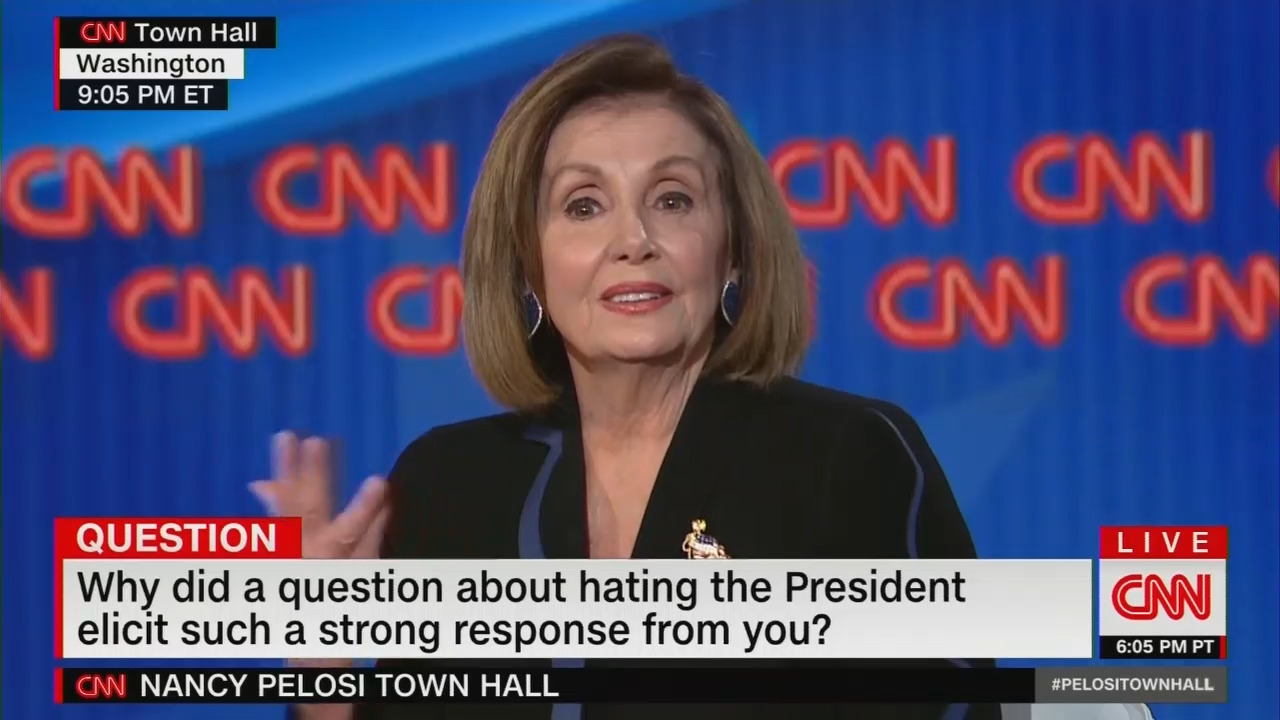 While CNN host Jake Tapper has defended journalists on numerous occasions over the course of his career, he chose not to during Thursday night’s CNN town hall with House Speaker Nancy Pelosi, allowing her to jab Sinclair Broadcast Group as not a real news organization and James Rosen as not a real journalist.

In other words, it was more of the route he took toward Dana Loesch and Senator Marco Rubio (R-FL) during the Parkland show trial.

Tapper asked this question after, a hours earlier, Pelosi snapped at Rosen for asking whether she “hates” President Donald Trump:

And here was Tapper’s interjection: “He’s what — he — well I’m not going to comment on that. But yes, it’s a reporter with the Sinclair News.”

Pelosi continued by wondering if Sinclair is a real news organization (she said “news story,” but you know what she meant) and then wax poetic about her Catholic faith and joked about an appropriate use of the word “hate” as a chocoholic “for vanilla ice cream.”

Tapper replied that Rosen was paraphrasing an argument Congressman Doug Collins (R-GA) made about the impetus behind impeachment and Pelosi dismissed that by arguing that “it’s a technique, a tactic that they use” when she’s “rather like to think that America is a country that is full of love.”

Only after another exhaustive question about the exchange and the President’s “nervous fit” tweet did Tapper move on because he “want[ed] to give you a chance to respond.”

To be clear, there were plenty of other questions at the town hall (mostly from college students). For example, Haverford Township, PA Democrat Laura Cavender wondered what recourse the House would have if Trump is reelected even though he would have already been impeached:

In the final few minutes of the town hall, there were two softballs from the left with one about climate change and the other about her legacy (click “expand”):

JOHNS HOPKINS UNIVERSITY STUDENT ADDY PERLMAN: What is Congress doing to ensure my generation will have breathable air, water we can drink, a climate that will not cause massive food shortages, and extreme temperatures that will relegate us to being cave-dwellers. Should fossil [LAUGHTER] — should fossil fuel companies, utilities and other polluters be civilly and — and criminally liable for the damage they are causing to our environment?

UNIVERSITY OF MARYLAND STUDENT ELENA LEVAN: This impeachment process is historical. How do you want to be remembered as a part of it?

To see the relevant transcript from the CNN Town Hall on December 6, click “expand.”

JAKE TAPPER: I do want to ask you though. There was an intense moment this morning when you spoke to reporters. A reporter asked you if you hated President Trump, if that was the motivation for impeachment. You said you don’t hate anybody, and you also said, “don’t mess with me when it comes to words like that,” the word “hate.” Can you — can you share why that seemed to elicit such a strong response from you?

PELOSI: Was that a reporter? Is that what reporters do?

PELOSI: Is that what reporters do? In any event —

TAPPER: — well I’m not going to comment on that. But yes, it’s a reporter with the Sinclair News.

PELOSI: Yeah, Sinclair. Is that news story? The — I was raised a Catholic. My college roommate, Rita Meyer, my college classmate, Mary Beyda are here where they — we — we were raised, and my dear husband, Paul, and dear friend Susan, we were raised in — in a Catholic faith and the word “hate a person” was just — that just doesn’t happen, you know. The word “hate” is a terrible word, but you might reserve it for vanilla ice cream, or something like that, but not, I’m a chocoholic, but not for a person and it is — so, for him, to say that was really disgusting to me and, of course, he was quoting somebody else.

TAPPER: Congressman Collins, Republican on the —

PELOSI: Hiding behind something else.

PELOSI: But I — I think that it’s a technique, a tactic that they use. I’d rather like to think that America is a country that is full of love. Whatever we think about whatever somebody else might believe that might be different from us that that’s not — that isn’t a reason to dislike somebody. It’s a reason to disagree with somebody and our Founders — excuse me, I have a little cold. The — our Founders —

TAPPER: Some water here if you want.

PELOSI: — gave us guidance. They said “E pluribus unum,” “From many one.” They couldn’t imagine how many we would be or how different we would be from each other, but they knew that we had to strive for oneness, so whatever our differences that we try to resolve them in a way that was unifying for our country. That’s what we hope to do, even with this unfortunate necessity, made necessary by the President’s actions in this impeachment to try to do it in a way that makes us worthy of our oath of office, as we honor the vows of our Founders to unify our country.

TAPPER: If you want some water, by the way. You’re right here.

TAPPER: Right, we’re here. I do want to ask you one last question, and then we’ll go to some of the audience members. President Trump referred to that moment, from your press conference, as a “nervous fit” and then, he said — you said that you pray for the President. You’ve said that before.

TAPPER: He said he doesn’t believe that you pray for him, “not even close.”

TAPPER: And I want to give you a chance to respond.

PELOSI: First of all, I hope we don’t have too many questions, me responding to the President’s.

PELOSI: The — the President is a master at projecting. When you call somebody else nervous, he’s the nervous one. When he suspects that somebody’s not praying, he’s probably not praying, but I do pray for him because he is the President of the United States and I pray that God will open his heart to meeting the needs of people in our country. Whether it’s — like today, they’re taking food stamps away from people, or was that yesterday, whether it’s our DREAMers, whether it’s the children at the border that they were putting in cages, separating from their families, please God, please God, open his heart to receive the goodness that it would take to — to share with these people. Also, I pray for his health, and for his safety, and for his family. I do all the time, but it doesn’t bother me what he thinks about that, all the more reason to pray for him.

HAVERFORD TOWNSHIP DEMOCRATIC COMMITTEEWOMAN LAURA CAVENDER: If Donald Trump is reelected, and continues to behave corruptly, and with a disregard for truth, human dignity, and the law, what recourse will the House have, since the impeachment process will already have taken place? What will the checks be on this President if he is re-elected?

UNIVERSITY OF MARYLAND STUDENT JINWOOK HWANG:  As seen from the — as seen from the political atmosphere right now, you’ve seen that the United States has become extremely divided and this question is about how we can unify moving forward. While one side finds it appalling that the President has not been impeached yet, the other side considers it a witch-hunt to be trying to impeach a sitting — sitting President — President. How do you plan on unifying the nation if the — throughout the impeachment process, and what advice do you have for the politician who will succeed you on the keeping the Republic?

JOHNS HOPKINS UNIVERSITY STUDENT ADDY PERLMAN: What is Congress doing to ensure my generation will have breathable air, water we can drink, a climate that will not cause massive food shortages, and extreme temperatures that will relegate us to being cave-dwellers. Should fossil [LAUGHTER] — should fossil fuel companies, utilities and other polluters be civilly and — and criminally liable for the damage they are causing to our environment?

UNIVERSITY OF MARYLAND STUDENT ELENA LEVAN: This impeachment process is historical. How do you want to be remembered as a part of it?