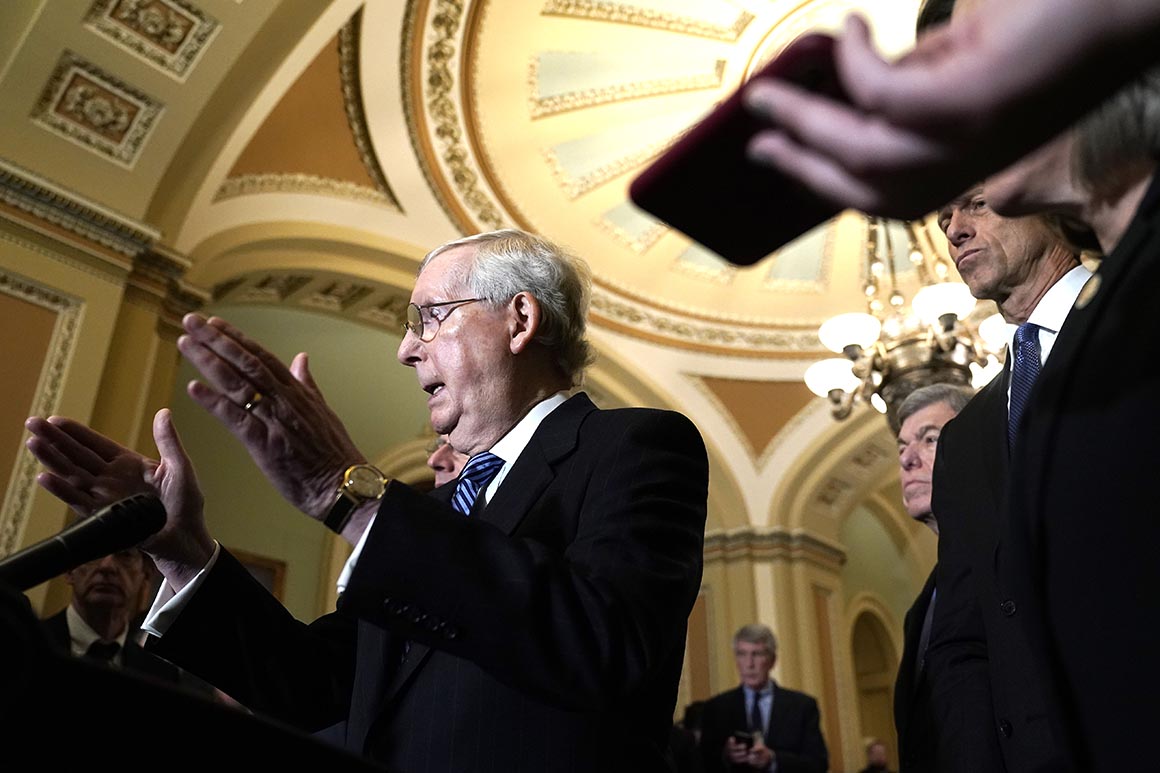 “I don’t feel like we necessarily need all of them. … It becomes a big circus of people and they call John Bolton and we call Hunter Biden. OK. We can do that,” said Sen. James Lankford (R-Okla.). “Is it needed to be able to make a decision based on the evidence we’re looking at right now?”

“If you get into a long convoluted [process], this thing could drag on for a really long time,” said Senate Majority Whip John Thune (R-S.D.). “If both sides get into a bunch of motions about who we bring who [Democrats] bring and we’re having numerous votes on that? I think that’s something, I think, in the end neither side is probably going to be crazy about.”

To establish the ground rules of a Senate trial, McConnell and Senate Minority Leader Chuck Schumer (D-N.Y.) will try and hash out a deal over length and other broad parameters. But when talk turns to calling witnesses, those votes seem likely to be intensely divisive, both between Democrats and Republicans and perhaps among Republicans themselves.

Already, it’s clear Republicans have different ideas about how much deference they believe they should give to the president’s witness requests.

“I don’t even know whether there are going to be witnesses. And it seems the witnesses should be relevant to the inquiry,” said Sen. Susan Collins (R-Maine).

“I would be cautious about limiting the witnesses [Trump] chooses to call. If he’s on trial, he should have the right to call witnesses,” countered Sen. Marco Rubio (R-Fla.). “I don’t know how you go to an accused and say, ‘We’re not going to allow you to call certain witnesses.’ That would make the whole process appear unfair.”

Given the tight margins in the Senate, just three defections from a GOP-only effort will probably tank a vote. Most Republicans believe a tie will result in a failed vote, though Supreme Court Chief Justice John Roberts will preside over the trial and could in theory intervene.

Still, the president will be on friendlier turf when impeachment proceedings move to the Senate. And House Republicans are itching to go on offense after enduring an impeachment inquiry tightly controlled by Democrats.

As Rep. Doug Collins (R-Ga.) was stepping onto a crowded elevator, POLITICO asked him whether he wanted to see Schiff hauled in as a witness in the Senate trial. Before Collins could even respond, several of his Republican colleagues volunteered their own thoughts: “Yes!” they said in unison.

The GOP has zeroed in on calling Schiff and the anonymous whistleblower who first called attention to Trump’s pressure campaign against Ukraine as a way to paint Democrats’ entire probe as politically motivated. In their impeachment report, House Republicans concluded that Trump was right to be skeptical of Ukraine and Hunter Biden’s role on a Ukrainian energy company — a way to justify the president’s push for politically-motivated investigations.

“What the administration wants is the ability to have the American people see what really happened, instead of what Adam Schiff has said had happened,” said Rep. Mark Meadows (R-N.C.), a top Trump ally.