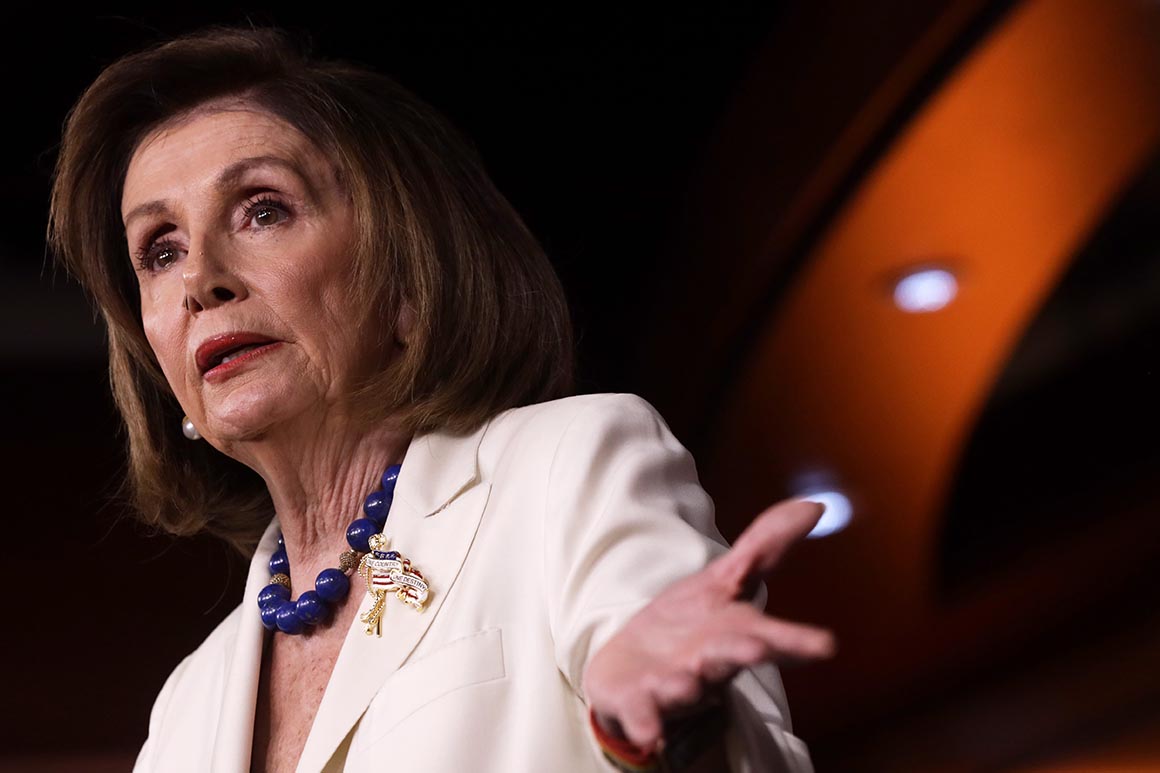 On Thursday, Pelosi jolted Washington by declaring that the House will begin drafting articles of impeachment against Trump — a task that she personally instructed her chairmen to begin. Pelosi stood alone before a bank of TV cameras, flanked by a row of American flags in the same storied spot where she announced the House would move ahead with an impeachment inquiry less than three months earlier.

Yet for the California Democrat, this is not just the latest episode in the long-running and frequently contentious “Trump vs. Pelosi” show. Despite all the shutdowns and the insults, the clapbacks and the walkouts, Pelosi has insisted that she respects the office of the presidency, if not the current occupant of that office. Both in public and private, Pelosi instructs her caucus to remain “prayerful” and somber as they pursue impeachment. Pelosi insists she often prays for Trump.

In a closed-door caucus meeting following her announcement Thursday, Pelosi ended her remarks by paraphrasing a Bible verse from the Book of Jeremiah urging members to “attend to matters of justice.”

“It spoke so clearly to what’s going on that everybody in there went, ‘Oh wow,’” said Rep. Emanuel Cleaver (D-Mo.), a Methodist pastor who often leads the caucus in prayer at the start of meetings. “It was powerful.”

Pelosi has insisted that there is urgency to act because Trump’s behavior — current and past — presents a “threat” to the 2020 elections.

“The president has engaged in abuse of power undermining our national security and jeopardizing the integrity of our elections,” Pelosi told reporters.

But there is something of a contradiction in Pelosi’s handling of impeachment. Pelosi has been reaching out even more regularly than normal with her leadership team and her caucus to listen and to offer updates, a seemingly endless stream of conversations with her colleagues in her office, on the floor, and on the phone.

Some Democrats, however, say they have felt, recently, more like Pelosi is briefing rather than consulting them, often being told of the decision after she has already made up her mind.

Pelosi’s supporters say she has repeatedly demonstrated the seriousness of the undertaking, including in non-scripted moments, like her uncharacteristic burst of emotion on Thursday when she admonished a reporter for shouting a question over whether she hates Trump.

“As a Catholic, I resent you using the word ‘hate’ in a sentence that addresses me,” Pelosi said, pausing as she walked off the stage after a press conference. She then abruptly turned back to the podium, so the whole room — and the cameras — could catch her final remarks.

“Don’t mess with me when it comes to a word like that,” Pelosi added, in a stunning departure from her usually composed demeanor, especially in a televised event.