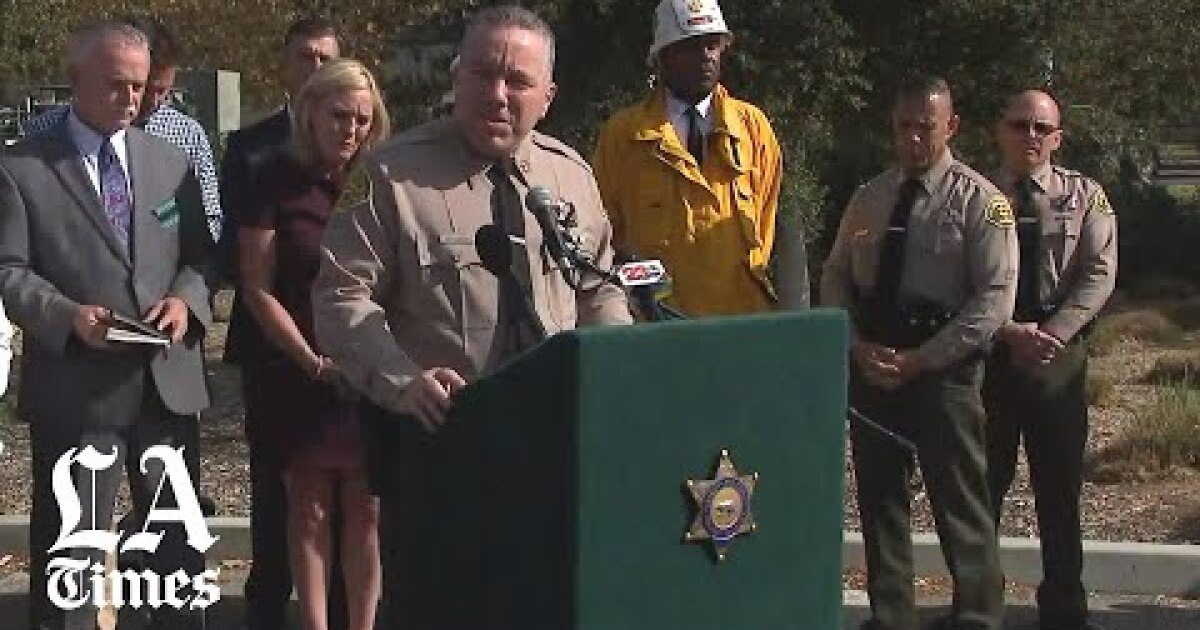 A 16-Second Burst of Violence

A routine day. Shots fired. Lives taken. A community left asking, “Why?” On Thursday, that horrific, familiar scene played out again — this time at Saugus High School in Santa Clarita, where authorities say a 16-year-old known as a cross-country runner and a Boy Scout pulled a .45-caliber pistol from his backpack and shot for 16 seconds.

A 16-year-old girl and a 14-year-old boy died at a hospital soon after. Three other students were injured. The suspect, on his birthday, shot himself in the head.

In the aftermath, students ran, hid and frantically texted, younger children preparing for a Thanksgiving pageant at a nearby elementary school were traumatized, and parents far and wide were once again left searching for how to talk with their kids about a school shooting.

Public impeachment hearings into President Trump will resume today, with Marie Yovanovitch, the former U.S. ambassador to Ukraine, set to testify. The first hearing on Wednesday provided evidence of one of Trump’s most audacious fixations: getting Ukraine’s new president to announce investigations of Trump rivals, including potential 2020 opponent Joe Biden, after Trump had suspended $391 million in congressionally approved security aid to the government in Kyiv.

On Thursday, House Speaker Nancy Pelosi said for the first time that the president’s demands to Ukraine amounted to bribery, an offense that’s listed in the Constitution as impeachable. (She also felt the need to explain the term “exculpatory” to Trump.)

While the impeachment inquiry plays out, Trump has asked the Supreme Court to shield him from part of another investigation: a New York grand jury’s demand to see his tax returns and other financial records. It is the first of two appeals from Trump that seek to protect his tax returns from investigators, and it sets the stage for a constitutional clash over whether the president has an “absolute immunity” from being investigated or prosecuted.

— A second U.S. Embassy staffer in Kyiv overheard a key cellphone call between Trump and his ambassador to the European Union discussing the need for Ukrainian officials to pursue “investigations,” the Associated Press has learned.

— Ten Democratic presidential candidates have qualified for Wednesday’s debate in Georgia, giving voters a smaller lineup onstage to consider even as the party’s overall field expands.

It’s been seven months since thousands of Hollywood writers “fired” their agents to protest longstanding industry practices. With no end in sight to the labor dispute, some talent agencies have found a workaround: They are not selecting writers before they sell new TV projects to studios. Instead, they are building shows around popular books, podcasts and English-language adaptations of foreign-language shows that are attractive to buyers because they come with already proven ideas.

Hot rods. The very word conjures images not just of blazing metal but also of large, gas-guzzling engines. But these days, some hot rodders are cannibalizing crashed electric cars and using their batteries to create electrified sports cars and muscle cars. See how a totaled Tesla can be reborn as an 800-horsepower, all-wheel-drive Shelby Cobra.

On this date in 1964, the Dave Clark Five — the second British Invasion band to hit U.S. shores, after the Beatles — landed in a remote part of LAX ahead of concerts at the Melodyland in Anaheim. The Times reported at the time:

“Fancy footwork by the law and airport officials decoyed hundreds of teenage fans from seeing the newest British singing idols, the Dave Clark Five, arrive at a chilling gale here Sunday morning. Unlike their front-running competitors, the Beatles, whose fans strained safety precautions and policemen’s patience at their last visit, the Clark quintet slipped in on the ‘DC-Five’ (named for them) on a far southeast outpost of International Airport. Large groups of excited teenagers milled around in several different airline terminals looking frantically for the Five.”

For more from The Times’ archives, follow our new account on Instagram — @latimesarchives — dedicated to decades of archival photos from Los Angeles, the West and beyond. Read more about the project and what to expect here.

— The Coast Guard will reconsider federal recommendations that could help prevent boating tragedies like that aboard the Conception dive boat, a leader of the agency told lawmakers Thursday — days after The Times reported it had rejected them.

— The University of California is investigating an allegation by a UC Santa Cruz student that Regent George Kieffer repeatedly squeezed her thigh at a dinner with students.

— Fundraising for LACMA‘s new building has stalled as costs have soared. But the bigger problem with the project is more fundamental, our critic writes.

— Pumpkin spice season is here. Cringing already? Here are seven recipes our cooking editor hates to love, a taste test of many PSL things (including Spam!) and the story of nutmeg in Malaysia.

— Stumped for where to eat in L.A.’s South Bay? Here are some excellent suggestions.

— It’s beginning to look a lot like Christmas at the mall.

— Garden calendar: Botanic light shows and serious soil-prep workshops are among the highlights.

— Mo’Nique has sued Netflix for race and sex discrimination, accusing it of giving her a lowball offer for a comedy special and of a broader tendency to underpay black women.

— Here are a bunch of movies that columnist Glenn Whipp says should earn Oscar nominations for best picture, and one that shouldn’t but probably will.

— “Ford v Ferrari” is a thrilling film that gives its plot and characters room to breathe — “a glorious throwback that combines a smart modern sensibility with the best of traditional storytelling,” our critic writes.

— Lil Nas X made history as the first openly gay black artist to win at the CMA Awards.

— The main thing you, an adult, need to know about the new “SpongeBob” movie is that Keanu Reeves is in it, and its new trailer.

— Laws that punish women for using drugs while pregnant are often billed as a way to protect their babies. New research finds they have the opposite effect, discouraging women from seeking addiction treatment and putting their babies at greater risk once born.

— Did Russia meddle in the 2016 Brexit vote? In this year’s British election season, there’s dismay over a delayed report.

— This holiday shopping season, U.S. retailers will have a hard time predicting consumers’ behavior, especially with rising pressure from Amazon. Here are key trends to watch.

— Google, under pressure from European regulators, will restrict its data-sharing with advertisers to protect people’s privacy.

— These maps show how the Rams dominate the Chargers in Southern California ticket sales.

— When the NFL holds a private workout for Colin Kaepernick this weekend, there are a few teams oddsmakers think are most likely to give him a shot.

— UCLA football kicker J.J. Molson with Utah’s Andrew Strauch will meet on the field Saturday, but their families have a history: the RMS Titanic’s fateful voyage.

— After nearly half a century, the Equal Rights Amendment finally has a chance, thanks to the Democratic takeover of one statehouse, The Times’ editorial board writes.

— Climate change prevention is losing to sprawl in San Diego County, the board also says.

— The U visa is supposed to help protect immigrants and solve crimes. But police are undermining it. (Reveal)

— The first generation of developmentally disabled adults who grew up at home, not in an institution, are now middle-aged. Their parents are getting too old to care for them — and the healthcare system isn’t prepared. (Politico)

Santa Rosa may be the land of Chardonnay, Pinot Noir and Cabernet Sauvignon, but it’s a craft beer that’s getting people a little hopped up. Specifically, one that expresses some profane disdain toward Pacific Gas & Electric. The brewery owner says he’s upset with the executives at the utility after years of devastating fires, but some relatives of PG&E workers have taken exception to the name.