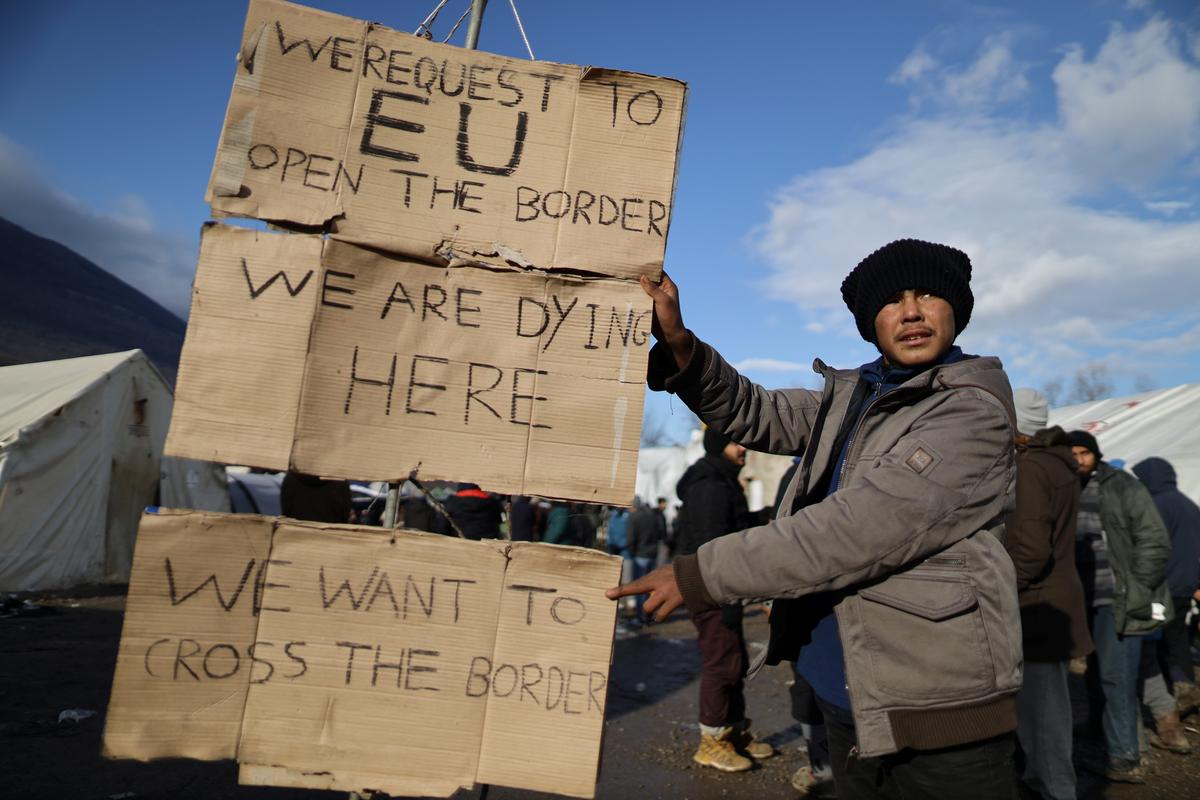 VUCJAK, Bosnia (Reuters) – Bowing to international pressure, Bosnian authorities agreed on Friday to dismantle a makeshift refugee camp of freezing snow-covered tents, but some migrants living there have been refusing food in protest at being resettled.

A migrant is seen next to placards at the migrant camp in Vucjak near Bihac, Bosnia and Herzegovina, December 6,2019. REUTERS/Antonio Bronic

The migrants, who are eager to reach the European Union, say they do not want to be rehoused further away from the Croatian border, which lies just 8 km (5 miles) away.

Some 800 migrants are stuck in the Vucjak camp, a former landfill area in forests near the northwestern Bosnian town of Bihac. Bosnia is struggling to deal with an upsurge in migrant numbers since EU members Croatia, Hungary and Slovenia sealed their borders against undocumented immigration. Close to 50,000 migrants have entered Bosnia since 2018.

Many manage to make it into Western Europe and around 8,000, are currently in Bosnia, most of them in the Bihac area hoping to get into the EU.

“They are closing down the camp but people will not go to another city or another camp,” said Mohammed Sadik, from Afghanistan.

A senior European human rights envoy who visited the area this week said living conditions in the Vucjak camp were “shameful”.

“It is now urgent to relocate these people and provide them with decent accommodation,” Dunja Mijatovic, commissioner for human rights at the Council of Europe, told reporters.

Bosnian authorities said they would move the migrants away from the Bihac area to two facilities near the capital Sarajevo.

“We do not want to go anywhere. If we are going to other camps then let us cross the border. We do not want to stay in Bosnia or Croatia. We are trying to go to Germany, France, Belgium for a better future,” said Abdulah Walli, also from Afghanistan.

Many migrants at the camp were wrapped in blankets, while some walked barefoot through the snow and mud to collect firewood.

Some held banners reading: “We request EU to open the border,” and “We are dying here.”