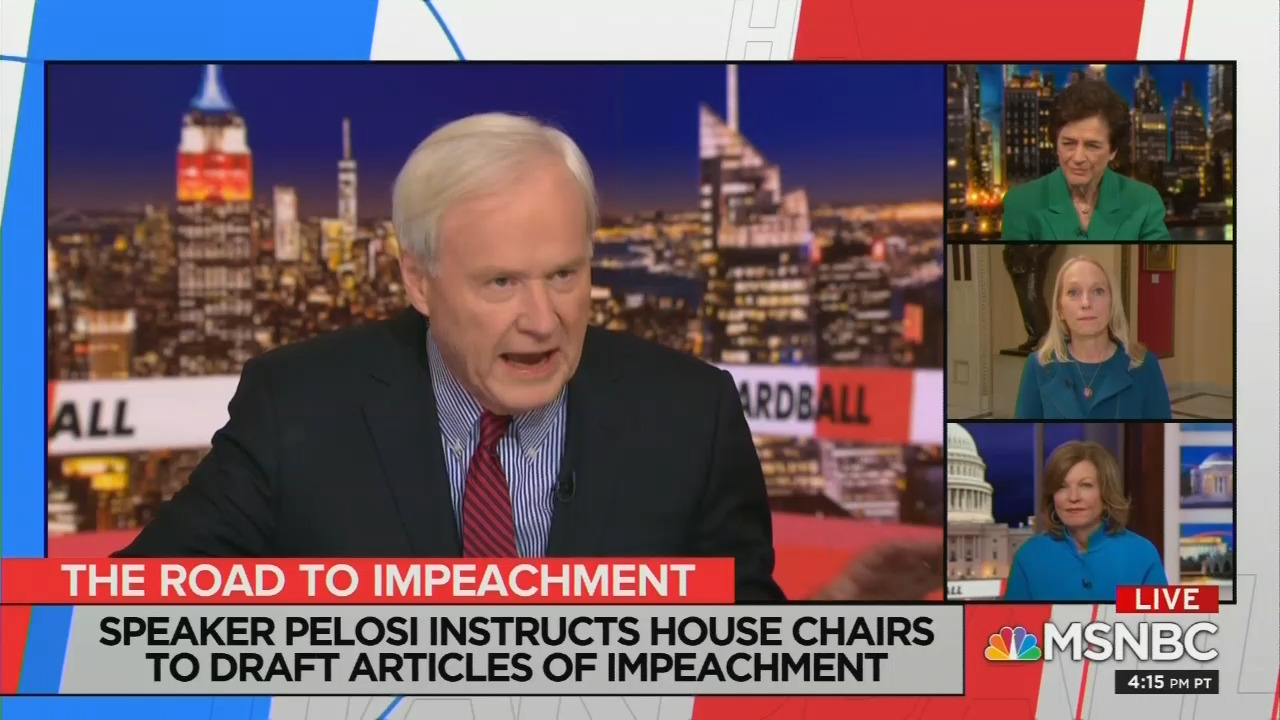 Instead of memory-holing House Speaker Nancy Pelosi’s lashing out at Sinclair’s James Rosen on Thursday morning, the liberal media decided to play it up as a testament to Pelosi’s “stunning” leadership and MSNBC’s Hardball did just that, boasting that she was “fierce” in what “may have been her finest hour.”

Speaking to USA Today’s Susan Page, Matthews disclosed that she’s “writing a book about the speaker” before continuing on with his recent hot streak for Pelosi, boasting that he’s been “really impressed.”

“Her discipline of the party has always been unbelievable….[N]ow I’m watching her pull the reins again. It looks like she said this morning at 9:00, ‘I’m calling the shots, we’re going to impeach this guy,’” he added.

Page hyped that Pelosi’s assertiveness “did not start at 9:00 this morning” as she’s had both “loyalty” from and “very firm control” over her caucus. In a comment that she likely wouldn’t have made if Pelosi had done this to, say, a colleague of hers at USA Today, Page bragged that “we saw in the exchange today how fierce she can be.”

Later, Matthews asked SiriusXM’s Zerlina Maxwell if she saw “how well Pelosi handled the shot today about hating Trump.” When Maxwell said she did, Matthews swooned that Pelosi “had complete control” over the situation and thus owned Rosen or something like that.

To end the show, Matthews portrayed this impeachment inquiry as a heavily-skewed gladiator battle with Pelosi having proven to be far superior:

To see the relevant transcript from MSNBC’s Hardball on December 5, click “expand.”

CHRIS MATTHEWS: The Speaker’s verdict? Impeach him. Let’s play hardball. [HARDBALL OPENING CREDITS] Good evening. I’m Chris Matthews up in New York. Well, the Speaker of the House spoke for the Democrats today and called for the impeachment of the President. Nancy Pelosi began the day directing congressional committees to get busy next week drafting articles of impeachment against Donald J. Trump. In doing so, Speaker Pelosi established herself as the driving force to make President Trump the third American president to be impeached by the House. Pelosi’s declaration today leaves the House two full working weeks before it leaves Washington for the Christmas recess to complete its work for impeachment. She says the House has no choice but to act now in the face of the President’s wrongdoing.

MATTHEWS: Just hours after Pelosi spoke, the Judiciary Committee announced a hearing for next Monday, December 9th to hear impeachment evidence from the House Intelligence committee. That would clear the way for articles to be drafted by the Judiciary Committee and voted on next week in that committee with a vote by the full House the week after. Friday December 20th, by the way is the last scheduled day OF the House session this year. Today Pelosi rebuked a reporter who suggested she is driven by personal antipathy to the President.

JAMES ROSEN: Do you hate the president, madam speaker? Because Representative Collins —

PELOSI: I was raised in a Catholic house.

PELOSI: We don’t hate anybody. Not anybody in the world. So, don’t — don’t you accuse me of anything.

ROSEN: — I did not accuse you.

PELOSI: You did. You did.

ROSEN: I’m not accusing you. I asked a question.

ROSEN: Representative Collins yesterday suggested that the Democrats are doing this simply because they don’t like the guy.

MATTHEWS: Let me go to Susan because I know you’re writing a book about the speaker and I have to tell you having worked in the Speaker’s office myself for a half-dozen years, I am really impressed by this speaker. Her discipline of the party has always been unbelievable. She got ACA through, the most — first Democratic health bill since — what — whenever — since Medicare or Medicaid and she got it through. She got the votes and now I’m watching her pull the reins again. It looks like she said this morning at 9:00, “I’m calling the shots, we’re going to impeach this guy. “Your thoughts.

SUSAN PAGE: You know, that did not start at 9:00 this morning. She has very firm control of her caucus. She has put one of the chairman she trusts the most, Adam Schiff in charge of the investigative part of this. She’s the one who made the announcement they’re going to draw articles of impeachment. She does defer to the chairman of the committees on some issues, but she — she not only wants to be in control of this caucus, she is. She has the loyalty of the caucus behind her. We may see a defection or two, just a handful of Democrats on this impeachment vote, but not very many and it is — it does reflect what we saw on previous — when she got TARP through, which was on behalf of President Bush, a President she rarely agreed with. She got the Affordable Care Act through. When the Obama White House was ready to reduce the breadth of the bill and she said no, we’re going to try to get the whole thing through. So, yes, this is a test of her speakership and we saw in the exchange today how fierce she can be.

MATTHEWS; I’m listening to a person writing a biography of Nancy Pelos and I can see the work you’ve done already, Susan. Thank you for that. Anyway, Speaker Pelosi stressed the chairman of several key committees will make recommendations on articles of impeachment and today she met privately with Judiciary Chairman Jerry Nadler and Intelligence Chairman, of course, Adam Smith — Adam Schiff as Susan just mentioned along with the chairs of four other committees who have been investigating the President. Pelosi was asked if she’d support including elements of the Mueller report in the articles of impeachment in the next two weeks.

MATTHEWS: Well, that was interesting, Congresswoman, because I got the sense that when the Speaker was going to announce something at 9:00 this morning she was grabbing the reins and she was saying, “let’s not spend the next week arguing whether we go back to Mueller, whether we enlarge it into a long list of litany really of articles, or do we stick to the main focus. We caught the President abusing his authority, abusing his power. We caught the President in a bribe situation. We’ve got him. Let’s not mess this up with a lot of other issues. Do you have a sense she still wants to go in that narrow particular direction?

MATTHEWS: Yeah, I think it’s like — I was saying today in our staff meeting today with my producers it’s like when you say head of cattle, you mean whole cattle. When you say hands at a ranch, you mean the whole ranch hand. Everybody’s working. In a sense when you hit him on a couple of things, you’re really talking about a much larger pattern of behavior. By the way, Donald Trump is Donald Trump and if he gets away with this, he’ll do it again. Anyway, thank you U.S. Congresswoman Mary Gay Scanlon of Pennsylvania. Susan Page, what a book it’s going to be and you’ve got some great stuff today. I think it may have been her finest hour this morning already.

MATTHEWS: Did you see how well Pelosi handled the shot today about hating Trump?

ZERLINA MAXWELL: She did, yeah.

MATTHEWS: And she turned the guy and said, as a Catholic, I resent that. She had complete control.

MATTHEWS: In the next two weeks, we will witness a battle between a Speaker of the House with leadership ability and a President who should fear it. Nancy Pelosi continues to display the attributes that matter. Let’s look at them. First, timing. She opposed impeachment until she saw a clear cut case to justify it. That was Donald Trump’s attempt to shakedown the president of Ukraine by demanding he smear Joe Biden. Second, focus. She has kept the hearings targeted to that case of presidential bribery. Lastly, discipline. Speaker Pelosi won the endorsement for the impeachment inquiry from all but two Democratic members of Congress. Her leadership in this historic moment has been stunning, and it should terrify Donald Trump. I remember when Richard Nixon learned that Tip O’Neil, my old boss was running the impeachment drive against him. He said that was when he knew he was in trouble. So here’s Trump’s problem. He’s got Nancy Pelosi on his tail. She’s got the timing, the focus, and the party discipline and there’s not a thing in the world he can do about it because there’s one big difference between Trump and Nixon. Dick Nixon was at least smart enough to know who and therefore what he was up against.