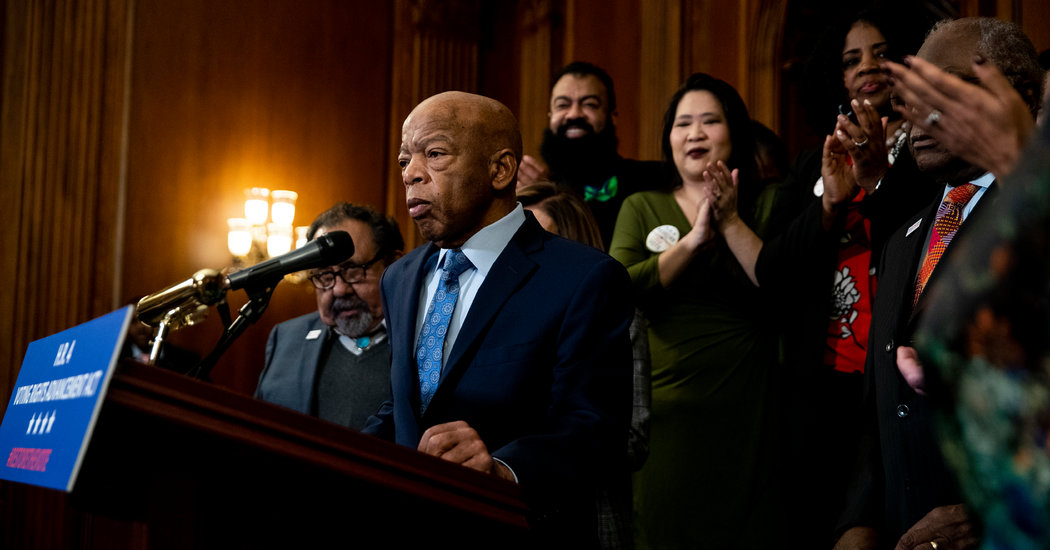 WASHINGTON — The House voted on Friday to reinstate federal oversight of state election law, moving to bolster protections against racial discrimination enshrined in the 1965 Voting Rights Act, the landmark civil rights statute whose central provision was struck down by the Supreme Court.

Representative John Lewis, Democrat of Georgia, who was beaten in 1965 while demonstrating for voting rights in Alabama, banged the gavel to herald approval of the measure, to applause from his colleagues on the House floor. It passed by a vote of 228 to 187 nearly along party lines, with all but one Republican opposed.

The measure was a direct response to the 2013 Supreme Court case Shelby County v. Holder, in which the justices invalidated a key portion of the law. They asserted that the federal oversight of elections was no longer necessary in nine states, mostly in the South, because of strides made in advancing voting rights since passage of the 1965 law.

The original Voting Rights Act, signed by President Lyndon B. Johnson as a centerpiece of his civil rights agenda, was meant to bar states from imposing poll taxes, literacy tests and other methods to keep black people from voting. Democrats argued that while such overt barriers are gone, they have been replaced by stricter voting laws adopted by 25 states since the Shelby decision.

“Selma is still now!” thundered Representative Terri A. Sewell, Democrat of Alabama, the chief sponsor of the measure, during debate on the measure on the floor. “I know I’m not the only black and brown colleague of ours who owes their very presence in this chamber to the Voting Rights Act passed in 1965.”

Republicans, for their part, argued that the bill would trample on states’ ability to dictate their own election rules by abusing measures in place to prevent voter disenfranchisement.

“The bill before us today would turn those federal shields that protect voters into political weapons,” said Representative Doug Collins of Georgia, the top Republican on the House Judiciary Committee, adding that the legislation would do so “when there is absolutely no evidence whatsoever that those states or localities engaged in any discriminatory behavior when it comes to voting.”

The debate underscored the deep partisan polarization that has taken hold on issues related to voting and elections in recent years. In 2006, the last time the Voting Rights Act was updated, the measure passed overwhelmingly in the House, where large majorities of both parties supported it, unanimously passed the Senate, and was signed into law by a Republican president, George W. Bush.

In the Shelby case, Chief Justice John G. Roberts Jr. wrote that Congress remained free to try to impose federal oversight on states where voting rights were at risk, but must do so based on contemporary data. The measure passed on Friday was an attempt to do just that.

Specifically, it would update the parameters used to determine which states and territories need to seek approval for electoral procedures, requiring public notice for voting changes and expanding access for Native American and Alaska Native voters.

But it is unlikely to come to a vote in the Senate, where Senator Mitch McConnell, Republican of Kentucky and the majority leader, has refused to take up most legislation championed by House Democrats.

Still, Democrats saw its passage as a significant victory and an important statement of their principles — as well as evidence that they can legislate while also preparing articles of impeachment against President Trump.

With the number of legislative days in the year dwindling into the single digits, Democrats are rushing as much work as they can across the House floor to keep the government running and maximize a record of accomplishments they can show voters before the 2020 elections.

H.R. 4, formally titled the Voting Rights Advancement Act and given a low number by Democrats to reflect its priority on their agenda, was the product of a series of hearings in eight states and Washington, as well as hours of testimony. Black Democrats and those who are old enough to remember the debate over the 1965 bill spoke about the new legislation with passion — and a sense of history.

“I have been thinking a lot this morning about my growing up in South Carolina,” said Representative James E. Clyburn, 79, the No. 3 House Democrat, describing how he drove to a tiny town in his native state to see the Rev. Dr. Martin Luther King Jr. speak, just a few months after Johnson signed the 1965 bill into law.