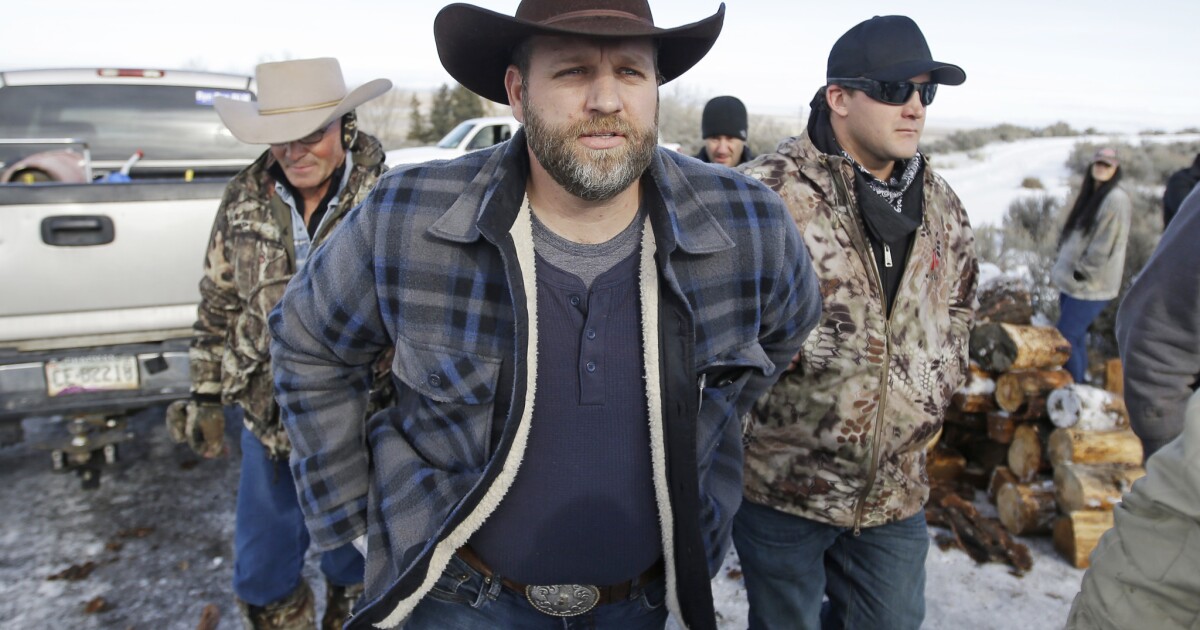 Ammon Bundy, the far-right activist who led an armed takeover of federal land in Oregon, urgently warned followers this week to gear up for another big property-rights standoff in Idaho.

Bundy, the bearded man in a cowboy hat whose compatriots occupied Malheur National Wildlife Refuge in 2016, rushed with allies to a northern Idaho ranch, telling his large social-media following to get ready to join them.

In Orofino, Idaho, Bundy prepared to rally to the cause of Donna and Charles “Nick” Nickerson and their family, who said that sheriff’s deputies with AR-15s had evicted them Tuesday as a result of a foreclosure. But after arriving Wednesday and spending a day poring over court documents and talking to the couple and the sheriff, the brash property rights advocate abandoned the cause.

“If we are wrong, as moral men, we pray that the family and that God will forgive us,” Bundy said in a 17-minute “final update” Facebook video Thursday morning. “And now we are going home.”

The Nickersons did not immediately respond to a request for comment.

The about-face by Bundy was an uncharacteristic reversal for the anti-government activist, whose family has staged multiple armed standoffs against the government. He also took part in a 2014 standoff in Nevada led by his father, Cliven Bundy, who resisted law enforcement officers attempting to seize the elder Bundy’s cattle over $1.2 million in unpaid fees for grazing on federal land.

This time, Ammon Bundy, who lives in Emmett, Idaho, northwest of Boise, traveled 250 miles north to Orofino, in Clearwater County. The town of 3,000 at the Nez Perce Reservation is 140 miles southeast of Spokane, Wash., near a historical camp where in 1805 the Lewis and Clark expedition embarked in canoes on the Clearwater River for the Pacific Ocean.

Bundy said in a Facebook video Wednesday that he had arrived at the Idaho ranch that day with other men including Eric Parker, president of the Real 3% of Idaho, part of the far-right Three Percenters militia organization. As Bundy waited in his truck, he said, his companions were greeted by a man who said he was taking care of the ranch and its animals following the eviction.

Bundy said that he met with Donna Nickerson, who was camping with her family near the ranch, and that she told him the family had kept current on their payments, but nevertheless there were problems with Chase bank.

The bank “attacked us on every front,” a post on the family’s website said. “We called for help, but no one came. No one stepped forward to enforce the laws that could shield our family and end the abuse.”

On Wednesday, Bundy said in a Facebook video that while he needed to conduct more research, the family’s case appeared legitimate.

“I’ve seen enough to know that there is something pretty deep going on here,” he said. “It might need a whole bunch of people coming here and demanding that these things get straightened out.”

But Bundy reversed himself in Thursday’s video post. He said in the video that he understood, after reviewing documents and speaking with Sheriff Chris Goetz, that the family had missed opportunities to reclaim their property by paying a mortgage company that acquired it from Chase — and had received multiple warnings to vacate.

“They knew several months back that this was coming,” the sheriff told local reporters this week.

“It is our determination that the Nickersons did not uphold their obligation to the contract,” Bundy said, “and that forceful removal of the family from the property was warranted to protect the rights of the bank’s shareholders.”