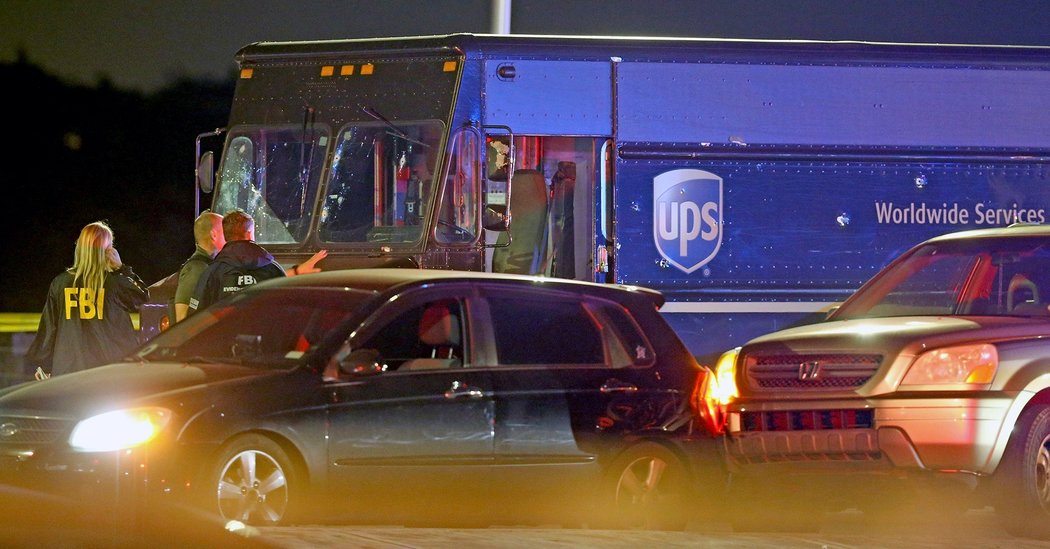 Four people were killed on Thursday during a televised shootout on a traffic-choked roadway outside Miami after an attempt to rob a jewelry store ended in the hijacking of a UPS truck, the kidnapping of its driver and a police chase across two densely populated South Florida counties.

The exchange of gunfire in Miramar, Fla., killed the UPS driver as well as the two carjackers who kidnapped him, according to George Piro, the special agent in charge of the F.B.I.’s Miami field office, who spoke at a news conference on Thursday. He said the fourth person killed was a bystander.

Video of the shootout, which pitted more than a dozen law enforcement officers against the carjackers, who fired from inside the stolen truck, was broadcast by television networks in South Florida and circulated widely online. The video shows occupants of other vehicles scrambling as gunfire erupts around them during the afternoon rush in Broward County.

Law enforcement officials declined to publicly identify the deceased or to provide information about the weapons used in either the shootout in Miramar or an earlier exchange of gunfire between the carjackers and the owner of the jewelry store they tried to rob in Coral Gables.

“It is very early in the investigative process,” the special agent said. “There are a lot of questions that are still unanswered, and we will be working throughout the night as we not only process the crime scenes but also try to identify all the evidence and facts associated with this robbery.”

The episode began shortly after 4 p.m., when the two carjackers burst into Regent Jewelers, a shop on “Miracle Mile,” an upscale shopping destination in Coral Gables, in Miami-Dade County, Chief Edward J. Hudak Jr. of the Coral Gables Police Department said at a news conference. Police officers responded to reports of the robbery within a minute and a half, but by that time the robbers and the shopkeeper had opened fire on each other and the robbers had fled.

The chief said that at least two employees, a man and a woman, were in the store at the time of the robbery, and that the woman was injured. He said it was not clear if the suspects had succeeded in stealing anything from the store before they fled.

The melee continued as the robbers fled the store, with gunfire striking a window at City Hall, which is across the street from the jewelry store, according to Chief Hudak. The suspects left the area in a truck but soon abandoned it and hijacked the UPS truck at gunpoint, kidnapping its driver as well, he said.

“The only thing we know is that the UPS driver, we believe, was doing a delivery here in Coral Gables,” the chief said. “The getaway truck that was used was found in that location and has been secured by the Coral Gables Police Department.”

UPS confirmed the death of the driver in a statement, but did not release his name.

“We are deeply saddened to learn a UPS service provider was a victim of this senseless act of violence,” the company said. “We extend our condolences to the family and friends of our employee and the other innocent victims involved in the incident. We appreciate law enforcement’s service and will cooperate with the authorities as they continue the investigation.”