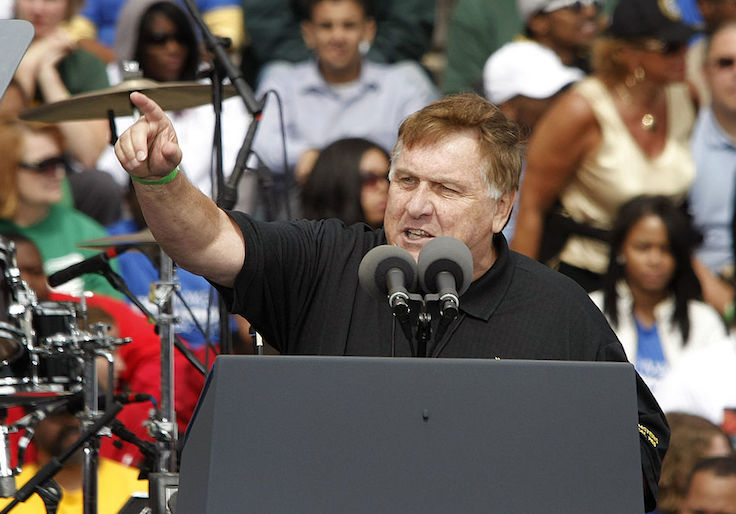 Hoffa, son of infamous labor leader Jimmy Hoffa, has faced numerous accusations of corruption both internally and from federal investigators since he was first elected general president in 1998. A 2004 investigation of the Chicago Teamsters brought forth allegations of rampant corruption, including mob influence and kickback schemes. Recently, Hoffa confidante and union leader John Coli pleaded guilty to extorting a Chicago film studio, threatening worker strikes if the company refused to make quarterly payments of $25,000.

The union did not respond to a request for comment.

Despite the union’s history, top Democratic presidential candidates are wooing Hoffa for his endorsement. Former vice president Joe Biden, South Bend mayor Pete Buttigieg, Sen. Bernie Sanders (I., Vt.), and Sen. Amy Klobuchar (D., Minn.) will attend a Saturday forum hosted by the labor leader and live-streamed by the U.K.-based Guardian. According to Hoffa, candidates are expected to “tell Teamsters directly why they are the leader who will effectively push” for pro-union policies.

“Candidates know the importance of the Teamsters vote in any election, and our members are fully engaged and ready to make a difference in the 2020 election,” Hoffa said in a release.

The candidates will be looking to appeal to one of the Democrats’ most crucial constituencies—union voters—as well as secure the extensive financial resources controlled by labor leaders. Biden’s presidential campaign has already received $1,700 from Teamsters, and Biden took $10,000 from the union in 1990 as a Delaware senator. Sanders has received more than $107,000 from the union throughout his political career, with Klobuchar raking in $30,000.

The Klobuchar, Buttigieg, and Biden campaigns did not respond to requests for comment. A Sanders campaign spokesman declined to answer questions about corruption allegations and federal probes into Teamsters leadership.

Since taking control of the International Brotherhood of Teamsters, Hoffa has been reelected four times despite issues of corruption and mismanagement. In 2005, Hoffa made Coli, the Chicago union executive, a member of his presidential slate despite Coli’s alleged role in shutting down the union’s anti-corruption program, according to the Teamsters for a Democratic Union, a reform group. Coli’s local chapter was under federal investigation at the time, yet Hoffa groomed him as a top union leader.

Coli went on to plead guilty to receiving illegal payments and filing a false income tax return after extorting $325,000 from Cinespace, a Chicago-based film studio. Coli received quarterly payments of $25,000 by threatening Teamsters strikes at the studio, telling Cinespace president Alex Pissios “I will f—ing have a picket line up here and everything will stop” if Pissios stopped paying Coli.

Coli was known for his influence over Illinois’s top elected officials, including former Democratic governor Pat Quinn. One of Coli’s political allies, Illinois state senator Tom Cullerton, was indicted in August for allegedly accepting nearly $275,000 in salary and benefits for a do-nothing job offered by Coli.

Hoffa has also been at odds with his own workers at the negotiating table, ratifying two contracts between Teamsters and the United Parcel Service even though a majority of workers rejected the company’s offers. Union workers disapproved of concessions made by Hoffa, including a proposal to hire “hybrid-drivers” who would make less than other full-time drivers and be denied weekend overtime pay.

One candidate scheduled to attend the Teamsters forum allegedly holds a deeper connection to Teamsters corruption. Frank Sheeran, the late Teamsters official and confessed mafia hitman claimed that he helped elect Biden to the Senate in 1972, according to the book I Heard You Paint Houses—the inspiration for the Netflix movie The Irishman. When Biden’s Republican opponent paid to insert an ad in a Delaware newspaper just before the election, Sheeran organized a picket line to stop the newspaper from circulating.

“The day after the election the informational picket line came down, and the newspaper went back to normal and Delaware had a new United States Senator,” Sheeran said of Biden, adding “you could reach out for him, and he would listen.”

To receive an invitation to the forum, candidates had to sign the union’s three-point pledge, a commitment to “protect the rights and strengthen the ability of workers to join a union” and “advance legislation to protect pensions and solve the multiemployer pension funding crisis,” among other policy promises.

“The debate will no doubt focus on ways taxpayers can bailout chronically underfunded union pensions such as the historically mismanaged Teamsters Central States pension plan,” Vernuccio said. “With income of over $200 million and assets of over $335 million last year, the Teamsters should dip into their own pockets to honor the promises they made to their members before asking taxpayers to pay the bill or asking retirees to take a cut in benefits.”

A spokesman for the Guardian declined comment about the forum, referring the Washington Free Beacon to a press release in which Guardian U.S. editor John Mulholland praised Hoffa and his organization.

“We are pleased to partner with the Teamsters union to host a special town hall event where workers’ voices will be heard,” he said.