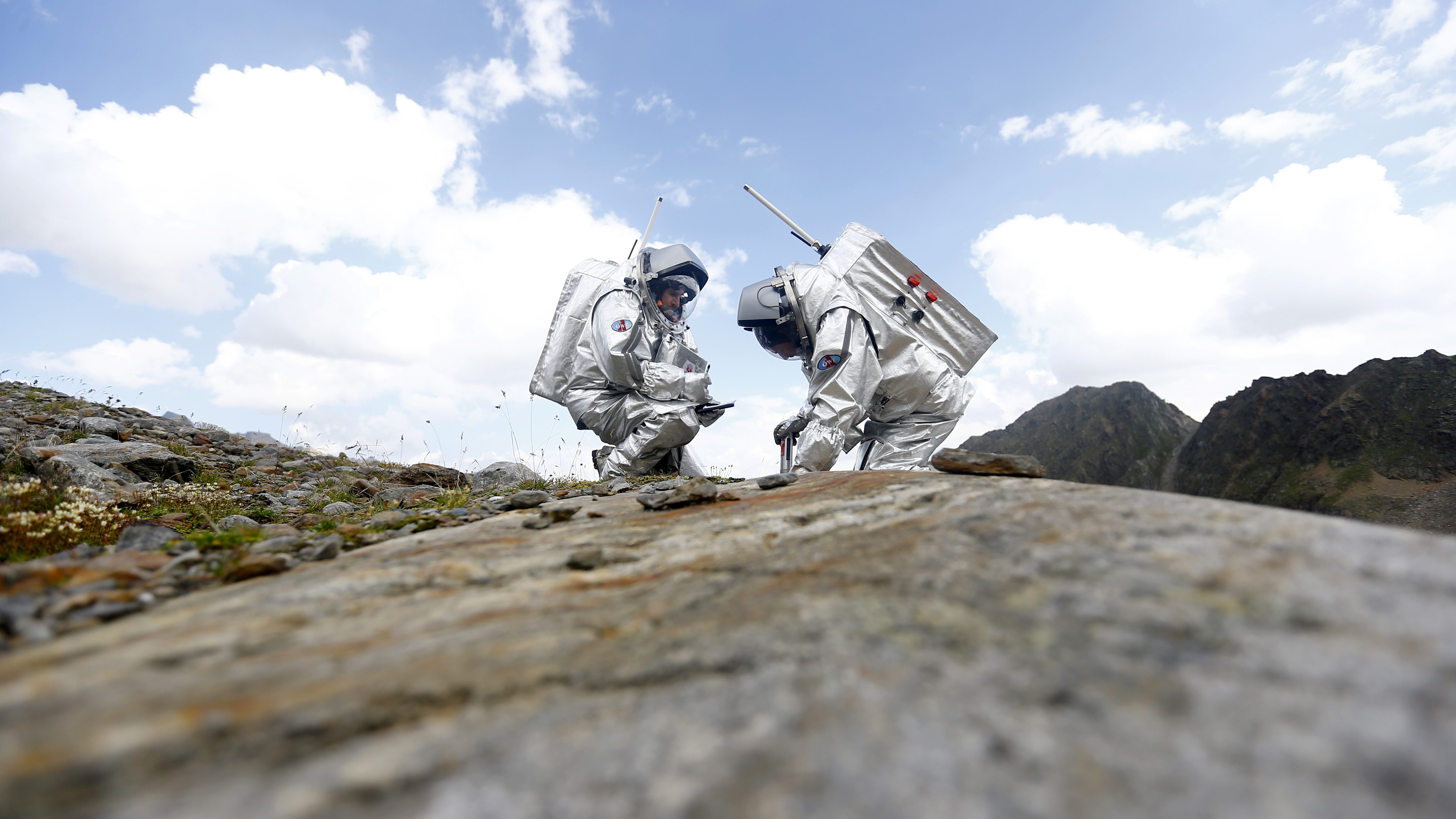 Whether or not humans will colonize Mars in the near future is no longer a matter of debate.

But what’s a lot less certain is exactly how we’ll pull it off.

There’s a good deal of skepticism about the merits of breaching this next space frontier in the scientific and commercial communities alike. And with good reason: On our own planet, the world is burning (literally in California, the Amazon, and Indonesia to name a few current locations), our ice caps are melting, and around the globe species are dying out.

This is all to say, there are plenty of problems on Earth that need fixing before we imprint ourselves on another planet. Should we really be spending money and resources on space exploration when we haven’t adequately addressed our own terrestrial crises?

And, is colonizing another planet really the answer to the potential extinction of our own?

Mars: We need a solution for creating breathable air, similar to what’s used on the International Space Station (ISS) or potentially even using Mars’ atmosphere. MOXIE, or the “Mars Oxygen In-Situ Resource Utilization Experiment,” is part of NASA’s Mars 2020 Mission to see if we can use the planet’s thin carbon dioxide atmosphere to manufacture oxygen.

Mars: We need to extract water that is currently frozen on the surface, through the use of either drilling extractors or microwave vaporizes. This has been tested on Earth but never on Mars.

Mars: We need solutions for artificial sunlight that can help grow plants, as well as soil supplements that can help make Martian soil hospitable for Earth-based plants. Concurrently, we will require farming structures that can absorb and release excess oxygen from plants. The director of Utah State University’s Plants, Soils, and Climate department, Bruce Bugbee, is currently researching this and has successfully farmed lettuce in space.

Mars: We need to create specialized habitats that are able to withstand radiation, create an Earth-like gravitational environment, and provide a sense of home. NASA is allocating $30 million over the next five years to Habitats Optimized for Missions of Exploration (HOME) and Purdue University’s Resilient ExtraTerrestrial Habitats Institute (RETH) to look into this challenge.

Earth: Abundant (unless you have a newborn baby).

Mars: We need to develop external suits that stop muscular degeneration, reduce the impact of radiation waves, and respond to a lessened gravitational force. So far, a good candidate for materials to create such suits is something called hydrogenated boron nitride nanotubes (BNNTs), made up of carbon, boron, and nitrogen floating in hydrogen.

Earth: Abundant (but the fashion industry has been named the second-biggest polluting industry on Earth).

Mars: We don’t know yet if we can reproduce in space.

Earth: Abundant (but rapid population growth is stressing our resources).

As you can see, many of these elements are abundant within our native habitat on Earth. But on Mars, we need to find a way to create them. From scratch.

Needless to say, the challenges of colonizing Mars are many. As are the costs: Year-over-year, NASA’s budget for space exploration has been increasing in an effort to put people back on the Moon, with an eye toward the long-term exploration goal of setting up life on Mars.

In 2020, NASA plans for a $22.6 billion budget, which will include $6.3 billion earmarked for space exploration—that’s up 27% from the year prior. Within that, $546.5 million is allocated for the organization’s Mars Exploration Program, of which $278 million is slated for the Mars 2020 rover and $109 million to begin forming the next mission in a Mars sample return campaign.

And this is not nearly all the money being spent on the effort to colonize the red planet; there is also substantial private, academic, global, and national level investment going into the project.

Imagine all the things we could do on Earth if we allocated an extra $22.6 billion to addressing climate change on our own planet?

For every dollar invested in NASA research there is an $8 to $10 return for people on Earth.

According to a recent report by Morgan Stanly, we apparently need $50 trillion spread across five areas of technology by 2050 if we want to slash emissions and meet the Paris Agreement’s goal of halting global warming. United Nations scientists say we need $300 billion to reclaim degraded land that could offset emissions to buy time to deploy zero-carbon technologies.

But of course, none of these figures are likely accurate, either. How could they be? We have no way of knowing with certainty the enormity of the climate change problem in the years to come. Just like the actual cost of colonizing Mars, we can expect the cost of mending our atmosphere to be far more expensive than any of the official projections.

The truth is, comparing these two missions—fixing climate change versus financing space exploration—doesn’t do us much good. It’s not a question of either saving Earth or colonizing Mars, and it never has been.

What if we ask instead about how can we work as a global population to solve the world’s biggest problems. Is it possible to look at colonizing Mars and saving Earth as two parts of the same challenge?

We might not be able to comprehend the enormous cost either missions will require, but what we do know is that for every dollar invested in NASA research, there is an $8 to $10 return for people on Earth in the form of new technologies and inventions.

The Apollo program helped super-charge the development of the microchip (among other things), which helped create the semiconductor industry, which lead to the modern computer industry, cell phones, and other devices. These industries have connected humans in ways that were previously unconceivable and substantially changed how we live.

NASA investments don’t have merely economic benefits such as new technology markets. They have contributed significantly to the progression of life on Earth and in outer space. Cell phones, computers, microwaves have all changed the way we live and made life easier and more connected. And this will only continue.

NASA and other space-based programs allow for scientific breakthroughs that change human life.

Recently, a team of specialists working for Grattoni Labs were able to test a new nano-medical dispersal device onboard the International Space Station. Because researchers were able to remove the human error, the result was a product that could substantially improve the efficacy of HIV treatment.

As long as we continue to poison our air and water systems and create mass desertification on Earth, then the problems we are solving for on Mars are also the problems we’ll need to solve for on Earth.

We will need to know how to create clean oxygen, how to extract drinking water in new ways, and how to create clothing that can deal with conditions far more extreme than what we face now. We will require new habitats, new farming methods, new means of transportation, new fuels—the list goes on.

What NASA’s progress shows us is that well-managed, concerted efforts yield better results over time. The $22.6 billion US dollar NASA budget is .4% of the Department of Defense’s budget. The proposed $300 billion global climate action budget is dispersed throughout a number of institutions, organizations, and private companies, but progress is far less encouraging.

I’m not saying we should defund NASA or curb private enterprises that seek to solve giant problems; but we should be asking ourselves how we can better manage and consolidate funds from government organizations and private institutions that are focused on achieving big goals— like tackling climate change.

Perhaps our modest investment in Mars exploration will drive breakthroughs that bring down the seemingly impossible price of climate change in ways we can’t even understand at this point. History suggests that when humans put efforts into tackling giant problems, we often create solutions to problems that previously seemed impossible.

And if that fails, we will be thankful for the money that NASA has spent on creating livable societies in inhospitable worlds—even it that’s our own planet.