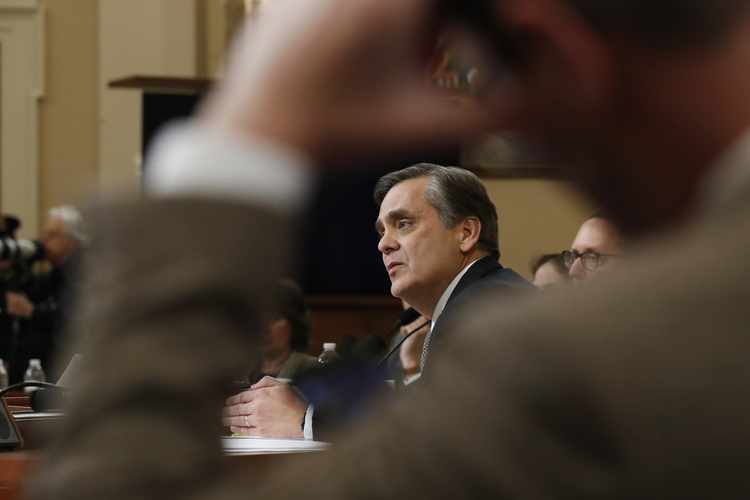 The Democratic majority on the House Judiciary Committee lined up three witnesses on their first day of impeachment hearings. The Republican minority was allowed only one. To defend the president, GOP lawmakers somewhat incongruously called an elite liberal legal scholar from Washington, D.C.

Their witness said he didn’t particularly like Donald Trump, and even told the Republicans who summoned him that soliciting electoral advantage from foreign powers is out of bounds. But Jonathan Turley became the answer to conservative prayers Wednesday, even after starting his testimony with what he called “an irrelevant fact”: “I’m not a supporter of President Trump. I voted against him.”

The George Washington University law professor then pivoted to a larger point. “My personal views of President Trump are as irrelevant to my impeachment testimony as they should be to your impeachment vote,” Turley told committee members. “President Trump will not be our last president, and what we leave in the wake of this scandal will shape our democracy for generations to come.”

Knowing his sentiments, Democrats on the panel had steered clear of Turley, mostly quizzing the three other liberal legal scholars. Noah Feldman of Harvard Law School, Michael Gerhardt of the University of North Carolina School of Law and Pamela Karlan of Stanford Law School all agreed that Trump had committed impeachable offenses.

Only Turley dissented. For that reason, he was shut out of the first 45 minutes of questioning except for one yes-or-no question. When Turley tried to elaborate, the Democratic counsel shut him down.

“You’re now well rested,” ranking member Doug Collins told the legal scholar when Republicans finally got their turn to ask questions. Was there anything he would like to respond to from the initial round of inquiries that skipped over him?

“It’s a challenge to think of anything I was not able to cover in my robust exchange with majority counsel,” Turley quipped. “But I’d like to try.” And then he held forth, explaining why it would be improper to impeach Trump, a president whose actions he didn’t think were particularly proper.

What followed was as much of a point-by-point rebuttal of his fellow witnesses as it was a warning not to indulge partisan impulses. Impeachment would be wrong because all the facts of the case are still unknown, he said, and impeachment would be dangerous because of the breakneck speed the House majority has established for the process.

–If Democrats want to impeach, they must to go slower: “Fast and narrow is not a good recipe.”

–If Democrats want to accuse Trump of bribery — of trading foreign aid and a White House meeting for political favors — they need more evidence: “You need to make it stick because you’re trying to remove a duly elected president of the United States.”

–If Democrats want to charge Trump with obstruction of justice by refusing to comply with subpoenas, they ought to willingly fight him in court, a legal avenue rightly open to the president: “If you impeach a president, if you make a high crime and misdemeanor out of going to the courts, it is an abuse of power. It’s your abuse of power.”

Turley made clear he does not necessarily believe Trump should not be impeached. It could happen eventually, and the professor has even advised Democrats on how to do it. In a USA Today op-ed published a week ago, Turley wrote that abuse of power is an impeachable offense “but it is the most difficult of potential impeachment claims” to prove, one that requires Democrats to gather more compelling evidence and to put together a clearer timeline. But the current charges, he concluded, are “neither complete nor compelling on proof of an impeachable offense.”

If Trump survives for a second term, it is possible that Democrats will take this pro-bono advice and give impeachment another try. But those lawmakers were in too much of a hurry Wednesday, and a potential critic of the president became his best defender.

Throughout the hearing, Trump allies churned out a steady stream of opposition research on three of the witnesses. Gerhardt’s law students were so distressed by Trump, he had said in an interview two weeks after Inauguration Day, that they “were still in therapy.” Feldman said on cable television he’s “a registered Democrat and have been my whole life.” Karlan is suing the administration in a case before the Supreme Court.

But, not surprisingly, these allies held their fire on Turley. They said that the fact he set his personal views aside only made his testimony more were compelling.

“Professor Turley, no fan of President Trump, has methodically taken apart the Democrats’ entire case, revealing it is Democrats who are abusing power by jamming through an impeachment with no crime,” Republican National Committee spokeswoman Liz Harrington told RealClearPolitics.

Jason Miller, a senior adviser on the Trump first campaign who now co-hosts a radio show with Steve Bannon, said the same. “Jonathan Turley is not a Trump supporter,” Miller told RCP, “and yet he made the strongest defense of the President today simply by sticking to legal interpretation showing there was no quid pro quo, no obstruction or any of the other insane claims made by Democrats.”

For one day, at least, all corners of Trump world were united in a most unusual way: celebrating the testimony of a Trump skeptic from, as the East Coast liberal himself said, “an Ivory Tower in the swamp” of Washington, D.C.