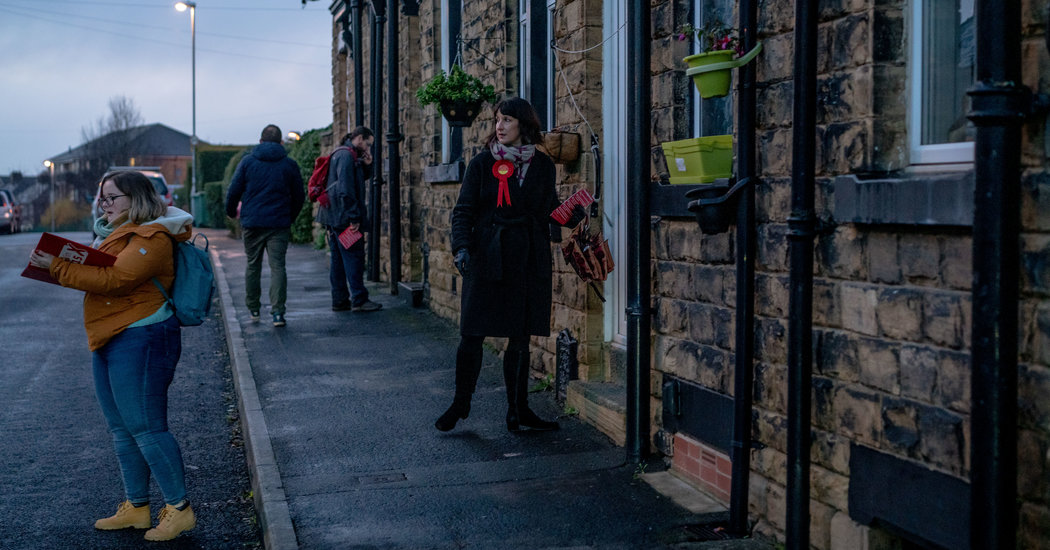 LEEDS, England — The campaign office is deliberately inconspicuous — tucked above a salon through an unmarked doorway in a 1970s-era shopping center. There are no campaign posters in the windows. Two cameras are trained on the entrance. The door frame was recently reinforced.

They are necessary precautions, said Rachel Reeves, the Labour candidate who has represented this area of Leeds in Parliament since 2010 and uses the space as both her constituency office and now as her campaign headquarters.

The death threats, abuse on social media and graffiti calling for “traitor” lawmakers to be hanged have changed her approach ahead of Britain’s upcoming general election. This is the new reality, she and other lawmakers say, in a campaign environment that has become remarkably nasty, particularly for women, who face a torrent of abuse and threats often laced with misogyny. And it is happening across the political spectrum.

“I do think it’s a very different atmosphere and environment now compared to the first two times I stood,” Ms. Reeves said. “People are a lot angrier and there’s a lot more polarization, particularly around the Brexit issue.”

In the dwindling days before Britain heads to the polls, candidates, particularly women, are finding themselves campaigning in a climate where they say abuse, threats and a culture of intimidation have become the norm. With the Labour and Conservative parties hurling blame and allegations of racism and wrongdoing at each other, and anger and exhaustion over the still unresolved issue of Brexit, the country is divided like never before.

Where once candidates might have tried to be as visible as possible, many are now proceeding with caution, heeding warnings from the police. The abuse is not directed entirely at women. Men have come in for their share as well.

But a study conducted during the most recent election showed that female lawmakers received disproportionately more abuse on social media, with women of color receiving an even larger share.

And when more than a dozen female lawmakers cited threats and online abuse last month as part of their rationale for not running in the upcoming election, a discomforting spotlight was again thrust on the treatment of women in British politics.

In a system where women are already underrepresented, making up just 32 percent of Parliament, some feared the abuse would drive away potential new candidates.

Despite the charged atmosphere heading into the campaign, a record number of women — 1,124 of 3,322 registered candidates — are running in the election, the BBC reported. But many say they are having to adjust to a new reality where threats and intimidation are the norm.

“I think that we are a little bit more reticent in advertising where we are going to be,” Ms. Reeves said, so she instead shares photos of campaign appearances after the fact. It is a precaution the police have suggested since the murder of her close friend Jo Cox, she said.

In Leeds, the 2016 murder of Ms. Cox, a Labour lawmaker who represented the nearby area of Batley and Spen, is never far from people’s minds.

Ms. Cox was shot by a man shouting “Britain first” and “death to traitors” while she campaigned for Britain to remain in the European Union ahead of the Brexit referendum.

“We really needed to learn the lessons from that, and yet here we are, three and a half years later, and I think the environment is much more toxic,” Ms. Reeves said.

She believes Brexit divisions and language used by leaders in Parliament have fueled the anger.

“The language of betrayal, of traitor, of treachery, of surrender,” she said, repeating words that she and many of her female Labour colleagues have criticized Prime Minister Boris Johnson for using against his opponents in the past. But, she said, the misogyny is not limited to one side of the political spectrum.

A man was jailed last month for sending a threatening letter to Anna Soubry, a onetime Conservative who now heads an upstart party, Change UK. Two Labour activists were injured in separate attacks last week while canvassing door to door.

Six people have been convicted recently of criminal offenses for abuse and threats directed at Luciana Berger, a former Labour lawmaker and now Liberal Democrat candidate. Both the far right and far left went after her for her Jewish religion or her stance on Brexit.

Andrea Jenkyns, a Conservative lawmaker who is running to retain her seat in the constituency of Morley and Outwood, five miles south of Ms. Reeves’s area in Leeds, detailed a barrage of abuse after she won her district in the 2015 election, ending an 85-year reign by Labour.

Ms. Jenkyns — ardently pro-Brexit and an outspoken supporter of Mr. Johnson’s withdrawal deal — has received emails at her office threatening sexual violence, and detractors on social media have called her a bad mother.

Six weeks ago, her staff arrived at their office on Morley’s main street to find graffiti scrawled in the entryway: “Andrea just kill yourself pls.”

Many of her campaign signs, which depict a smiling Ms. Jenkyns standing alongside Mr. Johnson, have been defaced. In one, a hole was punched through her face.

Ms. Jenkyns believes the current climate is a departure from the “grown-up politics” of her first two campaigns, and she blames the heightened tensions on Jeremy Corbyn, the Labour leader, for driving that party further to the left. But, she conceded, Brexit has also played a role.

“The sad thing is, you deal with it on a daily basis so you are probably not shocked anymore and you accept it,” Ms. Jenkyns said. “And what kind of society is that?”

For the first time, Britain’s National Police Chiefs’ Council, which coordinates law enforcement across the country, and the Electoral Commission have issued a nationwide set of safety guidelines for candidates and activists. It advises canvassing in groups and encourages candidates and their supporters to report threats, including those made online.

The decision to hold an election in December, when daylight is in short supply across Britain, has also forced many candidates to rethink their strategies, with some, including Ms. Jenkyns, swearing off knocking on doors in the dark because of safety concerns.

Before previous elections, much of Ms. Reeves’s canvassing would take place after the workday ended. Now, it’s dark by 4:30 p.m.

On Tuesday, she set out at 4 p.m., knocking on doors with a small team of volunteers who put leaflets through mail slots in the Fairfield Estate, a mixture of public housing projects and privately owned homes spread out over a steep hillside.

The streetlights came on as she made her way along the densely packed terraced houses, her red Labour candidate badge visible in the darkness. Few answered the door.

But those who happened to be home were mostly positive, mixed with a few curt responses from those not supporting Labour.

“I think we are certainly a little more vigilant,” Ms. Reeves said, describing a few confrontations. “We would never have someone go door-knocking by themselves.”

Ms. Cox’s younger sister, Kim Leadbetter, believes that the conversation around Brexit has grown increasingly vitriolic in the years since her sister’s death. She worries it could prove damaging to the democratic process and discourage young people, particularly women, from politics.

“When Jo was murdered, there was a short period of time when politicians said all the right things about how politics needed to take a step back,” she said.

But it didn’t last. Instead, she said, anger, frustration, and violent language seem to dominate the conversation. Ms. Leadbetter, an ambassador for the Jo Cox Foundation, a nonpartisan, community-building charity that was created after her sister’s death, said that while her sister was an advocate of robust debate, “we have to be able to disagree agreeably.”

While there is undoubtedly an issue with threats of violence on social media — due in part to the anonymity the platforms can provide — Ms. Leadbetter warned against dismissing them as just an online problem.

“It only takes one individual who cannot see the difference between violent, aggressive and abusive language and an act of violence that can change people’s lives forever,” she said.