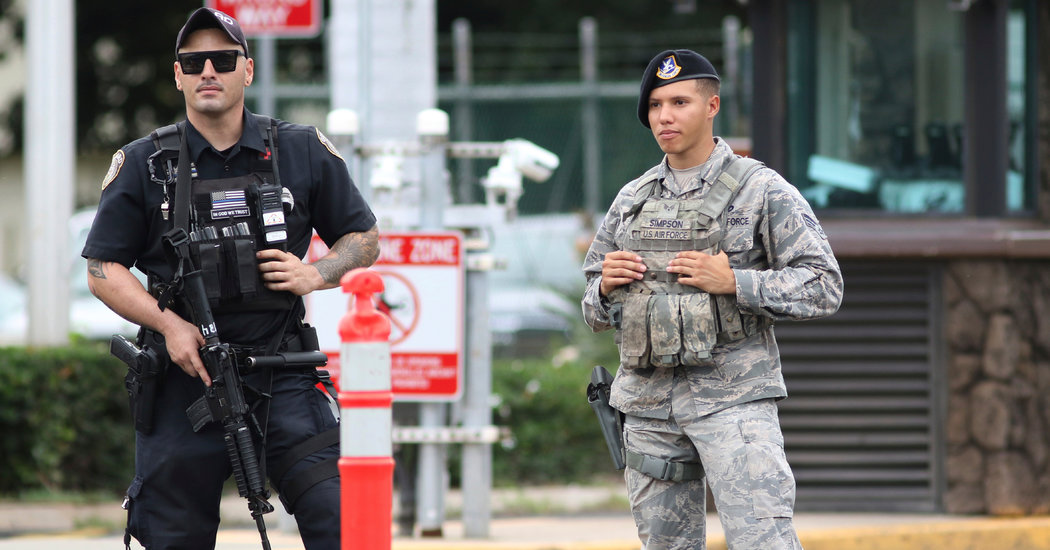 HONOLULU — A United States sailor opened fire at the Pearl Harbor Naval Shipyard on Wednesday, fatally shooting two shipyard workers and injuring another before killing himself, the authorities said.

The motive for the shooting, which occurred around 2:30 p.m. local time at a dry dock on Joint Base Pearl Harbor-Hickam, was not immediately clear. It was also not clear whether the active duty sailor targeted the three shipyard workers — Department of Defense civilians — or fired indiscriminately.

The sailor was assigned to the U.S.S. Columbia, a submarine docked at the shipyard for maintenance, Rear Adm. Robert B. Chadwick II, commander for the Navy in Hawaii, said at a news conference on Wednesday.

The names of the gunman and the victims will not be released until next of kin are notified, he said.

The base, on the southern shore of Oahu, was immediately placed on lockdown after reports of the shooting surfaced, frightening tourists at the nearby Pearl Harbor National Memorial three days before the 78th anniversary of the Japanese attack.

Nathaniel Penn, 37, a civilian contractor who specializes in mechanical installation and works on the base, was taking a break from work when he heard noises that sounded like “pow pow.”

“I thought it was a machine,” he said, noting that there is typically a lot of noise in the shipyard.

Then a siren went off with an announcement saying “this is not a drill. Active shooter on base.”

He ducked into a nearby building.

“We just sat in there for an hour and a half to two hours waiting,” he said.

He added, “my son had called me to check if I was O.K. because it had popped up on his Facebook. I told him I’m ok.”

The lockdown was lifted around 4 p.m.

President Franklin D. Roosevelt called the Japanese sneak attack on the United States Naval Base at Pearl Harbor on Dec. 7, 1941, a “date which will live in infamy.”

The raid killed more than 2,300 Americans and devastated the Navy’s Pacific fleet. All but one of its Pacific battleships were in port that day, including the Arizona, which sank.

The wreckage is now a memorial park. Congress declared war on Japan the day after the attack. On Dec. 11, 1941, the United States went to war with Germany and Italy, Japan’s allies.

The shipyard where the shooting was reported to have taken place is about a mile from the U.S.S. Arizona Memorial.

“We share in the sorrow of today’s tragic shooting at the Pearl Harbor Naval Shipyard,” Mayor Kirk Caldwell of Honolulu said in a statement. “The Medical Examiner’s Office is assisting the military with its investigation, and if additional city resources are needed, we stand ready to provide additional help.”

The base hosts both the Air Force and Navy.

Outside the Pearl Harbor National Monument, tourists were stunned by the news that there was a gunman on the base.

Ruth Kenneway, 52, said she heard an announcement directing people to “shelter in place.”

Ms. Kenneway, who was visiting the area from Fremont, N.H., said her friend was a civilian contractor at the shipyard.

“It’s frustrating because Pearl Harbor day is coming up and I worry about it,” Ms. Kenneway said. “There were 40 to 50 Marines, young fellows, setting up for the ceremonies for Pearl Harbor day.”

Brenda Sudol, 61, said that “everyone was looking at each other because they didn’t know what to do.”

“We knew we were in lockdown,” she said. “I was going to go behind the bushes or on the ground or in the building,” Ms. Sudol said.