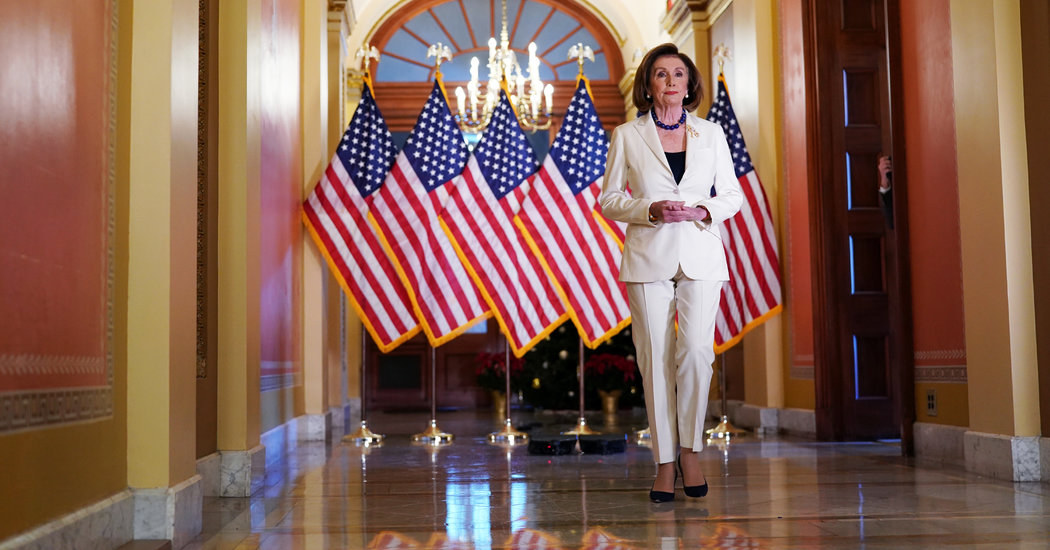 WASHINGTON — Speaker Nancy Pelosi announced on Thursday that the House of Representatives would begin drafting impeachment articles against President Trump, pushing ahead with a rapid timetable that could set the stage for a vote before Christmas to charge him with high crimes and misdemeanors.

Wrapping her announcement in the words of the Constitution and the nation’s founders, Ms. Pelosi said it had become clear over the course of two months of investigation that Mr. Trump had violated his oath of office by pressing a foreign power for help in the 2020 election. Allowing Mr. Trump to continue in office without remedy, she said, would come at “the peril of our republic.”

“His wrongdoing strikes at the very heart of our Constitution,” Ms. Pelosi said in a formal address lasting less than six minutes, delivered against a backdrop of American flags from the balcony outside her office in the Capitol. “Our democracy is what is at stake. The president leaves us no choice but to act because he is trying to corrupt, once again, the election for his own benefit.”

The decision follows a two-monthlong investigation by Democrats on the House Intelligence Committee that concluded that Mr. Trump abused his power by pressuring President Volodymyr Zelensky of Ukraine to announce investigations into former Vice President Joseph R. Biden Jr. and other Democrats, while withholding a White House meeting and $391 million in vital military assistance.

“The facts are uncontested,” Ms. Pelosi said. “The president abused his power for his own personal political benefit, at the expense of our national security.”

She added: “Sadly, but with confidence and humility, with allegiance to our Founders and a heart full of love for America, today I am asking our chairmen to proceed with articles of impeachment,” Ms. Pelosi said.

Returning to the ceremonial speaker’s hallway where she first announced that Democrats were launching the inquiry in late September, Ms. Pelosi sent a clear signal that she was confident they will have the votes they need to impeach Mr. Trump. The proceedings will play out amid profound partisan divisions, with Democrats pressing forward amid intense Republican opposition.

Before her announcement, Mr. Trump seemed to welcome the coming fight, calling Democrats “crazy” in a pair of tweets that urged them to get the process over with quickly so he could defend himself in the Republican-controlled Senate.

“If you are going to impeach me, do it now, fast, so we can have a fair trial in the Senate, and so that our Country can get back to business,” he wrote.

Ms. Pelosi limited knowledge of her announcement to only a tight circle of advisers, but there have been clear signs this week that Democrats were preparing to move forward with impeachment articles. On Wednesday, after the legal scholars told the Judiciary Committee the facts of the case met the standards for impeachment, the committee’s chairman, Representative Jerrold Nadler of New York, said explicitly that the conduct fit his three-part test for impeachment and indicated his panel would move forward with that in mind.

First, the Judiciary Committee is expected to announce a hearing in the coming days for Intelligence Committee lawyers for present their findings. But people familiar with the matter believe the committee is on track to begin publicly debating and voting in articles by the end of next week.

On Wednesday, Mr. Nadler’s team made clear it was considering building charges going beyond the Ukraine matter, related to obstruction of the House’s inquiry. A lawyer for the chairman, Norm Eisen, also asked the witnesses to also evaluate whether possible obstruction of justice by Mr. Trump laid out by Robert S. Mueller, the special counsel who investigated the Trump campaign’s connections to Russia’s interference in the 2016 election, was also impeachable. The Democratic caucus, and Ms. Pelosi, though, may still ultimately decide to keep the case more narrowly focused on Ukraine.

The Intelligence Committee report released on Tuesday laid out a broad framework for what articles of impeachment might look like. It found that the president had abused his power, endangered national security for his own personal benefit by seeking foreign interference in the 2020 election, and had obstructed justice by ordering critical witnesses not to testify.