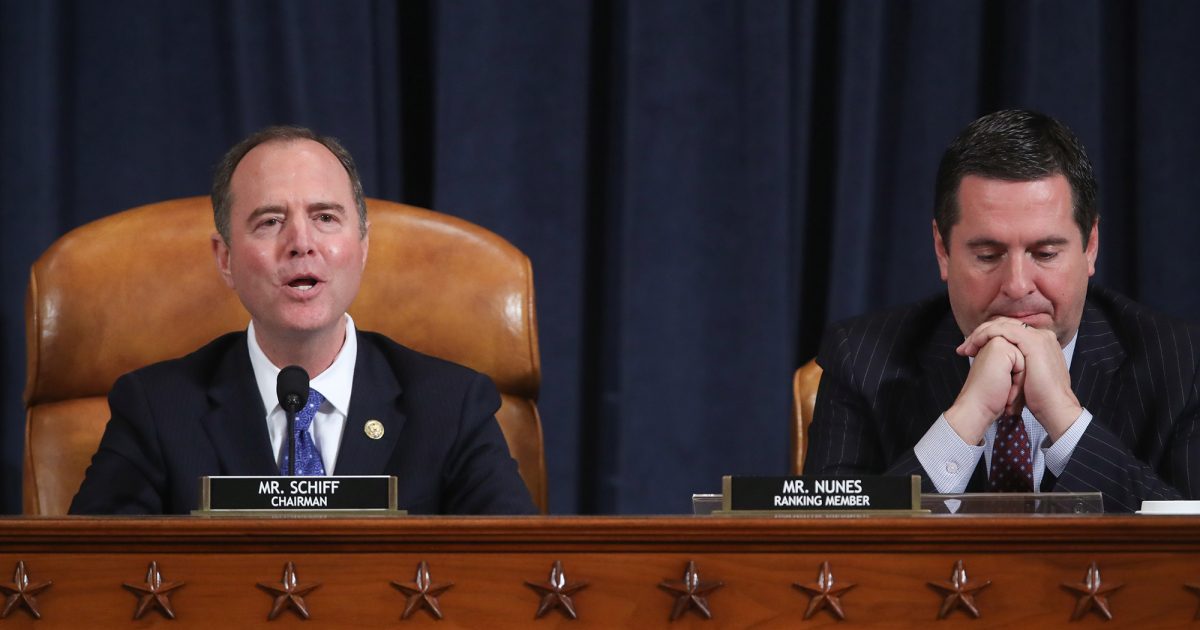 “Today, I am asking our chairmen to proceed with articles of impeachment.” House Speaker Nancy Pelosi announced this morning that she’s asking the House Judiciary Committee to start drafting up impeachment articles. Watch here.

Nunes, a Republican, is ranking minority member on the House Intelligence Committee, which is presiding over the impeachment inquiry into President Donald Trump. Schiff chairs the committee.

“I think that’s alarming that one member of Congress could be looking at the phone records of another member of Congress,” Paul told the station. “Sounds to me as if it would be illegal, and I think it needs to be investigated.” He continued:

If we’re going to live in a world where one party can subpoena the phone records or look at the phone records of another party, that’s a very worrisome world….I’m very, very concerned about the abuse of power coming from Adam Schiff.

Coming from a civil libertarian like Paul, such accusations carry more weight than when coming from other Trump sycophants. But Paul’s version of events here leaves out a key detail: Schiff never set out to obtain records of Nunes’ phone activity.

Some of Nunes’ phone calls were unearthed as part of the impeachment inquiry, because Nunes was on the phone with a lot of folks suspected of doing weird shit involving Ukraine and the Bidens. Here’s the relevant part of the Trump-Ukraine Impeachment Inquiry Report:

Solomon authored several op-eds suggesting that when Joe Biden was vice president, he tried to get Ukrainian prosecutor Viktor Shokin fired in order to protect his son, Hunter Biden.

Over the course of the four days following the April 7 article, phone records show contacts between Mr. Giuliani, Mr. Parnas, Representative Devin Nunes, and Mr. Solomon. Specifically, Mr. Giuliani and Mr. Parnas were in contact with one another, as well as with Mr. Solomon. Phone records also show contacts on April 10 between Mr. Giuliani and Rep. Nunes, consisting of three short calls in rapid succession, followed by a text message, and ending with a nearly three minute call. Later that same day, Mr. Parnas and Mr. Solomon had a four minute, 39 second call.

No one went specifically looking for Nunes’ phone records, and certainly not in the willy-nilly witch-hunt manner that Paul implies. But there he is, on the calls with the folks at the center of impeachment inquiry conduct.

Moreover, the phone records were requested and reviewed by the bipartisan House Intelligence Committee, not some rogue gang of surveillance-happy Democrats. And they were obtained (likely via subpoena) directly from AT&T, not via some secret federal fishing expedition blessed by the FISA court.

I know we’re all used to it by now but it’s still pretty crazy there’s no political penalty to be paid for just pretending the facts are completely different from what they are anymore. https://t.co/rhVsNbBofT

In Paul’s interview with WHAS, he also claimed that Adam Schiff had spied on Solomon’s phone records, using this to launch into some somber rhetoric about how “abhorrent” it is to live in a world “where Congress can look at a journalist’s phone records.”

The Republican minority of the three committees has had access to these subpoenaed records, and knows full well that neither Mr. Nunes nor Mr. Solomon were subpoenaed, nor were their call record.

This week Nunes filed a lawsuit against CNN for reporting on Lev Parnas’ claim that Nunes went to Vienna to discuss the Bidens with Shokin, the prosecutor that Trump associates say Joe Biden tried to get fired.