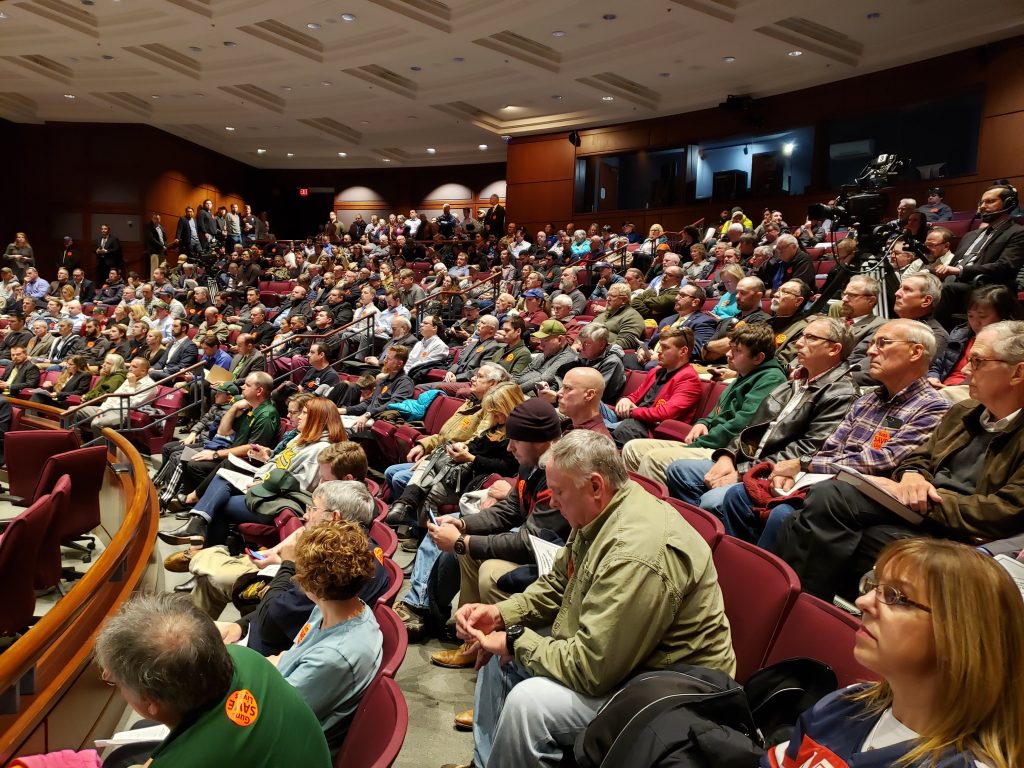 An overflow crowd of gun-rights supporters turned out on Tuesday evening to the Democratic-controlled Fairfax County Board of Supervisors meeting to push the locality to declare it would not help enforce unconstitutional gun laws.

The crowd exceeded the auditorium’s 350-person seating capacity, and a few dozen people wearing “Guns Save Lives” stickers were left lining the walls. The vast majority came to support residents who requested that the northern Virginia county become a Second Amendment sanctuary, meaning it will refuse to enforce gun laws they consider unconstitutional. After sitting quietly through two hours of discussion about baseball-field lighting, the crowd erupted at the end of each pro-gun speech during the public-comment period.

“I’ve been reading some of the proposed legislation and I’m very, very concerned about what they’re trying to pass,” Veronica Slootsky, a health care worker and firearms trainer who spoke at the meeting, told the Washington Free Beacon. “I think it’s unconstitutional and endangers folks in Virginia.”

The show of opposition to new gun-control proposals filed by Virginia Democrats, particularly in deep-blue Fairfax County, may cause some of the newly elected Democratic members of the Virginia General Assembly to proceed with caution before backing any bill. Democrats captured full control of the state legislature in the most recent election but enjoy only a one-vote majority in the Senate and a five-vote majority in the House of Delegates. If public demonstrations like Tuesday’s are able to persuade even two Democratic senators to oppose proposed measures, that would mean the demise of the most radical components of Gov. Ralph Northam’s (D.) gun-control plans.

Nobody spoke in opposition to the sanctuary status during the meeting, but the board did not consider a sanctuary resolution and did not comment on the statements made during the public-comment period. Forty-one other counties and cities throughout Virginia have declared themselves “Second Amendment sanctuaries” since November’s election.

The Virginia Citizens Defense League, which handed out the “Guns Save Lives” stickers at the meeting, has organized much of the sanctuary movement. VCDL president Philip Van Cleave told the Free Beacon the plan is to continue the push across the 95 Virginia counties in the coming weeks. He said the movement is “sending a huge message to the General Assembly that a lot of the state does not want more gun control.”

A number of the sanctuary supporters at the Fairfax meeting who spoke with the Free Beacon said they were concerned new laws would make them felons overnight. The gun-rights supporters named Senate Bill 16 and Senate Bill 64 as two that they most opposed.

S.B. 16 would make it a felony to possess “assault firearms,” the definition of which likely covers many guns currently owned by Virginians, even if they are owned legally.

“I read the proposed Senate Bill 16 and I was flabbergasted that I could all of a sudden become a felon by merely owning firearms in my own home,” Cody Claxton, a veteran and county resident, told the Free Beacon. “Then I realized it wasn’t just that, it was pistols that could handle more than 10 rounds. Then I realized just how ominous this proposal was. This was really confiscation.”

“Senate Bill 16 doesn’t allow for a grandfather provision, so we’ll wake up the next day as felons,” Quang Bui, a lifelong-Fairfax County resident and competitive shooter, told the Free Beacon. “That’ll also affect first responders who own their personal weapons that fall under S.B. 16. My concern is a lot of first responders might choose to leave their duty weapons at the station and choose to carry a smaller off-duty weapon. How are they able to protect themselves if they’re followed home? There have been stories where officers have been attacked off-duty or followed home.”

Mia Farinelli, a 16-year-old competitive shooter who has garnered national attention for her shooting skills, said she is concerned S.B. 16 will outlaw the firearms she uses for her sport and ruin her dream of competing for the Army’s shooting team.

“I think it’s important to keep our rights, and my competitive shooting, safe from infringement,” she told the Free Beacon.

S.B. 64 would amend a state law that prohibits certain “paramilitary activity,” outlawing “drilling, parading, or marching with any firearm” with the “intent of intimidating any person or group of persons.” Unlike the other provisions in the current law, S.B. 64 is based on the intent to intimidate rather than taking an action “in furtherance of … a civil disorder.” The current law does provide protections for those engaging in general firearms training and recreational shooting, but S.B. 64’s provision on intent to intimidate might be interpreted differently should it become law.

Slootsky, who said she lost family members in the Holocaust and moved to Virginia after her life was threatened while working in Washington, D.C., said she was concerned S.B. 64 could affect her efforts to train fellow Jews in self-defense.

“There have been a number of synagogue attacks in recent times, and one of the things that my group does is we help Jewish people train each other and work together to provide self-defense so these things don’t happen again,” she told the Free Beacon. “Unfortunately, this would prohibit groups like ours because we could be labeled as felons in case someone feels somehow intimidated by what we’re doing. Who knows? Maybe some neo-Nazi might say ‘oh, they’re intimidating us by training in firearms use’ and, according to the law, who knows?”

Slootsky said her family faced oppression in the Soviet Union after the Holocaust ended, with several family members being imprisoned and tortured before they were able to emigrate to the United States. She said her family’s history motivates her not just to learn how to use firearms, but also to advocate for gun rights.