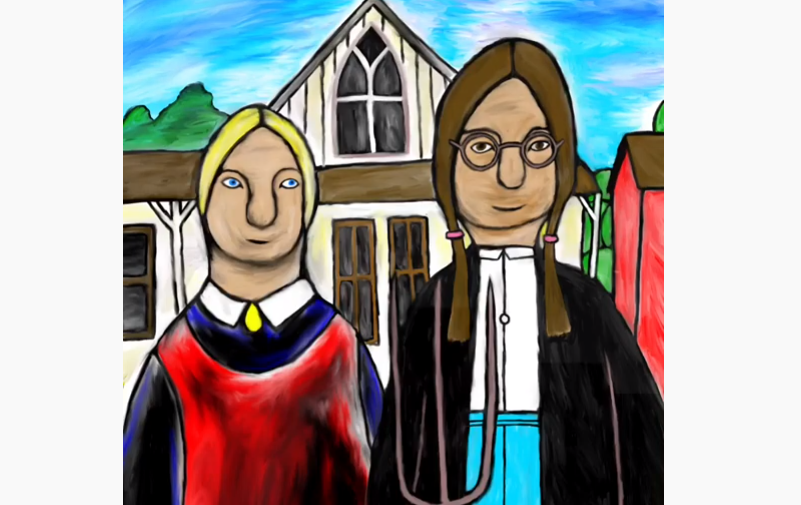 The gay mafia’s campaign to rid the world of biological imperatives is not just invested in changing the future but also about re-writing the past. The New York Times Style Magazine unveiled it’s weekend cover on Wednesday, which depicts queer artists who specialize in updating art of the past with today’s unhinged sexualities.

Imagine “American Gothic” but instead of the traditional heterosexual couple, you’ve got two lesbians of color standing in from of their farmhouse (painted Planned Parenthood pink) and surrounded by their cats (which they cutely refer to as the “kids.”)

Author Jesse Green painted the macabre picture for us with his piece titled “How Today’s Queer Artists Are Revising History.” In it he waxes on about the latest remarkable feat of LGBTQ imagination, where queer artists such as Debbie Grossmen re-imagine photos or paintings of different historical settings, like traditional rural American towns in the 1940s, and replaces the cisgenders (people who identify as their biological gender) with gay, bi, or trans characters.

Green waxed, “I, too, am frozen in time when I look at Grossman’s photographs … they suggest not an invented false history, but a real secret one, as if the queerness had always been there.” He was referencing a series of old photos taken in 1940 called “Pie Town” that were photoshopped by the queer artist to create “wives where husbands had been by removing Adam’s apples, lantern jaws and five-o’clock shadows.” Yeah, really creepy.

Grossman’s uncanny gender-bending altered photos are called “My Pie Town,” and constitute her attempt “to make the history I wish was real.” It gets even weirder when Green suggests that wiping away this historical patriarchy is a “repair” and also an act of queer “vengeance.” He wrote, “For if ‘My Pie Town’ is an act of repair, it also, at times, verges on vengeance, as each man is forcibly, digitally resexed. (In one case, a husband is erased entirely.)”

He also mentioned that the women are “resexed in a way: That is, they are given their sex back.” Oh, let me guess, because they’ve been liberated from the patriarchy? “As lesbians, they somehow look so much happier,” he claimed, adding, “like they’re getting some on the regular.”

Geez, talk about hatred for men. Has NYT become a lesbians-only publication or something? The rhetoric is ridiculous.

Still, the heterophobic Green felt the need to explain the context behind this new aggressively gay art, as if the phenomena is somehow more symbolic or important than it being a few angry lesbians or bi-sexuals going psycho in their hatred of men.

As opposed to queer art in the past, which came out in the “1960s and 1970s” and was concerned “with its own moment, as if to say, ‘Here I am;'” art like “My Pie Town” is created to “repair” a historical “pothole:” i.e. the lack of queer representation in the past. Green observed, “It’s no accident that the past-mining operation that has always existed as a subgenre of queer art is intensifying now, just as the history of other disenfranchised groups is finding wider audiences.”

Translation: as the world gets woker, we’re going to start seeing Orwellian revisionist propaganda pop up to reinforce the contemporary status quo. Who knows, maybe in 30 years, the Lourve will tell us that Da Vinci originally intended the “Mona Lisa” as genderqueer. Heavens, where’s that giant meteor when you need it?