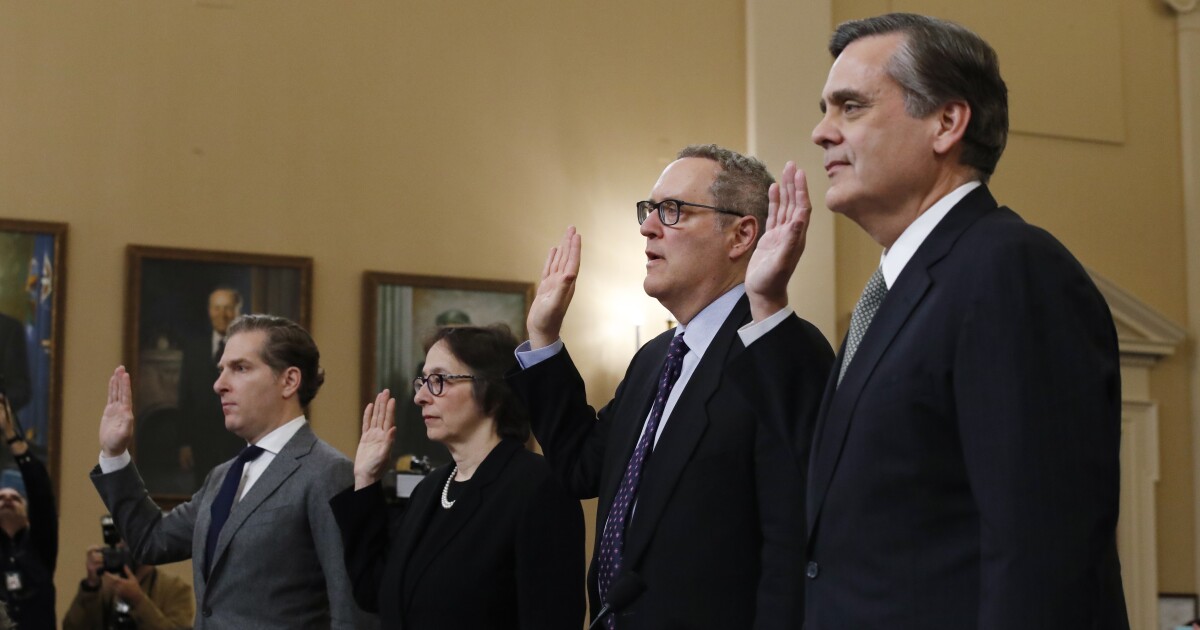 But beyond offering a constitutional law class and partisan bickering, the committee took a major step toward defining how it could craft articles of impeachment against Trump. They could encompass not only the president’s alleged abuse of power in the Ukraine scandal but also obstruction of justice stemming from the Russia investigation.

— During the hearing, Stanford law professor Pamela Karlan mentioned Trump’s son, Barron, prompting a barrage of backlash from Melania Trump and Republicans — and an apology from Karlan.

— Meanwhile, in Ukraine, Trump’s personal lawyer, Rudolph W. Giuliani, met with former government officials in what he said was an effort to undermine the impeachment inquiry and continue his crusade to dig up dirt on those same Democratic rivals, according to the New York Times.

— Trump, who long has claimed his leadership has brought unprecedented respect to the United States, returned from a NATO summit after being laughed at by some of America’s closest allies.

— A new poll for The Times has found the Democratic presidential contest in California remains extremely fluid. But not enough, at least so far, to provide an opening for Michael Bloomberg, who entered the race two weeks ago and was banking on winning big in the delegate-rich state.

Atmospheric river storms like the one pounding California this week are becoming more intense and cost Western states roughly $1 billion in damage annually, according to a new study. The culprit: climate change. And that’s not the only water-related peril resulting from global warming. This week, California lawmakers are discussing sea level rise and what the state needs to do to better prepare coastal communities facing the prospect of devastating loss.

Robert Marbut, a Texas-based consultant sought by communities looking for ways to address homelessness, has long encouraged elected officials to stop coddling people on the streets — in part by blocking charities from handing out food. Now, he’s been tapped to lead the agency that coordinates the federal government’s response to homelessness.

Meanwhile, hundreds of thousands of Americans who rely on the federal food stamp program will lose their benefits under a new Trump administration rule that will tighten work requirements for recipients.

Hanged for Murder — or Being Mexican?

In the summer of 1851, California celebrated the Fourth of July — the first since becoming a state. The streets of Downieville, about 100 miles northwest of Sacramento, were filled with parades, bands and heavy drinking. Then, a man died. By the next day, a young Mexican woman named Josefa had been arrested, tried, convicted of murder and hanged. Today, her legend lives on in this small town.

On this date in 1933, Utah ratified the 21st Amendment to repeal the 18th — thus marking the official end of Prohibition, fulfilling a promise President Franklin D. Roosevelt had made on the campaign trail.

The Times reported at the time: “Voicing a determination that the day of the bootlegger is done, the President said he trusted ‘to the good sense of the American people that they will not bring upon themselves the curse of excessive use of intoxicating liquors, to the detriment of health, morals and social integrity.’” It went on to note: “Mr. Roosevelt had been swimming in the White House pool prior to the signing of the proclamation, and there were reports which White House attaches refused to discuss that the President had signed the document while in his swimming suit.”

— California’s economic growth will slow next year, but it will still probably outperform the U.S. overall, as employers boost payrolls, a new UCLA forecast finds.

— The Los Angeles City Council has unanimously approved a law to curb campaign contributions from real estate developers, but critics warn it’s been too watered down.

— The feds have sued the L.A. Department of Water and Power, saying its equipment caused the 2017 Creek fire, which destroyed dozens of homes.

— The L.A. City Council agreed to pay up to $4 million to settle a lawsuit brought by a woman who plunged along with her car into a sinkhole in Studio City in 2017.

— For today’s confessional pop queens, Jack Antonoff is more than a producer. He’s a confidant.

— After 13 years apart, Viacom and CBS are about to reunite. They’ve got their work cut out for them.

— She’s British, but singer-songwriter Yola will challenge your idea of American roots music.

— An active duty U.S. sailor whose submarine was docked at Pearl Harbor opened fire on three civilian employees, killing two and then taking his own life just days before dignitaries and veterans descend on the base for the 78th anniversary of the Japanese attack.

— Romaine lettuce from the Salinas Valley that’s tainted with fecal bacteria has been linked to 102 illnesses in 23 states.

— Nearly eight years after he shot Trayvon Martin, George Zimmerman is suing the late teen’s family and lawyers for $100 million.

— Washington’s special envoy to Afghanistan made a surprise stop in Kabul Wednesday to push for peace talks between Afghans on both sides of the conflict.

— Federal prosecutors in Germany have taken over the investigation of a brazen daylight killing of a Georgian man on the streets of Berlin, saying evidence suggests it was ordered either by Moscow or the Chechen Republic. Germany expelled two Russian diplomats, saying they weren’t cooperating with the probe.

— The fall of the Berlin Wall once gave South Korea hope. Not anymore.

— He went from buffalo wings to cannabis and became the talk of L.A.’s pot business.

— PG&E is close to finalizing a $13.5 billion payout to victims of wildfires ignited by its power lines, a key step toward resolving its bankruptcy.

— San Diego-based craft beer pioneer Ballast Point is being sold again, this time to a tiny brewery across the country.

— OxyContin maker Purdue Pharma wants to give its CEO a $1.3 million bonus. State attorneys general have balked, but the company says the bonus is needed to keep it from falling apart, which would mean less money to address the opioid crisis it’s accused of helping create.

— USC is keeping Clay Helton as its football coach. Columnist Bill Plaschke has a question for new athletic director Mike Bohn: What are you thinking?

— Even though they’re still figuring how to ease Kawhi Leonard and Paul George into their lineup without losing their team identity, the Clippers are proving impressively deep and resourceful, columnist Helene Elliott writes.

— The Angels have reached a deal to stay in Anaheim through 2050. Now it’s up to them whether to upgrade or replace their stadium.

— We should be ashamed, but when it comes to Amazon, we just can’t help ourselves, columnist Steve Lopez writes.

— L.A. says it banned developer political contributions, but the job is only half-finished, The Times’ editorial board writes.

— Consulting giant McKinsey helped the Trump administration implement its immigration policy with proposals to speed up deportations and cut costs, including on food and medical care. Some Immigration and Customs Enforcement workers found the measures too harsh. (New York Times)

— Actress and filmmaker Lee Grant on her 70-year career, sexism and ageism in Hollywood and the things today that remind her of her blacklisted years. (Bright Wall Dark Room)

— Why defining “authenticity” in food isn’t as easy as it used to be. (Eater)

Every year, Los Angeles County holds a burial ceremony for its unclaimed dead. Yesterday, that meant people gathered in Boyle Heights to remember the 1,457 individuals who died and whose cremated remains have been in the county’s possession for the past three years. The interfaith ceremony included a Tongva song; a recitation of Psalm 23 in English and in Hebrew; the Lord’s Prayer in Spanish, English and Tagalog; and the chanting of Buddhist texts.