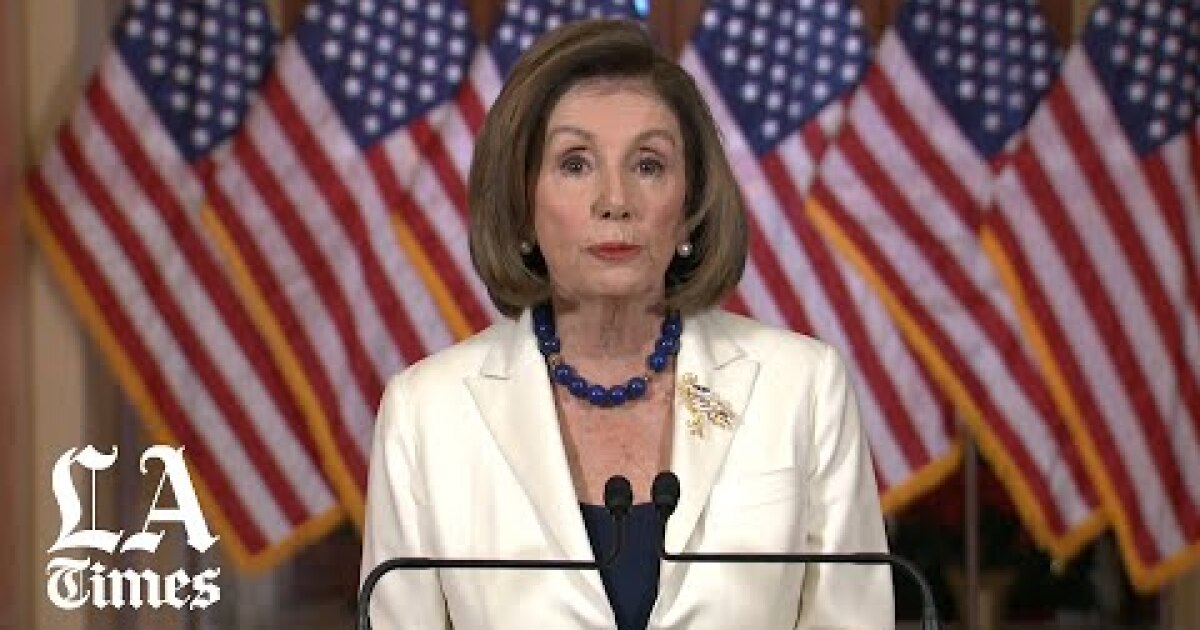 Speaker Nancy Pelosi announced Thursday that she is asking House committees to move to impeach President Trump, taking a major step toward making him just the third president in American history to face that sanction.

“The facts are uncontested,” Pelosi (D-San Francisco) said. “The president abused his power for his own personal political benefit.”

“His wrongdoing strikes at the very heart of our Constitution,” she added. “Our democracy is what is at stake. The president leaves us no choice but to act.”

Pelosi made her five-minute statement in the same long hallway outside her office where just two months ago she announced the impeachment inquiry into Trump’s attempt to pressure Ukraine into investigating his potential political rival Joe Biden and other Democrats.

In a news conference later, Pelosi would not discuss the potential contents of the articles of impeachment, saying that was a decision left to the chairmen of the relevant committees.

One major issue Democrats must still resolve is whether to include anything related to Robert S. Mueller III‘s investigation in the impeachment articles. Some Democrats have balked at that, wanting to keep the impeachment focused entirely on Ukraine, while others have said the House must respond to the president’s attempt to have Mueller removed from his role as special counsel leading the probe into Russia’s interference in the 2016 election.

House Majority Leader Rep. Steny Hoyer (D-Md.) seemed to indicate that some reference to Trump’s unsuccessful efforts to fire Mueller would be included. He told CNN before Pelosi spoke Thursday that the impeachment investigation “essentially started” with the appointment of Mueller.

“This is a process that has gone on for over two and a half years,” Hoyer said.

House Minority Leader Kevin McCarthy (R-Bakersfield) also held a news conference Thursday at which he repeated his party’s charge that Democrats had entered the impeachment process with their minds already made up.

“Today, with the speaker’s announcement, she has weakened this nation,” McCarthy said.

Democrats have always had a timeline to impeach Trump, he added. “They’ve always had it written, they’ve just never had a case or proof.”

On Monday, the House Judiciary Committee plans to take the next step in the process, holding a hearing at which the Democratic and Republican counsels for the Intelligence Committee are scheduled to present the findings from that committee’s two-month investigation of Trump’s conduct toward Ukraine.

The Intelligence Committee voted Tuesday to present its 300-page report to the Judiciary Committee. That committee is tasked with deciding whether to formally recommend articles of impeachment.

Republicans pushed for Intelligence Committee Chairman Adam B. Schiff (D-Burbank) to present the committee’s report personally — providing them a chance to grill a lawmaker they have heaped blame upon for the investigation — but Democrats rejected that demand.

In its first hearing on impeachment Wednesday, members of the Judiciary Committee focused on three areas that could form the basis of articles of impeachment:

The first was abuse of power and bribery stemming from Trump’s effort to pressure Ukraine. Witnesses in the Intelligence Committee investigation testified that Trump withheld badly needed security aid for Ukraine and a White House meeting sought by its president, Volodymyr Zelensky, to induce him to announce an investigation into Biden.

Democrats say Trump put his personal political gain ahead of national interest. His request during a July 25 telephone call that Zelensky “do us a favor” by announcing politically motivated investigations amounted to soliciting a bribe, they say.

The second potential impeachment count would involve obstruction of Congress by refusing to answer subpoenas and ordering witnesses not to testify in the impeachment inquiry. The third was obstruction of justice for attempts to influence the outcome of the Mueller probe.

At Wednesday’s Judiciary Committee hearing, three legal scholars testified that Trump’s actions provided grounds for impeachment. A fourth expert, chosen by Republicans, said the House was moving too quickly and had not proved its case.

Some lawmakers had questioned whether there is enough time left in the calendar year to finish the inquiry and vote on articles of impeachment before the House is scheduled to recess on Dec. 20. Pelosi gave no indication of when a vote on impeachment might occur, but hinted it will be soon.

“We feel comfortable with all of the time that has gone into this, two and a half years since the appointment of Mueller,” she said.

“If some people have some unease, we’ll catch them up,” she said.

Earlier Wednesday, at a closed-door caucus of Democratic lawmakers, Pelosi reportedly asked her colleagues, “Are you ready?”

The answer was a resounding yes.

Although Pelosi hasn’t specified a timeline, the most likely process would bring a final House vote around Dec. 20, meaning the Trump impeachment would almost precisely mirror the one the Republican-majority House followed in the impeachment of President Clinton. The House in that case voted on Dec. 19, 1998, to impeach.

Republicans have repeatedly denounced the Democratic-led proceedings as a “sham” and “a simple railroad job.”

Rep. Doug Collins (R-Ga.), the ranking Republican on the Judiciary panel, said Wednesday that Democrats were motivated by “a deep-seated hatred of a man who came to the White House and did what he said he was going to do.”

Asked by a reporter as she exited her news conference if she hates the president, Pelosi abruptly stopped and wagged her finger at him, saying that as a Catholic she doesn’t hate anyone.

Pelosi then stepped back to the microphone and said Trump is a coward for not doing more on gun control, but said such policy fights are for voters to weigh in the next election and have “nothing to do” with the impeachment.

Pelosi said she still prays for the president, who she said forced the House’s hand on impeachment through his actions, and reiterated that she doesn’t hate anyone.

“Don’t mess with me when it comes to words like that,” she said before leaving.

In two tweets early Thursday, Trump said House Democrats have no case and are demeaning the country, but also urged the House to move quickly.

“If you are going to impeach me, do it now, fast, so we can have a fair trial in the Senate, and so that our Country can get back to business,” he said, adding he wants to require Schiff and perhaps Pelosi herself to testify.

If the House does vote to impeach, the Senate would hold a trial, probably in January. Agreement of two-thirds of senators would be needed to remove Trump from office, and with Republicans holding a majority of the chamber, that appears highly unlikely.