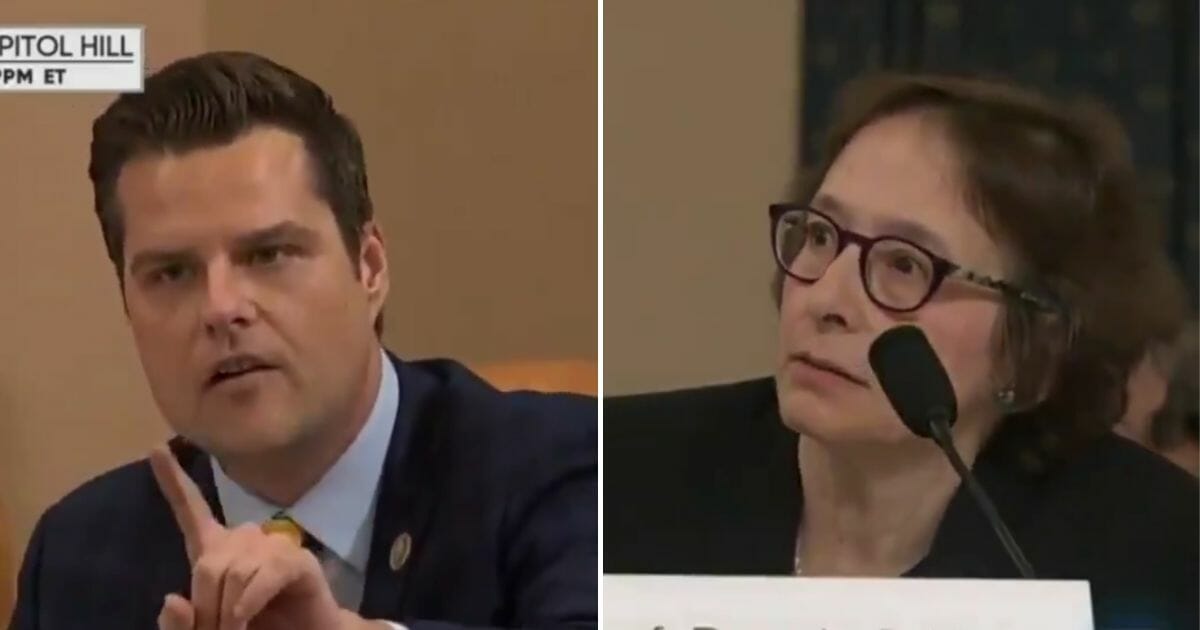 The House Democrats’ impeachment inquiry resumed Wednesday with a public hearing in the Judiciary Committee featuring four purported law professor “experts” on impeachment and the Constitution.

Three of those witnesses were quite obviously and overtly biased against President Donald Trump and in favor of impeachment, and one of them — Stanford law professor Pamela Karlan — even took an underhanded and unwarranted shot at the president during his testimony by referencing the name of his youngest son, Barron.

Republican Florida Rep. Matt Gaetz would have none of it, however, and ferociously called her out for “bullying” the young son of the president while also making note that none of the witnesses had any firsthand knowledge whatsoever of any sort of impeachable offense committed by President Trump.

The snide remark from Karlan about Barron Trump came while she was answering questions from Democrat Texas Rep. Sheila Jackson Lee and making an argument that President Trump viewed himself as being akin to an all-powerful monarch, as evidenced by his son’s name, a lame joke that prompted chuckles from Jackson Lee and some in the audience.

“I’ll just give you one example that shows the difference between him and a king, which is, the Constitution says there can be no titles of nobility,” Kaplan said of Trump. “So while the president can name his son Barron, he can’t make him a baron.”

Later, when Gaetz had the opportunity to ask questions, he took Kaplan to task for that unnecessary reference to the president’s son as a means to attack the president.

Referencing prior statements from Kaplan that were disparaging of conservatives and noting how such things from law professors in “ivory towers” like her strained their credibility with the American people, Gaetz was interrupted by Kaplan as she attempted to launch another attack on the president, but he wasn’t going to allow that to happen.

“Excuse me, you don’t get to interrupt me on this time,” Gaetz said. “Now let me also suggest that when you invoke the president’s son’s name here, when you try to make a little joke out of referencing Barron Trump, that does not lend credibility to your argument.”

“It makes you look mean. It makes it look like you’re attacking someone’s family, the minor child of the president of the United States,” he continued.

Then Gaetz displayed just how meaningless the testimony of the “witnesses” truly was, and said, “If you have personal knowledge of a single material fact in the Schiff report, please raise your hand.”

When not a single hand was raised, the congressman called for the official record to reflect as much.

.@RepMattGaetz: To all of the witnesses, if you have personal knowledge of a single material fact in the Schiff report, raise your hand.

Rep. Gaetz was absolutely right to call out Kaplan for her bully-like attack on the president’s son, using him as a vehicle to smear Trump.

It was also a smart play to call for the show of hands from all of the witnesses to help visualize the indisputable fact that none of them had any personal knowledge of any impeachable offense committed by the president.

The snarky remark by Kaplan also earned a rapid and justifiable response from the president’s re-election team with a statement by Trump 2020 national press secretary Kayleigh McEnany, who said, “Only in the minds of crazed liberals is it funny to drag a 13-year-old child into the impeachment nonsense.”

“Pamela Karlan thought she was being clever and going for laughs, but she instead reinforced for all Americans that Democrats have no boundaries when it comes to their hatred of everything related to President Trump,” McEnany continued. “Hunter Biden is supposedly off-limits according to liberals, but a 13-year-old boy is fair game. Disgusting.”

“Only in the minds of crazed liberals is it funny to drag a 13-year-old child into the impeachment nonsense.” – National Press Secretary @kayleighmcenany

Our full statement on Pamela Karlan below. pic.twitter.com/XI6eY2oSIH

McEnany raised a valid point that highlights the utter hypocrisy of the left, in that the fully-grown adult that is Hunter Biden is supposedly a “child” that no Republican should ever dare invoke the name of or bring up in discussion of his father, but all of President Trump’s children, particularly young Barron, are routinely referenced and made fun of and even viciously attacked by the left for purely partisan purposes.

It truly is “disgusting” and needs to stop, and thankfully both Rep. Gaetz and McEnany wasted no time in doing so with regard to Kaplan.