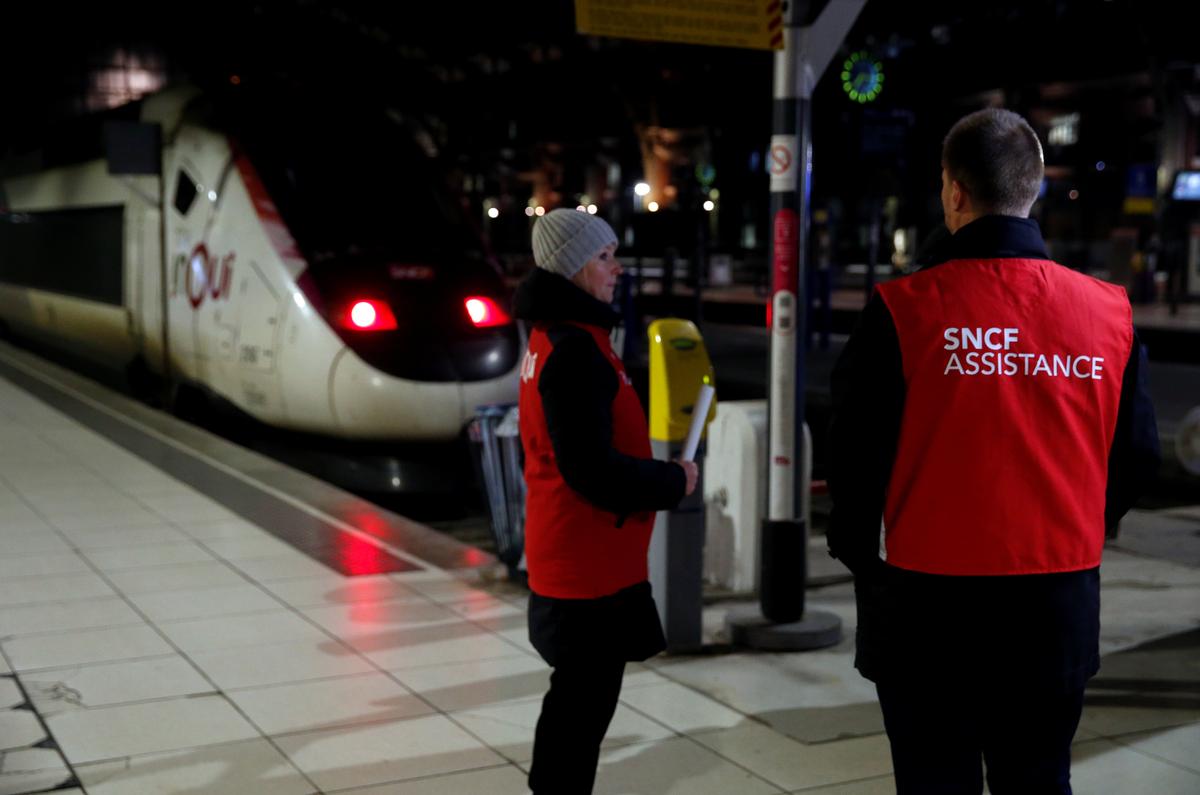 PARIS (Reuters) – Commuters scrambled to fix up old bicycles, reserve carpool rides and arrange emergency childcare ahead of one of France’s biggest public sector strikes in decades on Thursday.

French SNCF railway workers stand on a platform to provide assistance for passangers at Lille railway during a day of national strike and protests against French government’s pensions reform plans, in Lille, France, December 5, 2019. REUTERS/Pascal Rossignol

Unions are digging in for a nationwide strike over pension reform that they hope will cripple transport networks, close schools, leave garbage piled high to force President Emmanuel Macron into retreat.

The SNCF railway says only one in 10 commuter and high-speed TGV trains will run. Eurostar and Thalys have cancelled at least half their services linking Paris with London and Brussels and the government has asked airlines to cancel 20% of flights.

More than half of all primary and secondary teachers are expected to walk out and hospital emergency rooms nationwide will operate on thin staffing. Transport unions have set no end-date for the strike.

“What we’ve got to do is shut the economy down,” Christian Grolier, a senior official from the hard-left Force Ouvriere union, told Reuters. “People are spoiling for a fight.”

President Emmanuel Macron wants to simplify France’s Byzantine pension system, which comprises more than 40 different plans, many with different retirement ages and benefits. Macron says the system is unfair and too costly.

He wants a single, points-based system under which for each euro contributed, every pensioner has equal rights.

Twenty-four years later, the looming standoff is a risky venture for France’s hard-left unions who have seen membership and public support wane in recent years. They are battling to remain relevant against a president who has faced down waves of strikes over reforms of the labour market and SNCF railways.

For Macron, the showdown will set the tone for the second half of his mandate, with more difficult reforms including to unemployment benefits to come.

The battle for public opinion will be critical, with the unions churning out leaflets and blitzing social media.

Many commuters are turning to carpooling for the first time, though monster traffic jams expected to snarl up the roads.

The strikes follow months of sometimes violent “yellow vest protests” over the high cost of living and perceived elitism of political class.

Laurent Berger, head of the reform-minded CFDT union, said the social environment was more explosive than in 1995.