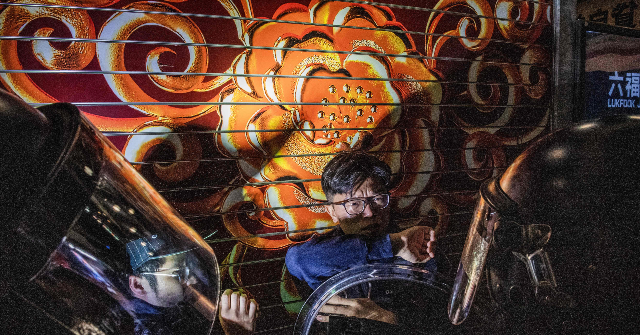 State propaganda outlet Global Times proudly reports on the success of a game entitled “Fight the Traitors Together,” where players are invited to “hunt down” eight real-life secessionists by “knock[ing] them down with slaps or rotten eggs until they are captured.”

According to the Times, the game allows players to “vent their anger at the separatist behavior of secessionists” during the recent anti-China demonstrations. “Hong Kong is part of China and this can’t be meddled with by outside powers,” reads the game cover page.

The eight “traitors” featured in the game are caricatures of real-life pro-democracy activists, including prominent opposition figures such as Jimmy Lai, the editor of the anti-communist Apple Daily newspaper and Demosisto leader Joshua Wong, who authorities have banned from running for office in the city.

Some of the other caricatures in the game include the depiction of protesters as a “crowd of black-clad rioters wearing yellow hats and face masks,” while another opposition figure, Anson Chan, “carries a bag with a US flag, clutches a stack of US dollars and holds a loudspeaker to incite violence in the streets.”

One player, Yang Qian, reportedly told the outlet that the “practices of these modern traitors have long been irritating,” and that while they remain free in real life, “at least in the game they should pay for what they have done.”

China’s approval of such violence is of little surprise given Beijing’s broader attitude towards the protests, which it prefers to refer to as riots caused by rogue political anarchists. The seriousness and longevity of the demonstrations have sparked concern that China may ultimately send in the People’s Liberation Army (PLA) to deal with the unrest, leading to fears that the movement may end with a repeat of the 1989 Tiananmen Square massacre.

Hong Kong has been afflicted by political and civil unrest since early June when pro-democracy demonstrators broke out across the city to oppose an extradition bill that would have permitted criminal suspects to be sent to China for trial.

The bill has since been shelved by Hong Kong’s Beijing-controlled CEO Carrie Lam, although the protests have since intensified into a wider movement against Chinese interference and the undermining of the principle of “one country, two systems” that was agreed on following the handover from the British Empire in 1997.