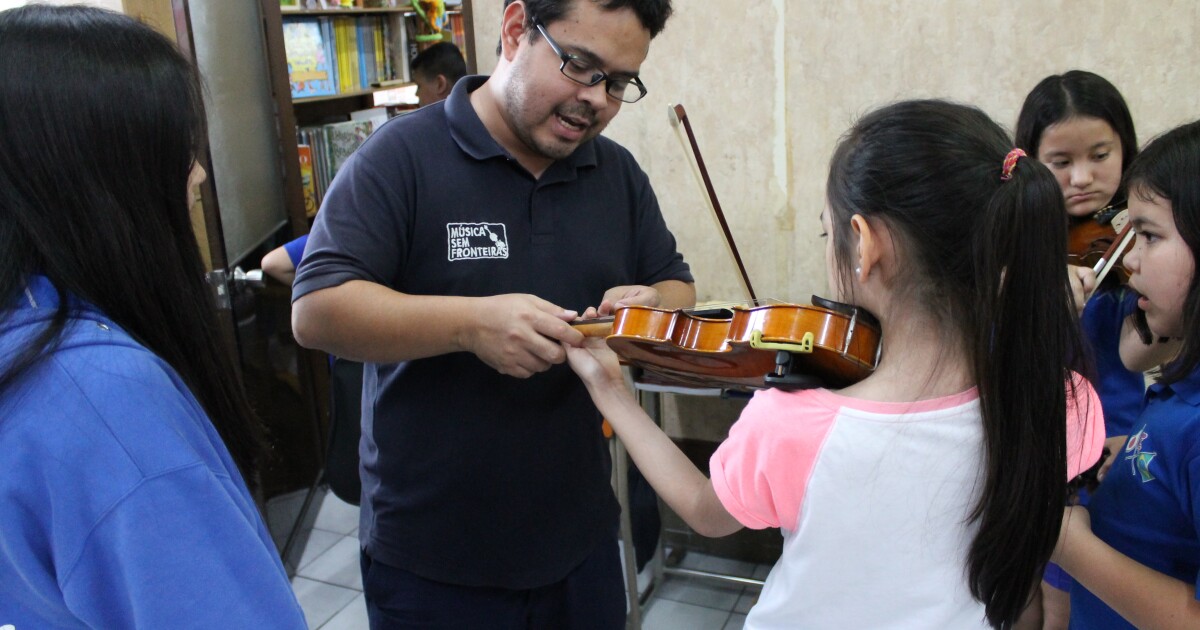 The three music teachers — armed with a violin, a guitar and a drum — are ready for class. But the elementary school students jump around the room, screaming and laughing.

The scene plays out at a school in Tokyo’s industrial hinterland, but all the chatter is in Portuguese. The students and teachers are Brazilian, and the music includes samba and bossa nova.

The class is part of a project called “Music Without Borders,” the brainchild of Rafael Kinoshita, a 35-year-old Brazilian who endured a difficult childhood here as an outsider and believes music can help spare his students from that kind of distress.

Japan has long considered itself the unique homeland of a single race: the Japanese. But when the economy faced an industrial labor shortage about 30 years ago, officials had no choice but to bring in foreign workers.

In 1990, the government started offering visas to descendants of Japanese immigrants to South America. Today, the more than 200,000 Brazilians living in Japan are part of a foreign community, including Koreans and Chinese, that makes up 2% of Japan’s population of 127 million. Immigration is set to increase under an expanded migrant worker program launched in April.

Kinoshita, whose paternal grandfather was Japanese, was 6 when his family arrived in 1991 and settled in Oizumi, a factory town 90 minutes from Tokyo. His parents worked in the factories, and he enrolled in Japanese public school.

“Even the teachers discriminated against us,” Kinoshita recalled. “If you made a mistake, the teacher would say right in the middle of the class, ‘Foreigners just don’t understand, do they?’”

Kinoshita learned Japanese within months of arriving, started karate when he was 8. But all he could think was: This is not really my country.

At 12, he discovered the violin when his family church, Megumi Baptist, started a musical group. He improved quickly and at 14 became the first Brazilian to join a local Japanese youth orchestra.

Still, like most Brazilians in Japan, he remained on the margins of society.

Immigrants are not granted Japanese citizenship even if born here, and children can face bullying in school. Brazilian schools have spread to relieve the pressure, but career opportunities remain limited for those without Japanese pedigree or native-level language skills.

Kinoshita quit school at 15 and went to work at Sanyo Electric’s sprawling plant in Oizumi. He kept playing violin at church on Sundays and took private lessons.

In time, he concluded that factory work in Japan was a dead end.

“All you have to do is be there, hammer some boxes, and you go home,” he said. “But what is it really? I’m selling my body by the hour, and I’m not imagining anything good for myself.”

In 2008, he decided to use his musical skills to show Brazilian children that life held better possibilities than making cars or air conditioners for a living. He started teaching violin in Oizumi, and things grew from there.

He now has 180 students, all from Brazilian immigrant enclaves scattered across three prefectures surrounding Tokyo.

On a Monday in July, Kinoshita is teaching at Escola Opcao, a cluster of single-story buildings wedged among rice fields along a potholed gravel road.

A green map of Brazil covers the wall of the dining room. In one classroom, a paint-splattered air conditioner blows through broken vents, and corkboard conceals a hole in the concrete wall.

The day starts with younger students, who work on rhythm and singing. Cristiano Petagna, the teacher with the guitar, leads the session. Kinoshita pitches in with violin.

After a mix of children’s tunes and traditional Brazilian songs, the morning crescendos to a rousing rendition of Queen’s “We Will Rock You,” with Freddie Mercury’s voice blaring from a Bluetooth speaker while the kids provide percussion by banging rhythm sticks on the tile floor.

Then the teachers split up. Petagna takes the guitar students. Kinoshita and a third teacher, Vitor Novak, a 20-year-old Brazilian born in Japan, take the violin students to another classroom.

Kinoshita often lightens his classes with slapstick. He grabs his head and staggers in mock surprise when students make mistakes. He dances around the classroom to the music, swinging his hips and rubbing his belly, making the children laugh.

He peppers lessons with snippets of encouragement: “Why are you playing? To get better!” and “It’s good to play music that’s difficult. Easy is boring, right?”

Today, he pumps up the confidence of his middle-school violinists for a public concert in September.

“You’re gonna be famous,” he tells them. “Japanese reporters will be taking photos, saying, ‘Oh, they’re so cute!’” The kids laugh.

The group warms up with the scales, moves to “Twinkle, Twinkle, Little Star,” then takes on the Brazilian standard “Asa Branca,” a favorite at Kinoshita’s concerts.

He hopes one day to attract Japanese students and create a bicultural orchestra to foster understanding between immigrants and their hosts.

“Discrimination is everywhere. Why? Because people don’t communicate. They don’t make contact,” he says. “I want to let these children dream, and forget this thinking that nothing but the factory can bring you money.”

But money is one of Kinoshita’s biggest problems.

His fees are modest — between $18 and $36 for a month of lessons — and the low wages he can pay assistants make it hard to retain help. In the fall, Novak quit for a better-paying construction job.

Kinoshita works nights doing clerical work and giving Breathalyzer tests to drivers at a 24-hour delivery company. The round-the-clock grind — and the fast food he eats on the go — has taken a toll on his health. The married father of a 2-year-old son is already on cholesterol drugs. By year’s end, he plans to quit his night job.

That means he’ll have to raise more money to keep the project alive. He’s planning a major push this month to win over skeptical sponsors and widen the scope of the program.

He said he’s thought about quitting. No one would blame him if he closed up shop and withdrew to a factory, where many in Japan think he belongs.

But that urge vanishes when he is teaching.

In the final session of the day at Escola Opcao, he and Petagna lead kindergartners in an original song featuring the sounds of different animals.

“Which animal has a sharp voice?” Petagna asks the kids, ages 4 to 6.

The children respond with a roar.

At the end of the session, Kinoshita leads dozens of children in a raucous conga line around the common room, waving a speaker over his head.

Coleman is a special correspondent.