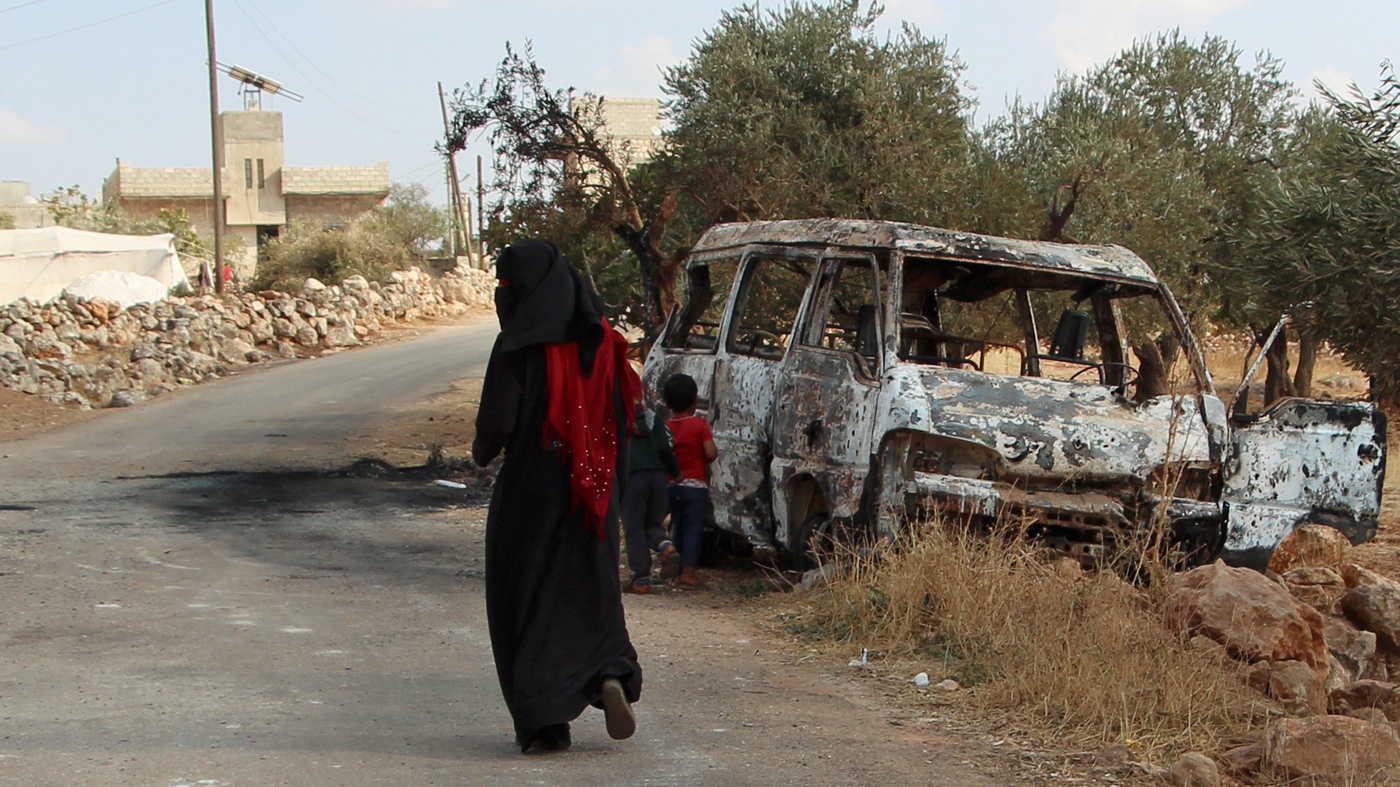 A woman walks past a wrecked van near the northwestern Syrian village of Barisha. Local residents and medical staff tell NPR that noncombatant civilians were killed and injured in the van the night of the U.S. raid on the compound of ISIS leader Abu Bakr al-Baghdadi. 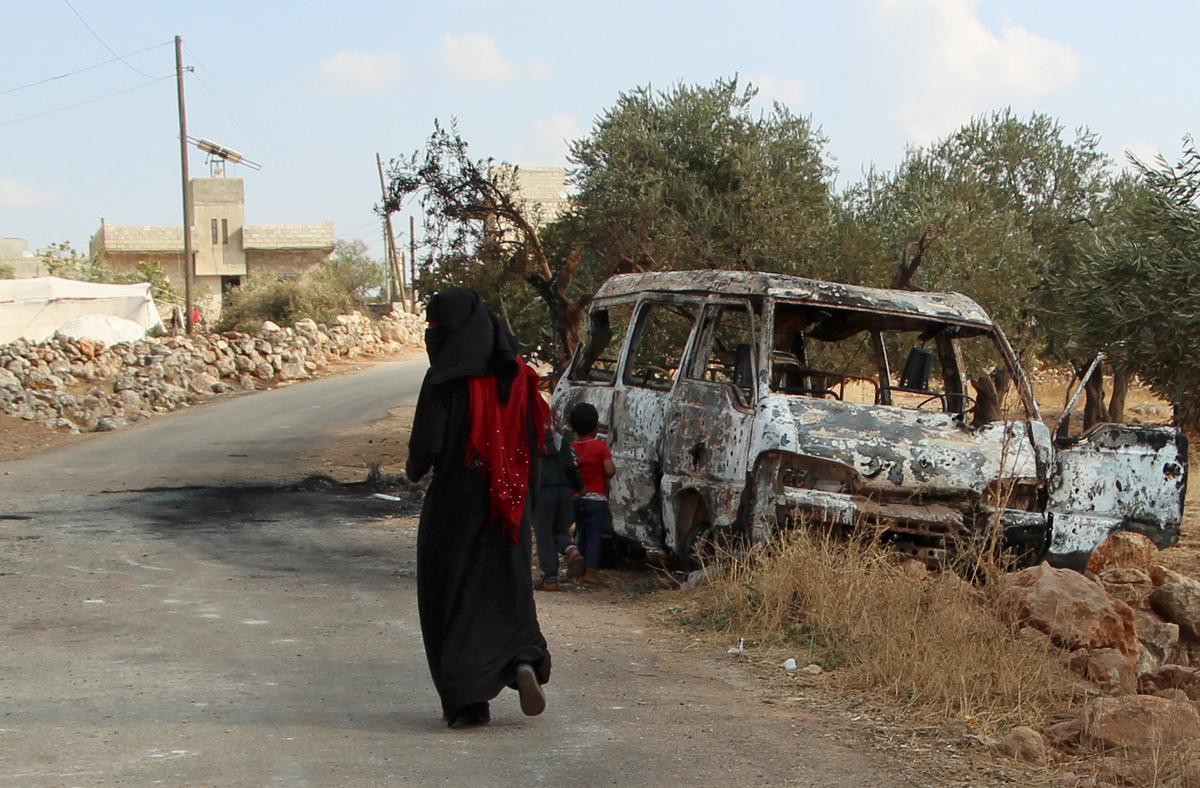 A woman walks past a wrecked van near the northwestern Syrian village of Barisha. Local residents and medical staff tell NPR that noncombatant civilians were killed and injured in the van the night of the U.S. raid on the compound of ISIS leader Abu Bakr al-Baghdadi.

A Syrian farmer says his arm was blown off and his two friends were killed by U.S. helicopter fire in the village where American special forces were attacking the compound of ISIS leader Abu Bakr al-Baghdadi in October.

His account is supported by analysis of photos of shrapnel and of a damaged van. It runs counter to an earlier statement by the U.S. military that special forces “protected all of the non-combatants” during the Oct. 26 raid.

In response to NPR’s inquiry about the incident, a U.S. defense official said the military will review what happened.

Cousins Khaled Mustafa Qurmo, 27, and Khaled Abdel Majid Qurmo, 30, were driving their friend home on Oct. 26 when helicopters fired at their van, according to the friend, Barakat Ahmad Barakat, 30, who survived the attack.

Barakat said he and his friends rushed out of the car, but one fell, his legs filled with shrapnel. Barakat took his other friend in his arms.

He was cradling his wounded friend in his arms, he said, when another airstrike tore off his hand, which had been holding up his friend’s head. Barakat ran for cover and both cousins died.

“Am I Baghdadi? How is this my fault? I’m just a civilian. I didn’t have any weapons,” Barakat said. “We’re farmers. I make less than a dollar a day. Now I’m handicapped, and my two friends are in their graves.”

When President Trump announced on Oct. 27 that Baghdadi had killed himself during a U.S. raid, NPR sought witnesses and learned of the possible civilian casualties from one of the victims’ relatives, then collected evidence of the claim over the course of several weeks. 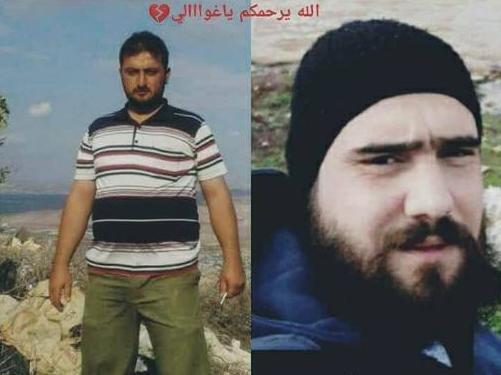 Khaled Mustafa Qurmo (left) and Khaled Abdel Majid Qurmo died of shrapnel wounds to the chest, according to autopsy reports. 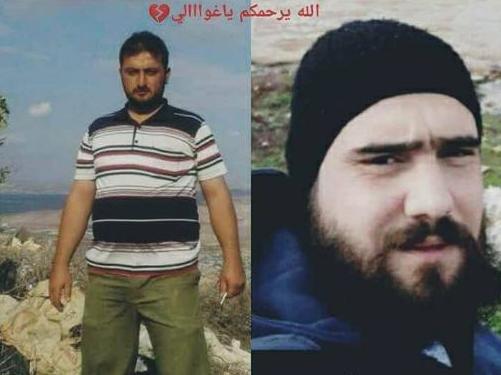 Khaled Mustafa Qurmo (left) and Khaled Abdel Majid Qurmo died of shrapnel wounds to the chest, according to autopsy reports.

A U.S. defense official asking not to be named said by email, “This is the first report we have received of possible civilian casualties.”

“Initial reports are that the white van at the scene of the Baghdadi raid had fired on U.S. helicopters participating in the raid. Surveillance footage will be reviewed to determine if an investigation needs to be opened based upon this additional information,” the official said.

But seven relatives of the dead said the men who were killed operated a van service and had no connection to ISIS or any armed group. Barakat said the van carried no weapons.

The relatives spoke to NPR by phone, Facebook and video chat.

Video of the wreckage

One relative sent a cellphone video he said was filmed at night shortly after the attack. It showed a destroyed van and two bodies in the dirt, pockmarked and bloodied, and a severed hand next to the head of one of the bodies.

The cousins died of shrapnel wounds to the chest, according to autopsy reports by a Syrian doctor with the Union of Medical Care and Relief Organizations, an international medical group. 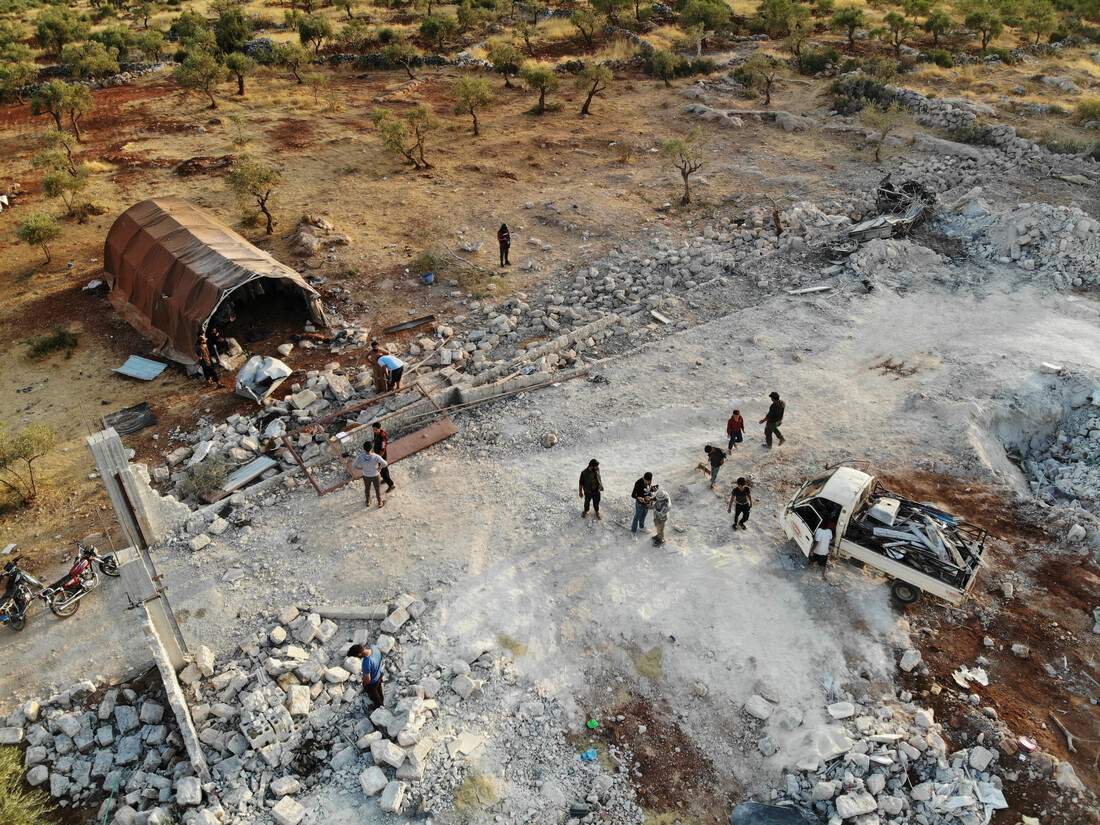 An aerial view taken on Oct. 27 shows the site that was hit by helicopter fire near the northwestern Syrian village of Barisha, where ISIS leader Abu Bakr al-Baghdadi died during a U.S. military raid. 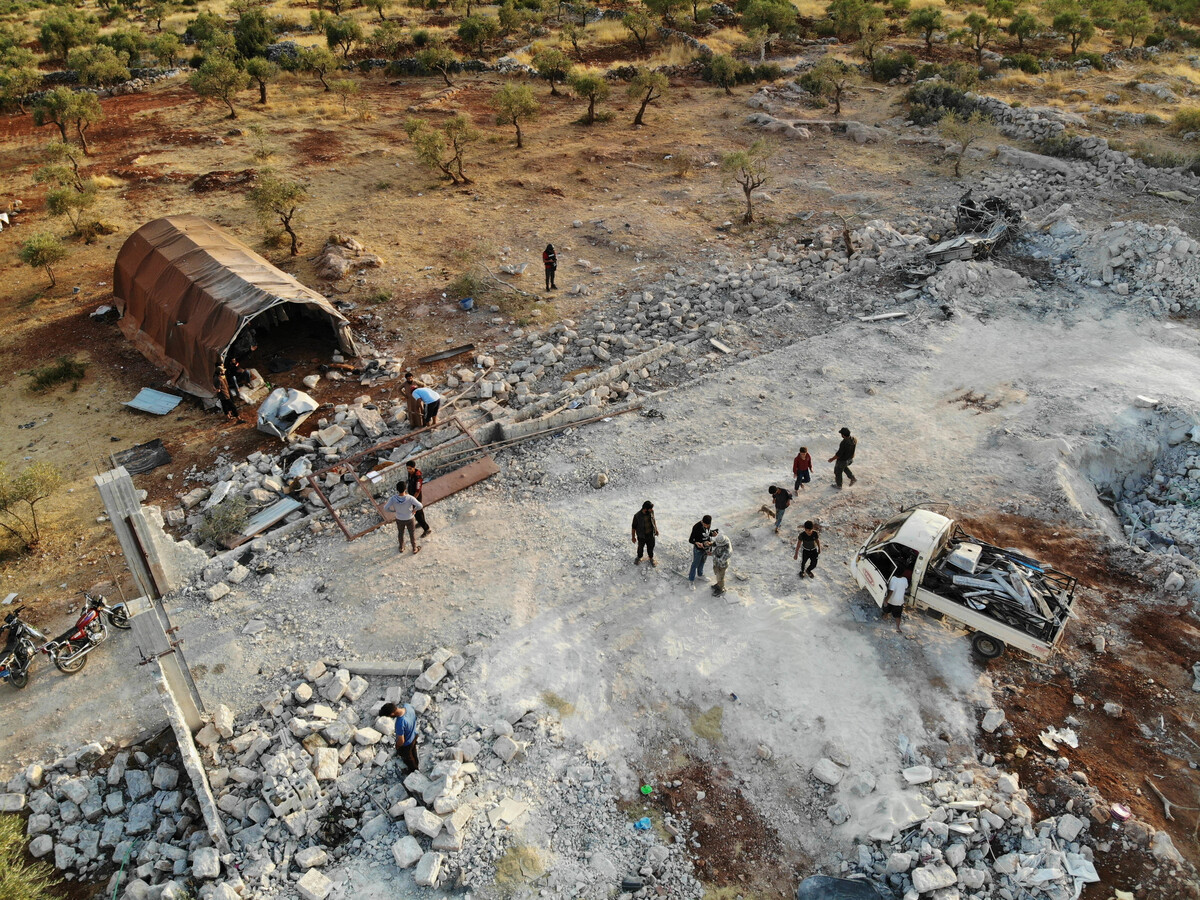 An aerial view taken on Oct. 27 shows the site that was hit by helicopter fire near the northwestern Syrian village of Barisha, where ISIS leader Abu Bakr al-Baghdadi died during a U.S. military raid.

The U.S. military wouldn’t say whether its helicopters attacked the van.

But Marc Garlasco, a former Pentagon official who recently investigated strikes in Syria for the United Nations, reviewed photos of shrapnel from the scene that relatives provided to NPR and said it appears the damage could have come only from Hydra-70 rockets, a type fired by U.S. military helicopters. He said photos of the damaged vehicle indicate it was hit by airstrikes, not from ISIS fighters on the ground.

The secondary strikes on the men after they had escaped the van were consistent, he said, with a U.S. military practice of targeting “squirters” — people perceived to be the enemy running away from an attack.

If these were indeed noncombatant civilians who were killed and injured, Garlasco said Americans should not dismiss it as collateral damage.

“It’s hard, you know, you want to talk to Joe Sixpack and explain to him why he cares that two people were killed when you’re by some very high-value target [who] was killed,” Garlasco said. “What if the deaths of those two people then lead to someone in that family eventually becoming the new Baghdadi? … When people are resentful, then they join ISIS. And this just becomes a death spiral for everyone.”

There are numerous reports of civilian deaths by U.S.-led coalition forces fighting ISIS. The Pentagon last month acknowledged at least 1,346 civilians in Syria and Iraq had been “unintentionally killed by Coalition actions” from August 2014 through September this year, but human rights and conflict monitors estimate the figure is higher.

A cousin and neighbor of the cousins killed during the October raid on Baghdadi said their young children now call out for their father in the street. “It’s just crying and anger here,” he said. He would not give his name to speak about the implications of an alleged U.S. attack.

The U.S. military’s Central Command said that “where possible and when appropriate,” the U.S. offers condolence payments to families of civilians who “may have been inadvertently killed or injured by U.S. forces while we are engaged with enemy forces.”

Fewer than five families in Syria have been compensated by the U.S. in recent years, according to Dan Mahanty of the Center for Civilians in Conflict advocacy group.

Now Barakat is missing his right hand and part of his forearm, and can’t move his fingers on his left hand because of slashed tendons.

He wants justice and he wants to register a complaint with the U.S. military and seek compensation for himself and his friends’ children. But doesn’t know how.

The attack still haunts him, he said: “The sound of the helicopter is still buzzing in my head.”