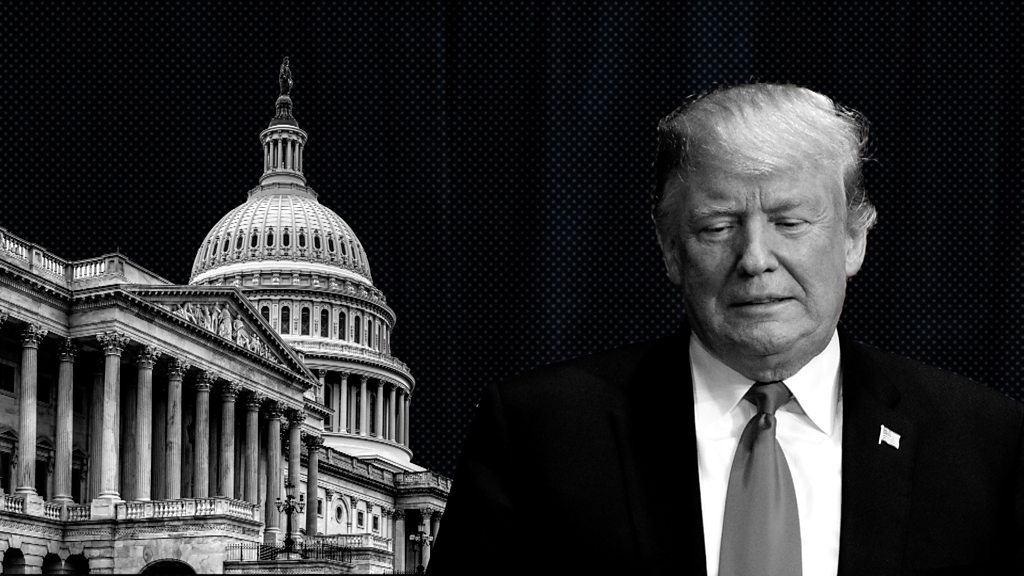 The impeachment investigation into Donald Trump has entered a new phase as the House Judiciary Committee begins hearings into Mr Trump’s conduct.

The public testimony by four experts on constitutional law comes one day after the House Intelligence Committee laid out the case for removing Mr Trump.

If impeachment passes in the House, the US Senate will put Mr Trump on trial.

The impeachment process began in September after an anonymous whistleblower complained to Congress about a July phone call by Mr Trump to the president of Ukraine, in which Mr Trump appeared to tie US military assistance to Ukraine launching investigations which would help him politically.

The White House has denied allegations made by Democrats – that Mr Trump put his own personal political interests “above the national interests of the United States” by soliciting foreign interference in the 2020 US elections, as the 300-page report argues.

After the report’s release on Tuesday, White House spokeswoman Stephanie Grisham said that it “utterly failed to produce any evidence of wrongdoing”.

Speaking from London, where he is attending a Nato summit, Mr Trump called the Democratic effort “very unpatriotic”.

Among formal impeachment charges expected to be considered by the judiciary committee are abuse of power, obstruction of justice and contempt of Congress.

Democrats are keen to hold a vote on impeachment in the House of Representatives before the end of the year, with the prospect of a trial in the Senate perhaps as early as January 2020.

What is the judiciary committee’s role?

The judiciary committee has the power to formally draft articles of impeachment and submit them for a full vote in the House of Representatives.

The committee is hearing on Wednesday from four law professors – three picked by Democrats and one by Republicans.

The lawyers will interpret the impeachment clause of the constitution, which allows for presidents to be removed from office due to “high crimes and misdemeanours”.

The White House was invited to participate in the hearing, but on Sunday declared that they would not send any administration officials to attend. Mr Trump was scheduled to return from London to Washington later on Wednesday, after the first judiciary hearing has concluded.

But on Wednesday, Mr Trump announced that he would depart early, skipping a final news conference “because we did so many over the past two days”. His hasty departure came soon after a video emerged of other world leaders at the Nato conference appearing to mock him.

What has Trump said about the experts?

“They get three constitutional lawyers… and we get one,” Mr Trump said on Tuesday during a bilateral meeting with Canadian Prime Minister Justin Trudeau in London. “That’s not sounding too good, and that’s the way it is.

“It’s all nonsense, just wasting their time, and we get one. Ok. Nobody needs to know anything about constitutional law,” he said.

What will the experts say?

The opening statements of the four witnesses has already emerged in US media.

Prof Feldman will say that the “evidence clearly constitutes” an impeachable offence because Mr Trump’s interactions with Ukraine show him “corruptly using the powers of the presidency for personal political gain”.

Prof Karlan will say Mr Trump “must be held to account” for “violating his oath to ‘faithfully execute’ the laws and to ‘protect and defend the constitution'”.

Mr Trump has attacked the “safeguards against establishing a monarchy in this country”, Prof Gerhardt states.

“The president’s serious misconduct, including bribery, soliciting a personal favor from a foreign leader in exchange for his exercise of power, and obstructing justice and Congress are worse than the misconduct of any prior president, including what previous presidents who faced impeachment have done or been accused of doing,” he will say, according to his opening remarks.

Prof Turley, who was chosen by Republicans, will say “this is not how an American president should be impeached” and will warn that Democrats are setting a dangerous precedent.

“I get it. You are mad. The President is mad. My Democratic friends are mad. My Republican friends are mad….” he will say. “We are all mad and where has it taken us? Will a slipshod impeachment make us less mad or will it only give an invitation for the madness to follow in every future administration?”

What is Trump accused of?

Democrats say Mr Trump dangled two bargaining chips to Ukraine – $400m (£309m) of military aid that had already been allocated by Congress, and a White House meeting for Mr Zelensky – to obtain the investigations. They think this political pressure on a vulnerable US ally amounts to an abuse of power.

The first investigation Mr Trump wanted from Ukraine was into former Vice-President Joe Biden, his main Democratic challenger, and his son Hunter. Hunter joined the board of a Ukrainian energy company when Joe Biden was US vice-president.

The second Trump demand was that Ukraine try to corroborate a conspiracy theory that Ukraine, not Russia, interfered in the last US presidential election. This theory has been widely debunked, and US intelligence agencies are unanimous in saying Moscow was behind the hacking of Democratic Party emails in 2016.

How does impeachment work?

Impeachment is the first part – the charges – of a two-stage political process by which Congress can remove a president from office.

If, following the hearings, the House of Representatives votes to pass articles of impeachment, the Senate is forced to hold a trial.

A Senate vote requires a two-thirds majority to convict and remove the president – unlikely in this case, given that Mr Trump’s party controls the chamber.

Only two US presidents in history – Bill Clinton and Andrew Johnson – have been impeached, but neither was convicted.

President Richard Nixon resigned before he could be impeached.