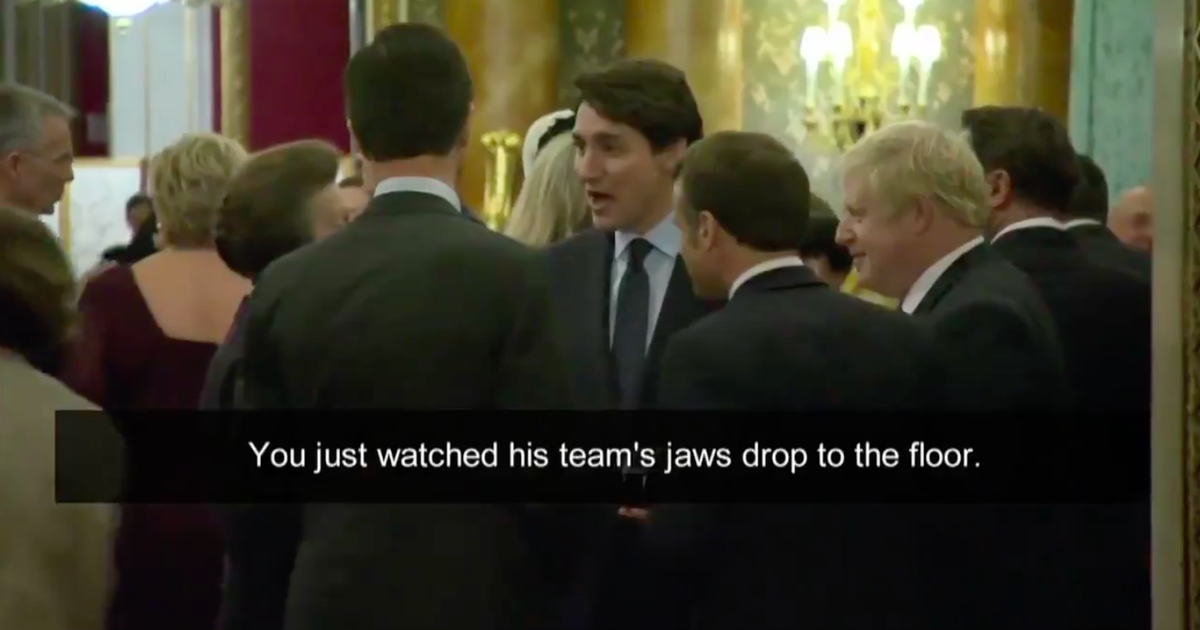 For anyone whose job is to keep a straight face around Donald Trump, dozens of private conversations such as these must happen every week, and in much stronger language. But to catch world leaders apparently sharing a laugh over the president’s foibles is rare.

This video, from the reporting pool via the Canadian Broadcasting Corporation, shows Canadian prime minister Justin Trudeau, British PM Boris Johnson, French President Emmanuel Macron, and Dutch PM Mark Rutte alongside a stiff bouffant appearing to belong to HRH Princess Anne. The group are enjoying a drink and a chat at a Buckingham Palace reception after the day’s formalities at the NATO summit in London.

The video is low on context, but the leaders appear to be having a good chuckle about Trump’s press conferences earlier in the day, which saw contentious moments between Trump and the Canadian and French leaders.

“Is that why you were late?” Johnson asks Macron.

“He’s late because he takes a 40-minute press conference off the top,” interjects Trudeau cheerfully.

In another part of the conversation after a cut in the video, Trudeau can clearly be heard and seen saying “You just watched his team’s jaws drop to the floor.”

Macron and Princess Anne both lean in for a chat too, although their comments don’t carry to the pool camera operator’s mic, and are sadly likely lost to the news ether.

Commentators from New York Times White House correspondent Maggie Haberman to former government staffers noted how extraordinary it was to actually see world leaders who should be the POTUS’ peers bitching about Trump over a beer. It was as though they were at Friday night office drinks and Trump was the guy who talked over everyone in meetings.

These leaders all know they are on tape all the time. They know what they’re doing. They’re sending a message to the world. Even Boris Johnson, who faces an election in days in a country in which Trump is toxically unpopular, is in on it. https://t.co/gi4UPLgKMX

This video, coupled with the videos from the press portions of the bilateral meetings w Macron &Trudeau are so embarrassing for the US. @realDonaldTrump can’t hold his own with the other leaders -they know it & are now much more emboldened. We look like a Banana Republic @ NATO. https://t.co/u9Tt4wPsp6

If you ever wondered what world leaders chat about in private, well here at NATO they’re gossiping about #Trump.

Others just enjoyed the gossipy vibe of Trudeau’s ribbing.

It’s worth noting that in years gone, despite his own Trump comparisons, Johnson had strong words about the now president.

And while neither Princess Anne or Macron’s comments are audible in the video, it’s hard to imagine Monsieur Le President wouldn’t need a good-natured vent after a day like this.

“Would you like some nice ISIS fighters?” President Trump asks.

Watch the tense exchange between the leaders ahead of this week’s NATO summit in London. https://t.co/AY5isJOIy8 pic.twitter.com/C7OIV1kX4v