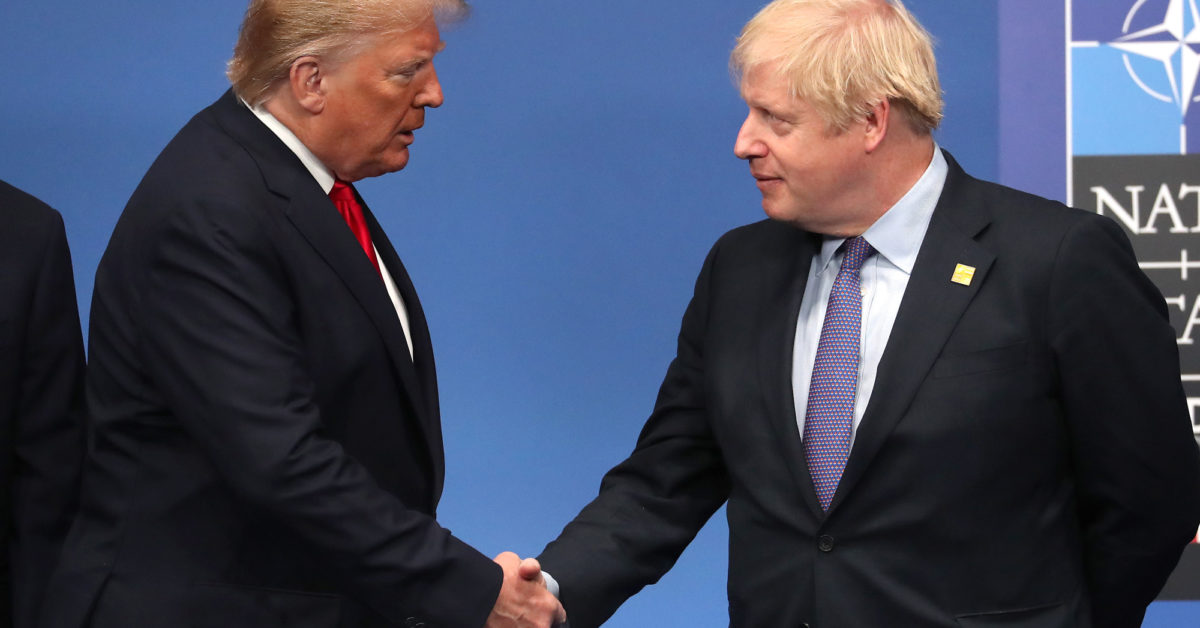 The British Conservative Party was given a huge boost on Wednesday when Donald Trump left the U.K. without smashing up its election strategy. The U.S. president was supposed to hold a press conference at the end of a gathering of NATO leaders but canceled it, saying he had answered enough questions.

“We won’t be doing a press conference at the close of NATO because we did so many over the past two days. Safe travels to all!” the commander-in-chief said on Twitter.

It means U.K. Prime Minister Boris Johnson survived the Trump visit without any extra obstacles being put in his way ahead of the December 12 vote.

“There are huge sighs of relief all round,” said Conservative ex-Cabinet minister Andrew Mitchell, who is fighting to keep his Sutton Coldfield seat in the election. “It’s a great triumph for the prime minister.”

Johnson was caught smirking on camera as other world leaders appeared to share a joke about the president at a Buckingham Palace reception on Tuesday night.

Another Tory fighting to keep their seat in the English Midlands, but who wished to remain anonymous, said, “It landed pretty well. The prime minister couldn’t have played his role any better. I think the visit will pass without too much controversy.”

Johnson spent two days working hard to avoid being pictured with Trump, who is deeply unpopular in the U.K. He did not greet the president at the door of Downing Street when world leaders arrived for a reception on Wednesday night. The only photos of Johnson and Trump together were the full NATO group shot and the obligatory opening handshake snap.

They also didn’t hold a joint press conference. Instead, they had a late-night, one-to-one meeting in Downing Street’s grand White Room, which was not announced in advance and was mentioned on the U.K. government website with little fanfare afterward.

Johnson even swerved mentioning Trump by name when he held his own press conference at the end of the NATO meeting. Asked if he thought the president was good for the West, the PM said the U.S. had “massively contributed to NATO, has been for 70 years a pillar of stability for our collective security.”

He added, “If you want evidence of the willingness of the United States to stand shoulder to shoulder with us, I would point you back to what happened in the case of the poisonings in Salisbury … The United States actually expelled 60 [Russian diplomats]. That was a fantastic testament I think to the transatlantic alliance.”

Not everything went smoothly.

Johnson was caught smirking on camera as other world leaders appeared to share a joke about the president at a Buckingham Palace reception on Tuesday night. The footage showed him in conversation with Canada’s Justin Trudeau, France’s Emmanuel Macron, the Netherlands’ Mark Rutte and Princess Anne.

Trump, in response to the video, called Trudeau “two-faced” and then abruptly canceled his planned closing news conference at the NATO gathering, but did not comment on Johnson’s involvement. A Downing Street official insisted the prime minister was not mocking his counterpart.

At his own press conference on Wednesday, Johnson was asked, in light of the footage, if he took Trump seriously. “That is complete nonsense,” he said. “I don’t know where that has come from.”

But the prime minister did a little playing with fire. On the campaign trail on Tuesday, he insisted he wanted to push ahead with a French-style tax on U.S. tech giants — a major point of contention between Trump and Macron. “I do think we need to look at the operation of the big digital companies … and the amount of tax that they pay,” Johnson told reporters. “They need to make a fairer contribution.”

During his press conference on Wednesday, he also appeared to reject a demand from Trump that the U.K. take back British-born Islamic State fighters currently held by the U.S. in Syria.

Trump also helped Johnson when he said he would not want the British health service included in a U.S.-U.K. trade deal after Brexit, even if it were offered “on a silver platter.”

“One of the difficulties we have in taking these people back is that our legal systems make it very difficult for us to secure convictions,” he said. “If people go out to break the law, to fight in terrorist organizations, then they really have to take the consequences.”

Despite the minor video controversy, Trump was on his best behavior.

He heeded a warning from his U.K. counterpart not to comment on the general election — almost. Asked to make a comment during an impromptu press conference on Tuesday, Trump said he did not want to “complicate” matters, before adding that Johnson was “very competent” and would do a “good job” if reelected.

The candidate fighting in the Midlands argued that Trump could have been accused of snubbing Johnson if he had not offered at least some endorsement. “To be fair to Trump, he pitched that just about right,” the candidate argued. “He said, ‘Boris is a great guy, I don’t know Jeremy [Corbyn], I’ll work with whoever wins.’ If I were the president of the U.S.A. that’s what I would have said.”

Trump also helped Johnson when he said he would not want the British health service included in a U.S.-U.K. trade deal after Brexit, even if it were offered “on a silver platter.” The opposition Labour Party has made hay with leaked documents which they claim show U.S. and U.K. negotiators discussed drug patents in preliminary talks on a deal.

But Corbyn failed to kick up as much of a row over the NHS as his supporters may have wanted.

After Trump insisted he had no interest in the health service, Corbyn said he was “pleased” with the intervention, before adding on BBC Radio 2: “If that’s the case, why have these talks gone on for two years and why were they kept secret? … There is very legitimate grounds for very serious concern here.”

He had hoped to raise the issue with Trump during the Buckingham Palace reception on Tuesday evening, but failed to do so.

During his press conference on Wednesday, a relieved Johnson insisted the NHS would not be on the table in a trade deal with the U.S. “Everybody by now has rumbled this for the nonsense it is,” he said. “And I think by now we’re starting to scrape the bottom of the barrel.”

Sign up for free to POLITICO’s UK 2019 Election Sprint newsletter and catch up with our daily snapshot of key moments in the run up to the U.K.’s December 12 general election and immediately afterwards.