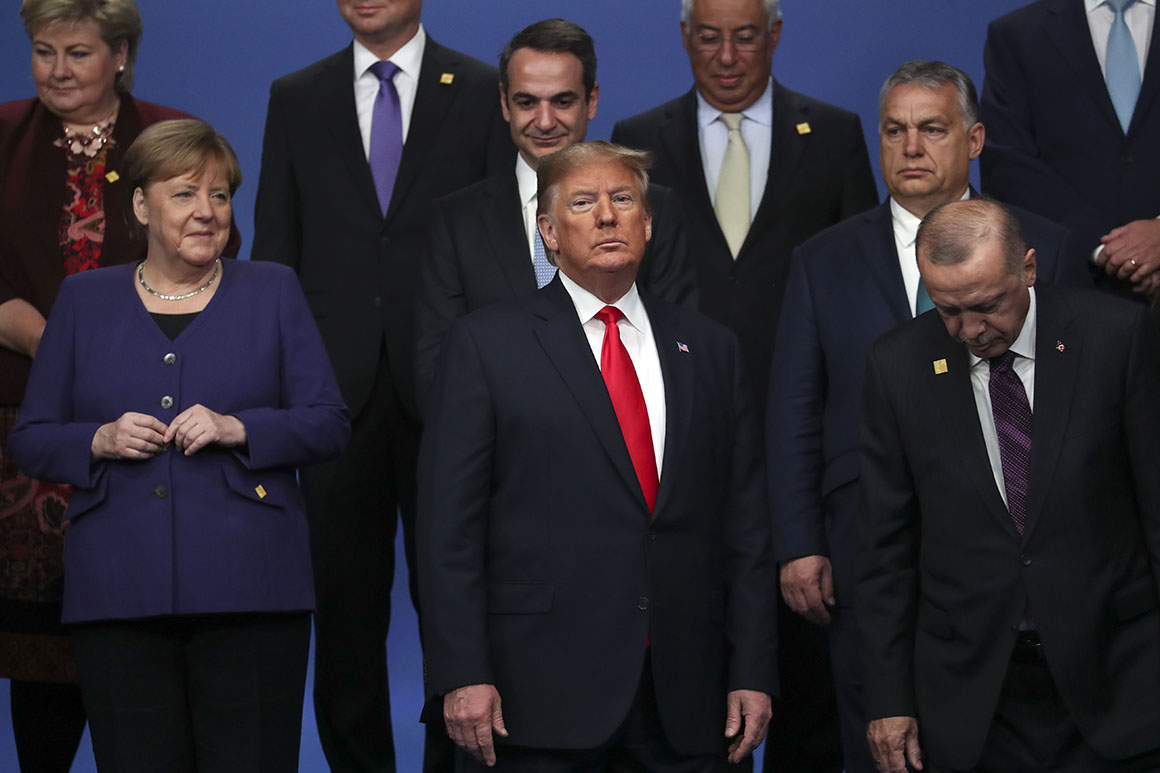 It was an abrupt and surprising end to the two-day gathering of world leaders, with Trump declining to take a final victory lap on his talking point — echoed by other NATO leaders — that he was responsible for nudging countries to increase their domestic defense spending. That’s a foreign policy win Trump can tout on the campaign trail in 2020.

Instead, everyone at the NATO gathering was left chattering about a video released Wednesday morning that showed Canadian Prime Minister Justin Trudeau, French President Emmanuel Macron and British Prime Minister Boris Johnson animatedly talking over drinks about Trump at a Tuesday evening reception.

Trudeau said he was simply recounting White House aides’ reaction to Trump’s sudden announcement during their bilateral meeting that he planned to host the next Group of Seven gathering of world leaders at Camp David. On the video, Trudeau pantomimes his own jaw dropping, as he describes how people reacted to something Trump said.

“I think everyone’s team, every different leader has teams who every now and then have their jaws drop at unscheduled surprises,” Trudeau told reporters. “We recognize that as we talk to G7 leaders there is an interest in where the next G7 meeting is going to be, and I was pleased to share with them the story of how that came about.”

Macron in a separate press conference declined to comment on what he called the “stolen video” of the leaders huddled together and gossiping.

Trump wasn’t about to let it go.

“Well, he’s two-faced,” the president said when asked about Trudeau and the video. Trump added that Trudeau, while a “nice guy,” was probably upset by his request that Canada increase the amount of money it spends on defense as part of NATO’s military alliance.

The back-and-forth wasn’t even the weirdest part of the day. It was soon eclipsed by a moment in which Trump was caught on a hot mic congratulating himself during a luncheon for calling Trudeau “two-faced.”

“That was funny,” the mic caught Trump saying after he mocked the media’s harried reaction to the sudden cancellation of a press conference. Trump called off the press conference hours after the video surfaced, saying he’d already spoken to the press extensively for more than 120 minutes on Tuesday over three separate bilateral meetings, making further comments unnecessary.

NATO-goers and White House reporters were equally surprised Wednesday when the Turkish government posted a photo online of Trump meetings with President Recep Tayyip Erdoğan, a meeting that had not been listed on the official White House schedule.

The get-together drew attention as Trump has taken heat for agreeing to withdraw some American troops in Syria, which allowed Turkey to attack Kudish forces that had been fighting side-by-side with U.S. troops in the battle against the Islamic State.

Trump said he and Erdoğan discussed Syria and the Kurds, and he proclaimed that an agreement to pause fighting in the region was holding, even though Turkey has not withdrawn its own forces. Several hundred U.S. troops have remained in the country to protect oil infrastructure.

“That border is a mess for a long time. We pulled our soldiers out and took over the oil. We have soldiers where the oil is. And that’s the way I like it,” Trump said, expressing his views on foreign policy in especially stark terms.

Toward the end of the day, the pull of domestic politics too strong for Trump to avoid — especially as the House Judiciary Committee kicked off a public hearing to lay out the legal arguments for impeachment.

Trump continued to dismiss the proceedings as a “scam” and “hoax” and called House Intelligence Chairman Adam Schiff, the face of the impeachment inquiry, a “stone cold loser,” just as he did on Tuesday. But Trump also expressed disappointment that the hearings were happening against the backdrop of the NATO meeting.

“To do it on a day like this where we’re in England and some of the most powerful countries in the world having very important NATO meetings. And it just happened to be scheduled on this day. It’s really honestly, it’s a disgrace,” he said.

Trump argued it was a poor move for the country for the Democrats to hold such a hearing.