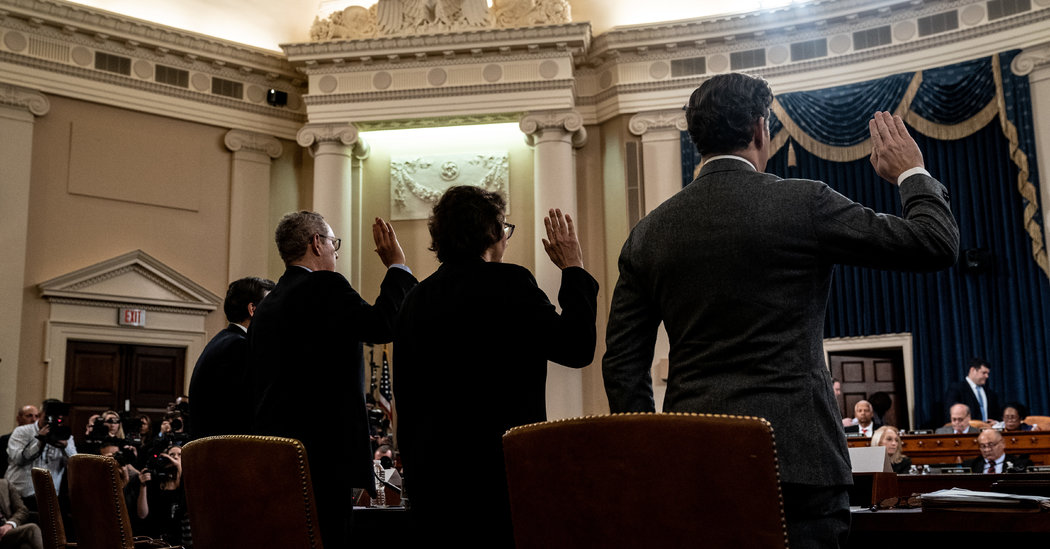 WASHINGTON — The House Judiciary Committee opened an epic partisan clash over the impeachment of President Trump on Wednesday at a hearing where Democrats and Republicans offered up dueling legal scholars who disagreed over whether the president’s conduct rose to the constitutional threshold to warrant his removal from office.

At the start of a new phase in Democrats’ fast-moving push to impeach Mr. Trump, three law professors they invited to testify declared that the president’s move to press Ukraine to investigate his political rivals constituted an abuse of power that was clearly impeachable, crossing crucial boundaries established by the nation’s founders to ensure the sanctity of American democracy. The appropriate and necessary remedy, they argued, was impeachment.

“If what we’re talking about is not impeachable, then nothing is impeachable,” Michael J. Gerhardt, a professor at the University of North Carolina, told the panel. “This is precisely the misconduct that the framers created the Constitution, including impeachment, to protect against.”

A fourth witness, called by Republicans, said that might be the case, but argued that Democrats had failed to prove their case against Mr. Trump and risked dangerously lowering the standards for impeachment for decades to come if they drove forward with a “fast and narrow,” and entirely partisan, process.

“I am concerned about lowering impeachment standards to fit a paucity of evidence and an abundance of anger,” said the witness, Jonathan Turley, a law professor at George Washington University. “To impeach a president on such a record would be to expose every future president to the same type of inchoate impeachment.”

The dispute unfolded as members of both parties braced for a historic confrontation in the weeks to come over whether to make Mr. Trump only the third president in history to be impeached.

“Are you ready?” Speaker Nancy Pelosi, Democrat of California, privately asked a roomful of Democrats meeting behind closed doors before the Judiciary Committee’s proceedings began. They were, the lawmakers answered in unison, according to people who attended the session who discussed it on the condition of anonymity to describe a confidential gathering.

Nearby, Vice President Mike Pence was delivering his own battle cry to Republicans at their weekly conference meeting. “Turn up the heat” on House Democrats, he instructed them, according to an official familiar with his comments who spoke about them on the condition of anonymity.

Inside the House Ways and Means Committee’s hearing room, the political divisions briefly receded amid a loftier debate among the constitutional scholars about executive power and accountability, and the standards by which Congress should move to oust a sitting president.

Noah Feldman, a professor at Harvard, argued that Mr. Trump’s decision to withhold a White House meeting and military assistance from Ukraine while he demanded political favors from its president was a classic impeachable abuse of power.

“If we cannot impeach a president who uses his power for personal advantage, we no longer live in a democracy,” Mr. Feldman said. “We live in a monarchy or a dictatorship.”

But Mr. Turley argued that Democrats were tainting the very concept of impeachment by sloppily applying what should be an ironclad set of standards for the most drastic remedy available to hold an American president accountable for wrongdoing. For instance, he said, Democrats were interpreting the concept of bribery too broadly when they used the word to describe Mr. Trump’s conduct.

“This isn’t improvisational jazz — close enough is not good enough,” Mr. Turley said. “If you’re going to accuse a president of bribery, you need to make it stick, because you’re trying to remove a duly elected president of the United States.”

Within the first half-hour of the Judiciary Committee’s work, it was clear that the impeachment proceedings had entered a new, more cantankerous stage. The panel, stacked with some of the House’s most ideologically progressive and conservative lawmakers, lived up to its reputation for partisan rancor. Republicans repeatedly tried to grind the proceedings to a halt with parliamentary demands, while the Democrats tried to press forward undaunted, eyeing an impeachment vote by the full House before Christmas.

Democrats and Republicans also sparred bitterly over the findings of the two-month-long House Intelligence Committee investigation, concluded a day earlier. In a 300-page report released on Tuesday, the Intelligence panel asserted that Mr. Trump abused his office by pressuring Ukraine to help him in the 2020 presidential election, while withholding a coveted White House meeting for Ukraine’s president and $391 million in security assistance, and then tried to conceal his actions from Congress. Republicans submitted dissenting views that rejected any wrongdoing.

“President Trump welcomed foreign interference in the 2016 election,” said Representative Jerrold Nadler, Democrat of New York and the Judiciary Committee’s chairman, trying to establish a web of misconduct by Mr. Trump broader than just Ukraine. “He demanded it for the 2020 election.”

Mr. Nadler added: “The president has shown us his pattern of conduct. If we do not act to hold him in check — now — President Trump will almost certainly try again to solicit interference in the election for his personal, political benefit.”

Questioning the witnesses, Democrats hinted at articles of impeachment that could be brought forward in public as soon as next week. They included abuse of power and bribery related to the Ukraine matter and obstruction of justice stemming from the findings of Robert S. Mueller III, the special counsel who investigated the Trump campaign’s ties to Russian election interference. They also appeared to be building a case to charge Mr. Trump with obstruction of Congress for his refusal to allow aides to testify in the impeachment inquiry and a blockade on documentary evidence requested by the House.

Republicans on the panel, who represent some of the most outspoken conservative defenders of Mr. Trump in the House, sought to portray the case as a political hit job. And they disputed vigorously that Democrats had proved that Mr. Trump directed a pressure campaign on Ukraine.

“This may be a new time, a new place and we may be all scrubbed up and looking pretty for impeachment,” said Representative Doug Collins, Republican of Georgia. “This is not an impeachment. This is simply a railroad job, and today is a waste of time.”

Mr. Trump, in Britain for the 70th anniversary of the North American Treaty Organization, called impeachment “a dirty word that should only be used in special occasions.”

The Judiciary Committee is expected to convene one to two more hearings before it begins drafting and debating articles of impeachment. In the coming days, the panel will almost certainly hear a formal presentation of evidence from Democratic and Republican lawyers for the Intelligence Committee on the conclusions of their investigation into the Ukraine matter.

The panel could also hold another session to allow Mr. Trump’s lawyers to present a formal defense, including by calling witnesses, if the White House requests it. Mr. Nadler has given the president and his team until Friday to decide whether they will participate in proceedings that they have so far shunned. Democrats must also decide whether to grant Republicans a minority day of hearings they formally requested on Wednesday.

Much of the day was given over to a historical discussion of the founders, their intent and the application of the Constitution’s reference to “high crimes and misdemeanors” in past presidential impeachments. But if the references were high-minded, the witnesses’ statements were quickly digested into the larger political debate raging on the dais.

Pamela S. Karlan, a Stanford law professor, told lawmakers that the president’s attempt to “strong-arm a foreign leader” would not be considered politics as usual by historical standards.

“Drawing a foreign government into our election process is an especially serious abuse of power because it undermines democracy itself,” Ms. Karlan said.

In Mr. Turley, Republicans reached for a well-respected scholar familiar to lawmakers, whose opposition to Mr. Trump’s policies, they believe, makes him a more powerful messenger than those who would reflexively defend him.

In a 53-page statement submitted to the committee, Mr. Turley made it clear that he was not a supporter of the president and believed that the Ukraine matter warranted investigation. But he said the facts were simply not yet developed and offered a lengthy rebuttal of his fellow witnesses.

“Impeachments have to be based on truths, not on assumptions,” Mr. Turley said. “That’s the problem when you move toward impeachment on an abbreviated schedule.”

He took particular aim at claims that Mr. Trump’s actions met the standard for bribery charges and obstruction of Congress. Without going to court to ask a judge to enforce their subpoenas, he argued, Democrats’ case for obstruction lacked important validation.