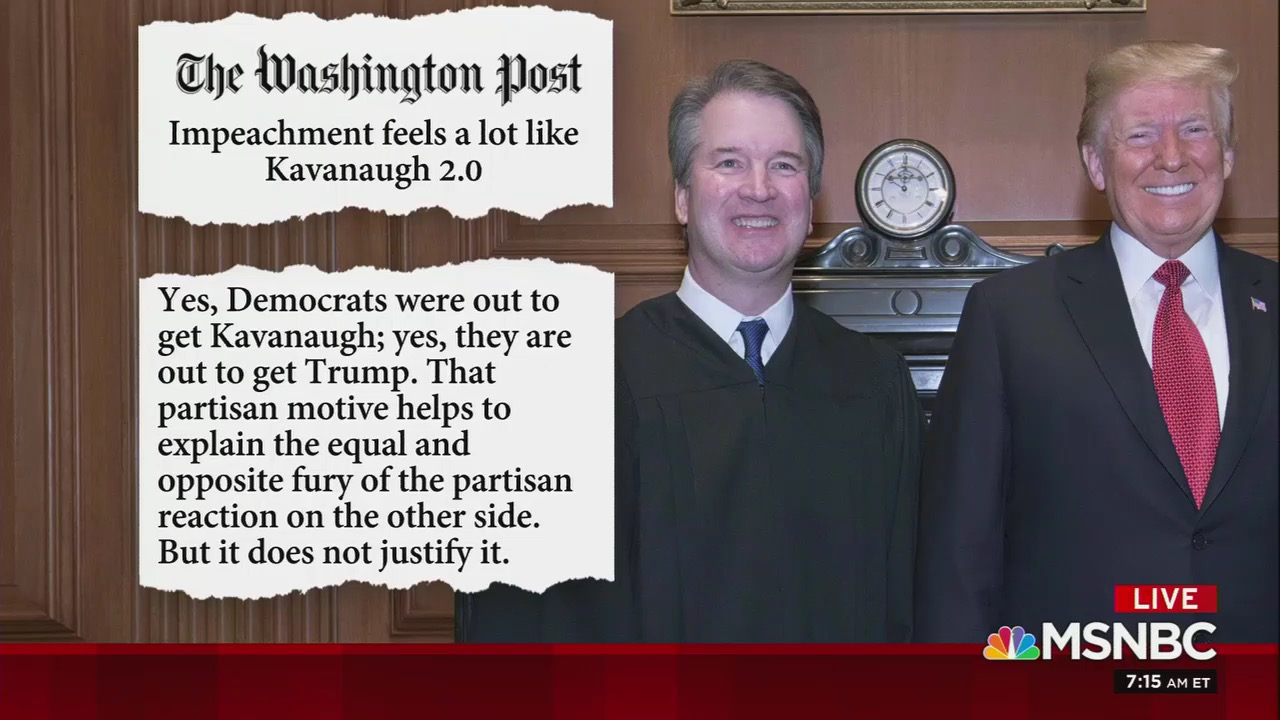 Liberal Washington Post columnist Ruth Marcus bashed the right as having trouble “accepting the facts,” on Morning Joe Tuesday. She was on MSNBC plugging her new anti-Kavanaugh book “Supreme Ambition,” which compares last year’s Supreme Court Justice confirmation hearings to the present day impeachment hearings. In it, Marcus argues that Republicans were unwilling to believe “the evidence” against Kavanaugh, just as they’re unwilling to believe the evidence for impeachment.

Morning Joe co-host Mika Brzezinski introduced Marcus and immediately let her plug her new book’s “case” against the GOP. The columnist actually acknowledged the clearly political motives of Democrats in both cases, before bizarrely dismissing the notion that this was not a reason to trust them.

Comically, she claimed Republicans were the ones ignoring “the facts:”

Well, you know, in both cases Republicans are worked up over bad motives rather than dealing with the facts at hand. So with Justice Kavanaugh during the confirmation hearings Republicans were unhappy and understandably so, that the Christine Blasey Ford allegations came up so late in the process and their argument was, Democrats will do anything to stop Justice Kavanaugh so we therefore can’t take this seriously. Similarly with impeachment we’ve heard Devin Nunes and a lot of other people arguing, well, Democrats have been out to get President trump, they were talking about impeaching him even before he was sworn into office. And so therefore, all of this is tainted. My point is, look at the facts. If the facts are serious enough in the case of Justice Kavanaugh to warrant not confirming him, in the case of President Trump to warrant impeaching him, those need to be taken seriously and motive shouldn’t matter in that situation.

You know the Trump Derangement Syndrome is real, when a journalist can claim conservatives were the ones ignoring the facts, when there were no facts presented by Democrats that corroborated any of Blasey Ford’s story. By contrast, there was evidence to corroborate Kavanaugh’s. Yet the left clung to their “Believe women! (and ignore facts!)” narrative no matter how absurd the accusations were. Similarly, the liberal media have been adamant that an impeachable offense occurred with the Trump phone call with Ukrainian President Zelensky, even when Zelensky himself has insisted there was no “quid pro quo” to investigate the Bidens.

A little while later, Brzezinski invited Marcus to make her point again. This time, Marcus got straight to the point: Republicans couldn’t accept the facts.

“I think in both cases Republicans were reluctant to grapple with the underlying facts,” she touted. What were those facts you ask? Oh, Bill Clinton attorney Max Stier said he witnessed Kavanaugh expose himself to a drunk woman at a Yale party, which, even that woman says she has no memory of. Sounds like some real strong evidence right? Yet Marcus insisted this would’ve been a bombshell testimony, had he been allowed to testify. (Marcus doesn’t mention his affiliation with Democrats or the Clintons, of course):

There were important witnesses, primarily a man named Max Stier...But the FBI refused to interview Max Stier because they were not instructed to do so by the White House. Republican senators who were aware of this allegation refused to insist that Max Stier be interviewed and, in fact, Senator Dianne Feinstein, the ranking Democrat, refused to get– get Max Stier interviewed. And similarly, Republicans have just been unwilling to deal with the serious facts and allegations against the President in the Ukraine matter.

Here are some facts, Marcus forgot to mention on MSNBC and most likely in her book too.