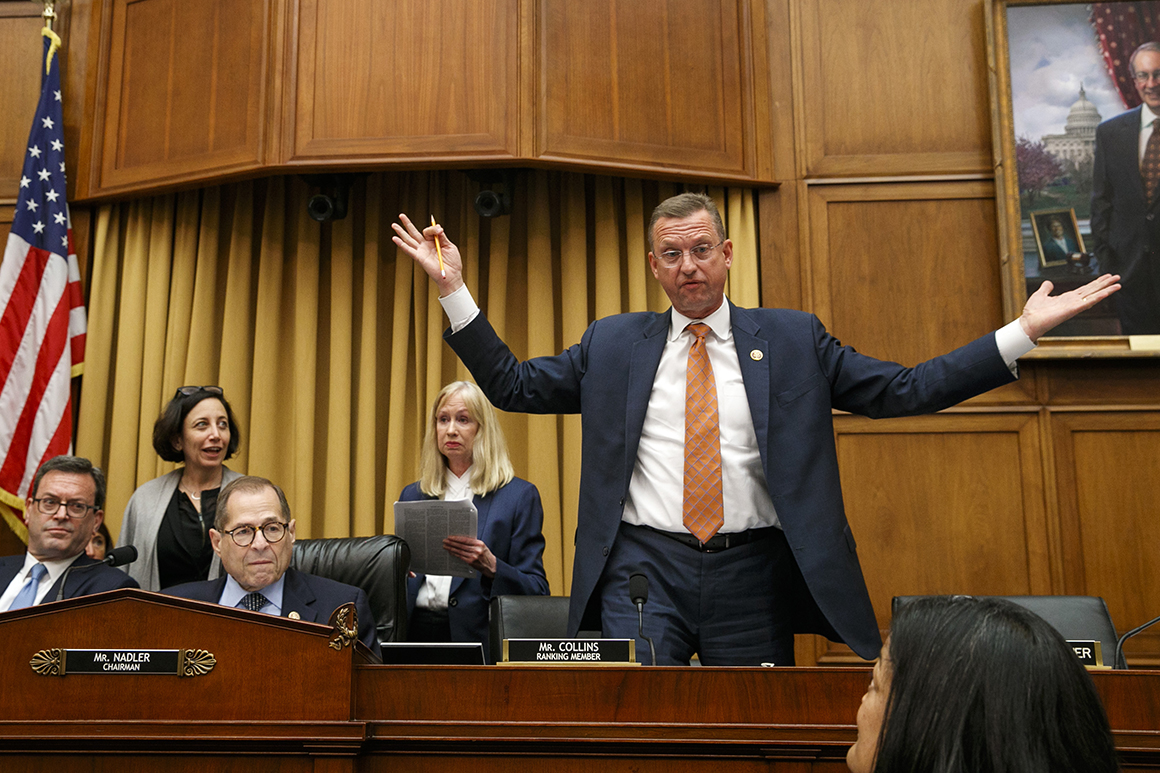 All of them are fierce defenders of President Donald Trump, and all are promising to hold nothing back as the impeachment proceedings shift from the House Intelligence Committee to the Judiciary panel.

“It is our duty to raise every parliamentary and procedural maneuver that we can that’s legitimate,” said Biggs, who chairs the House Freedom Caucus. “Not to be dilatory, but to legitimately point out how flawed this process has been and how weak the Democratic case is. We will do that aggressively and assiduously.

“Let me put it this way: It will be better TV than the Schiff hearing,” he added.

Republicans on the committee are expected to throw up a series of procedural roadblocks to try to blunt Democratic momentum in any way they can at the Judiciary Committee’s first impeachment hearing on Wednesday. It’s the kind of scorched-earth tactic Trump relishes — and Democrats fear.

Particularly with Trump declining to send lawyers to the hearing, he’s leaning on this cast of colorful characters to serve as his last line of defense in the House.

Democrats are bracing for the GOP to disrupt the hearings with procedural shenanigans, and they don’t want to be baited into any unnecessary process fights that could serve as a distraction. During a practice session on Tuesday, Democrats had people play the parts of Jordan and Rep. Doug Collins of Georiga, the top Republican on the committee, so members can be prepared for their antics.

Part of Democrats’ strategy is to stage a slew of somber, solemn hearings, which they hope will draw a contrast with the circuslike atmosphere they expect from the other side, according to a committee aide.

But Republicans are betting some of their Democratic colleagues won’t be able to resist a little drama, either. The Judiciary panel — which has jurisdiction over everything from immigration to guns — tends to attract partisan warriors on both sides.

“Jerry Nadler telling his members not to treat it like a circus is like the farmer telling the cows not to leave the fence after they’ve already left,” Collins said. “This is a committee that brought chicken to a hearing.”

To prepare for Wednesday’s impeachment hearing, Republicans on the Judiciary panel huddled with House Minority Leader Kevin McCarthy in the Capitol basement for over an hour Tuesday afternoon. And earlier in the day, a handful of key Republicans met with Vice President Mike Pence in his Senate office.

The meeting, which lasted roughly 30 minutes, was more of a pep talk than a strategy planning session. Jordan quipped that impeachment “may have come up.” Collins said it was “encouraging” to talk to Pence. And Rep. John Ratcliffe (R-Texas), a former prosecutor who sits on both the Judiciary and Intelligence committees, said Pence “wanted to thank us for the work that we’re doing.”

“Jerry Nadler telling his members not to treat it like a circus is like the farmer telling the cows not to leave the fence after they’ve already left.”

Leading the impeachment fight for Republicans will be Collins, a former attorney and military chaplain. Collins is also considering a Senate run in 2020, meaning his performance in the high-profile impeachment hearings could bolster his national profile and boost any potential bid.

Collins, known as a Southern spitfire among his colleagues, steered the GOP through several rowdy Judiciary hearings related to the Russia probe earlier this year. During the impeachment proceedings, Collins and his band of Republicans on the panel are expected to hammer Democrats over their process and the breakneck pace of their impeachment probe.

And because Republicans will have the power to call witnesses, offer evidence and issue subpoenas — although all subject to the Democratic majority’s approval — they may force a number of fights with their colleagues across the aisle.

“We want to be well-organized tomorrow and use our time effectively,” said Johnson, who chairs the conservative Republican Study Committee. “Most of us have very little interest in academic exercises.”

The shift to the Judiciary Committee also comes with other benefits for the GOP. While the Intelligence Committee has only nine Republicans, the fewest of any panel, the Judiciary panel has 17 GOP members keen to slug it out.

In addition to Collins, Jordan — one of Trump’s favorite attack dogs who speaks with the president regularly — is expected to play a starring role in the impeachment hearings. He already has two weeks of practice under his belt; Jordan was brought on to the House Intelligence Committee just for the panel’s televised hearings, during which he aggressively peppered witnesses while seeming to enjoy himself.

The former college wrestling champ was long a thorn in the side of GOP leadership when Republicans held the majority. But since losing the House, Jordan has been training his fire on Democrats, included forcing an Oversight Committee hearing to adjourn at one point because it was taking place at the same time as a closed-door deposition.

Then there’s Gaetz, a baby-faced conservative who frequently appears on Fox News and has positioned himself as a top Trump defender. The Florida Republican orchestrated one of the most infamous GOP stunts this year: dozens of House Republicans storming a secure facility in the Capitol basement. Members tried to barge into a closed-door deposition with an impeachment witness and refused to leave for hours — even ordering pizzas at one point.

Gaetz is also the one who fought with families scarred by gun violence and suggested in a tweet that Trump’s former attorney Michael Cohen was having an affair the day before his testimony — an episode that prompted an ethics probe.

Also on the panel is Gohmert, a voluble Texas lawmaker who once landed himself in hot water for grilling ribs on his office balcony. Gohmert is known for his weekly stemwinders on the House floor, dubbed “Gohmert Hour,” and for getting into fiery exchanges with his Democratic colleagues and hearing witnesses.

During one hearing amid the Russia probe, Gohmert expressed concern that “another socialist like Hitler” could rise to power and abuse the Justice Department’s authority — a remark that was rebuked by Democrats.

Gohmert is just one of several Judiciary members who also belong to the Freedom Caucus, a band of roughly 30 conservative rabble-rousers. Biggs, Jordan, Rep. Debbie Lesko of Arizona and Rep. Ken Buck of Colorado are other caucus members who also serve on the panel.

With the impeachment probe moving to the Judiciary Committee, GOP members feel like they will be on solid ground when the argument shifts back to process and they are able to engage in the political combat they are most comfortable with.

Republicans, however, admit that it has been somewhat challenging to plot their line of attack because Democrats have been keeping them in the dark on key details until the last minute. But they also say that’s made their planning easier in other ways.

“It means you can operate with a battle ax instead of a scalpel,” Biggs said. “You’re basically left with total warfare. You have to totally annihilate the [other side’s] argument.”

Kyle Cheney and Sarah Ferris contributed to this report.