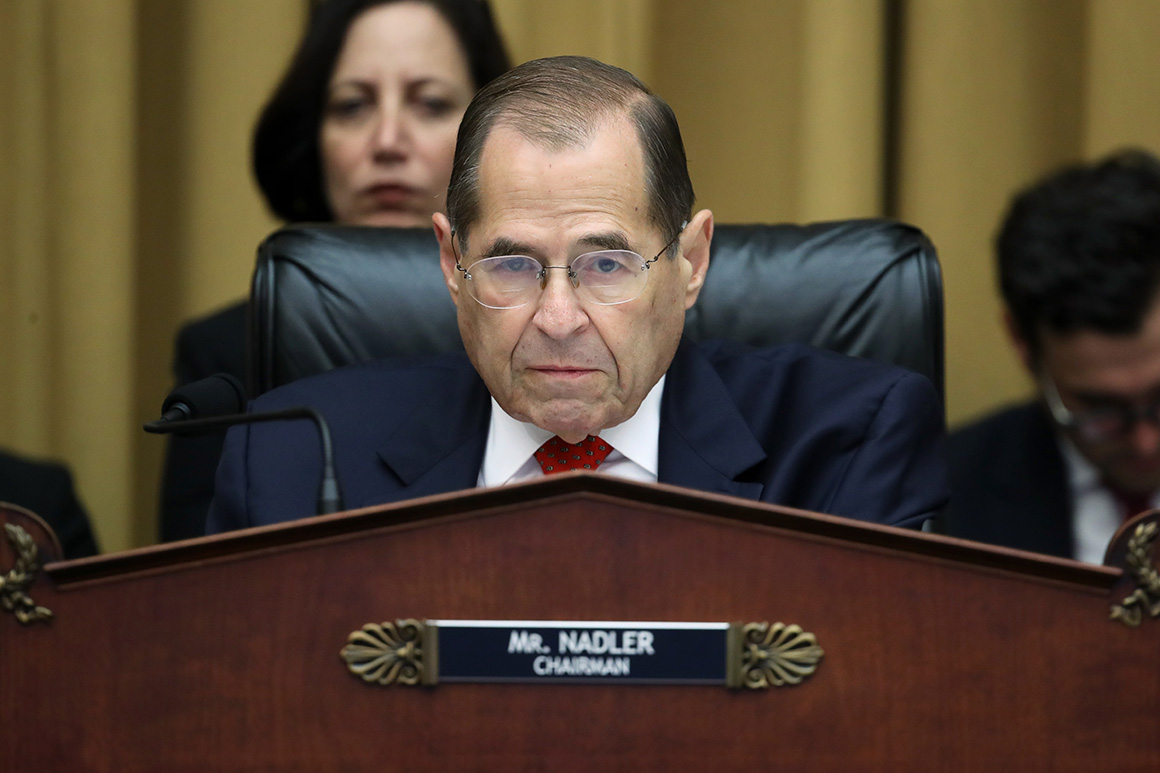 “That call was part of a concerted effort by the President, and by his men, to solicit a personal advantage in the next election—this time, in the form of an investigation of his political adversaries by a foreign government.

“To obtain that private, political advantage, President Trump withheld both an official White House meeting from the newly elected president of a fragile democracy and vital military aid from a vulnerable ally.

“When Congress found out about this scheme and began to investigate, President Trump took extraordinary and unprecedented steps to cover up his efforts and to withhold evidence from the investigators.

“And when witnesses disobeyed him—when career professionals came forward and told us the truth—he attacked them viciously, calling them traitors and liars, promising that they will ‘go through some things.’

“Of course, this is not the first time that President Trump has engaged in this pattern of conduct.

“When his own Department of Justice tried to uncover the extent to which a foreign government had broken our laws, President Trump took extraordinary and unprecedented steps to obstruct the investigation, including ignoring subpoenas, ordering the creation of false records, and publicly attacking and intimidating witnesses.

“Then, as now, this Administration’s level of obstruction is without precedent.

“No other president has vowed to ‘fight all of the subpoenas,’ as President Trump has promised. In the 1974 impeachment proceedings, President Nixon produced dozens of recordings. In 1998, President Clinton physically gave his blood. President Trump, by contrast, has refused to produce a single document and directed every witness not to testify.

“Those are the facts before us.

“The impeachment inquiry has moved back to the House Judiciary Committee—and as we begin our review of these facts, the President’s pattern of behavior becomes clear:

“President Trump welcomed foreign interference in the 2016 election. He demanded it for the 2020 election. In both cases, he got caught. And in both cases, he did everything in his power to prevent the American people from learning the truth about his conduct.

“On July 24, the Special Counsel testified before this Committee. He implored us to see the nature of the threat to our country: ‘Over the course of my career, I have seen a number of challenges to our democracy. The Russian government’s effort to interfere in our elections is among the most serious . . . . [t]his deserves the attention of every American.’

“Ignoring that warning, President Trump called the Ukrainian President the very next day to ask him to investigate the President’s political opponent.

“As we exercise our responsibility to determine whether this pattern of behavior constitutes an impeachable offense, it is important to place President Trump’s conduct into historical context.

“Since the founding of our country, the House of Representatives has impeached only two presidents. A third was on his way to impeachment when he resigned.

“But never before, in the history of the republic, have we been forced to consider the conduct of a president who appears to have solicited personal, political favors from a foreign government.

“Never before has a president engaged in a course of conduct that included all of the acts that most concerned the Framers.

“The patriots who founded our country were not fearful men. They fought a war. They witnessed terrible violence. They overthrew a king.

“But as they met to frame our Constitution, those patriots still feared one threat above all: foreign interference in our elections.

“They had just deposed a tyrant. They were deeply worried that we would lose our newfound liberty, not through a war—if a foreign army were to invade, we would see that coming—but through corruption from within.

“And in the early years of the republic, they asked us—each of us—to be vigilant to that threat.

“Washington warned us ‘to be constantly awake, since history and experience prove that foreign influence is one of the most baneful foes of republican government.’

“Adams wrote to Jefferson: ‘As often as Elections happen, the danger of foreign influence recurs.’

“Hamilton’s warning was more specific and more dire. In the Federalist Papers, he wrote that the ‘most deadly adversaries of republican government’ would almost certainly attempt to ‘rais[e] a creature of their own to the chief magistracy of the Union.’

“In short, the Founders warned us that we should expect our foreign adversaries to target our elections, and that we will find ourselves in grave danger if the president willingly opens the door to their influence.

“What kind of president would do that? How will we know if the president has betrayed his country in this manner for petty, personal gain?

“Hamilton had a response for that as well. He wrote:

“‘When a man unprincipled in private life, desperate in his fortune, bold in his temper, possessed of considerable talents . . . known to have scoffed in private at the principles of liberty—when such a man is seen to mount the hobby horse of popularity—to join the cry of danger to liberty—to take every opportunity of embarrassing the General Government & bringing it under suspicion . . . [i]t may justly be suspected that his object is to throw things into confusion that he may “ride the storm and direct the whirlwind.’

“Ladies and gentlemen, the storm in which we find ourselves today was set in motion by President Trump. I do not wish this moment on the country. But we have each taken an oath to protect the Constitution, and the facts before us are clear.

“President Trump did not merely seek to benefit from foreign interference in our elections.

“He directly and explicitly invited foreign interference in our elections. He used the powers of his office to try to make it happen. He sent his agents to make clear that this what he wanted. He was willing to compromise our security and his office for personal, political gain.

“It does not matter that President Trump got caught and ultimately released the funds that Ukraine so desperately needed. It matters that he enlisted a foreign government to intervene in our elections in the first place.

“It does not matter that President Trump felt that these investigations were unfair to him. It matters that he used his office, not merely to defend himself, but to obstruct investigators at every turn.

“We are all aware that the next election is looming—but we cannot wait for the election to address the present crisis. The integrity of that election is the very thing at stake.

“The President has shown us his pattern of conduct. If we do not act to hold him in check—now—President Trump will almost certainly try again to solicit interference in the election for his personal, political benefit.

“Today, we will begin our conversation where we should, with the text of the Constitution.

“We are empowered to recommend the impeachment of President Trump to the House if we find that he has committed treason, bribery, or other high crimes and misdemeanors.

“Our witness panel will help us to guide that conversation.

“In a few days, we will reconvene and hear from the committees that worked to uncover the facts before us. And when we apply the Constitution to those facts, if it is true that President Trump has committed an impeachable offense—or impeachable offenses—then we must move swiftly to do our duty and charge him accordingly.

“I thank the witnesses for being here today.”