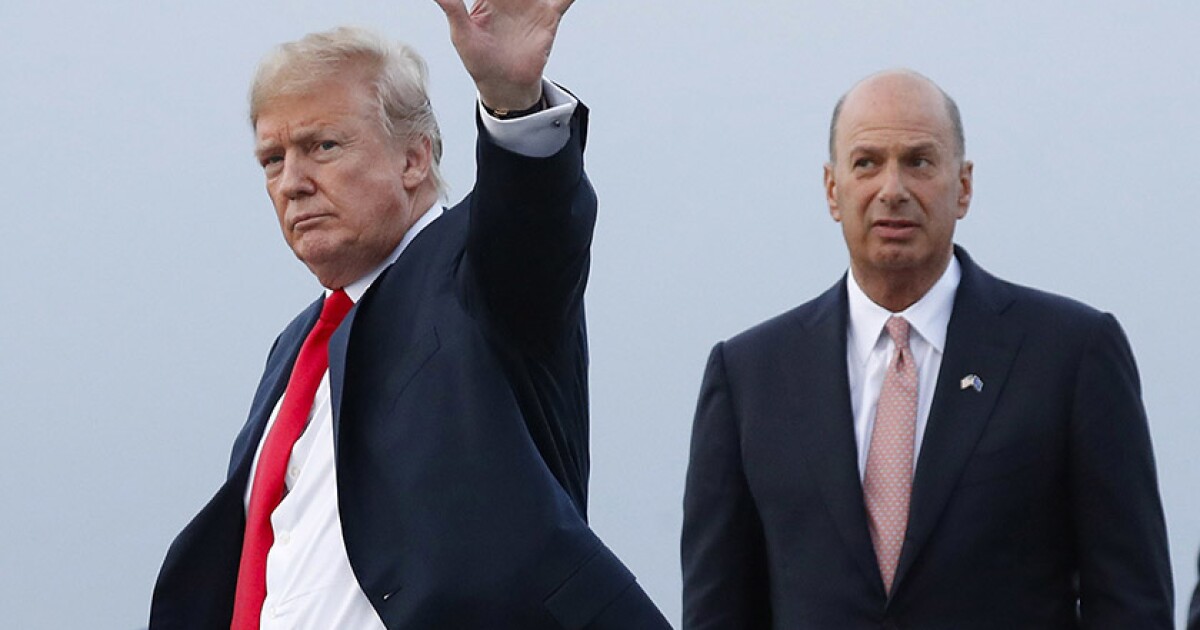 What Will Sondland Say?

When Gordon Sondland enters the ornate House hearing room for televised testimony this morning, Republicans and Democrats will be looking for a make-or-break moment in the impeachment inquiry into President Trump — even as serious questions surround Sondland’s credibility.

The hotelier-turned-U.S. ambassador to the European Union has emerged as a pivotal link between the president and a shadow foreign policy led by Rudolph W. Giuliani, who was urging the Ukrainians to conduct investigations into former Vice President Joe Biden and his son as military aid to Ukraine was being held up.

Sondland’s appearance follows more than 11 hours of firsthand testimony from White House aides who provided damaging new details about Trump’s efforts. Republicans largely responded by trying to discredit the witnesses rather than dispute their accounts.

Meanwhile, more than $35 million of the roughly $400 million in aid to Ukraine that Trump delayed has not been released to the country, according to a Pentagon spending document obtained by The Times. It’s not clear why the money hasn’t been released, and members of Congress are demanding answers.

— The House has passed a short-term spending bill that would keep federal agencies running for a month in hopes that the additional time will help negotiators wrap up more than $1.4 trillion in unfinished appropriations bills. Next stop: the Senate. The deadline for Trump to sign it: midnight Thursday.

— The latest Democratic primary debate will get underway in Atlanta at 6 p.m. Pacific time. Here’s what to look out for.

Cracking Down on Fracking

In a victory for critics of California’s oil drilling industry, Gov. Gavin Newsom has blocked new approvals for hydraulic fracturing, pending a permit review by an independent panel of scientists, and also for steam-injected oil drilling, the method linked to a massive petroleum spill in Kern County this year.

But in L.A., environmentalists were less pleased as they urged Mayor Eric Garcetti not to build an $865-million gas-fired power plant in Utah, saying the plan conflicts with his own climate agenda. That facility would replace Intermountain Power Plant, L.A.’s largest source of power and the last coal plant serving Californians.

“I could give you a hundred reasons homelessness has become L.A. County’s most vexing challenge, from the gargantuan income gap to housing costs to the scourge of drugs and mental illness, but the biggest impediment to solving it may be this: Nobody is in charge.” That’s how columnist Steve Lopez begins his latest piece on the homelessness crisis. But he says there is a glimmer of hope.

Hollywood’s big unions and studios are getting ready to rumble, as film and TV contracts are set to expire next year. Netflix, on the other hand, is looking to hash out its own labor deals. The Los Gatos, Calif.-based streaming giant can do so because, unlike major competitors, it doesn’t belong to the Alliance of Motion Picture and Television Producers. That means writers, actors and directors could continue to work on Netflix shows even if they staged a walkout with alliance members.

On this date in 1975, if you were to head from the freeway into the Central California town of Coalinga, what you’d pass wouldn’t be an ordinary oil field. It would be a playful cartoon take on one — the Iron Zoo, locals called it — courtesy of Jean Dakessian, who transformed 46 pumping units into the likes of a cowboy on horseback, a pair of Peanuts friends and a derby-wearing turtle (he was the slowest pump, naturally). As the artist told The Times: “It’s a dull 12-mile drive from Interstate 5 through the oil fields to Coalinga. I dressed up the desolation.” See more of her creations.

— A federal judge in San Diego has ruled that the Trump administration was misapplying its so-called asylum ban to migrants who’d already been waiting in line when it took effect in July. The decision could give tens of thousands the chance to have their claims heard.

— Costa Mesa‘s outgoing police chief says he’s being forced out after he raised issues about the latest budget development process and what he considers the City Council’s “interference.”

— More than two years after the Las Vegas mass shooting, a Mira Loma woman who was paralyzed in the attack on a country music festival has died, authorities said, raising the death toll of the deadliest mass shooting in modern U.S. history to 59.

— The actions of a Santa Clara County prosecutor are under scrutiny after authorities say he used his 13-year-old daughter as bait to catch a man accused of molesting her.

— Saugus High School students returned to campus Tuesday for the first time since a gunman last week killed two classmates and injured three others. They were allowed to retrieve their things, but classes are canceled until Dec. 2.

— The Grammy nominations are coming out this morning. Our complete coverage is here.

— Horror movies are finally winning some respect. But what about Oscars?

— It took 25 years before Hollywood was ready for a movie about Harriet Tubman. “Harriet” screenwriter Gregory Allen Howard explains how it happened.

— Sterling K. Brown talks identity, success, fatherhood and how he told his mom he was ditching economics for acting.

— Everybody wants a piece of the Great White Way. But now that some of its top tickets belong to rock stars and the line between Broadway and Off-Broadway is blurring, what exactly is Broadway?

— Doctors are pressuring U.S. Customs and Border Protection to let them give flu shots to detained migrant children after several died of the virus in custody over the last year.

— Troll armies, a growth industry in the Philippines, may soon be coming to U.S. elections.

— Sweden has dropped its rape investigation of WikiLeaks founder Julian Assange, now in prison in Britain. The prosecutor said his accuser was credible but the passage of time had weakened the evidence.

— Two correctional officers responsible for guarding Jeffrey Epstein the night he killed himself have been charged with falsifying prison records.

— The just-finalized merger of the big newspaper chains Gannett and GateHouse Media sends a grim signal about the future of local news, columnist Michael Hiltzik writes.

— Workers at an electric bus company in L.A. have unionized, with the support of their Silicon Valley CEO. It’s a far cry from Tesla.

— Why are Californians with health coverage being hit with surprise fees padding their premiums? Because, columnist David Lazarus explains, the state’s insurance industry lobbied to ensure it can stick patients with at least some of their financial obligations.

— A year after his shocking arrest on fraud charges, Carlos Ghosn — the former head of the partnership between Nissan, Renault and Mitsubishi — is out to prove it’s all a conspiracy.

— If the NFL wants to expand beyond U.S. borders, it should look at Mexico before Europe, because the league is already there in spirit, columnist Dylan Hernandez writes.

— The three main horse racing organizations have announced the formation of the Thoroughbred Safety Coalition, in hopes of regaining public confidence in the sport after numerous horse deaths. But it won’t change much in California.

— Even though Brett Kavanaugh made it onto the Supreme Court, it’s important that truth tellers like Christine Blasey Ford, who says he assaulted her as a teen, not disappear from view, columnist Robin Abcarian writes.

— Author David L. Ulin once thought Angelyne represented everything he disliked about L.A. Now he considers her a true Los Angeles original.

— Scared children, most of them with disabilities, are being locked in isolation rooms across Illinois, and often it’s against the law. (Chicago Tribune/ProPublica)

— There are 114,000 homeless kids in New York City public schools. This is a day in the life of two of them. (New York Times)

For more than two decades, the Soviet submarine that would become known as the Scorpion was based out of Vladivostok during the height of the Cold War. Eventually, it would end up in Long Beach, docked next to the Queen Mary, as a tourist attraction — sitting there for nearly as long as it plied the Pacific. But in 2015, it closed after falling into such disrepair that it became infested with raccoons. Soon, it’s expected to be sold. Its buyer and destination? Unknown.