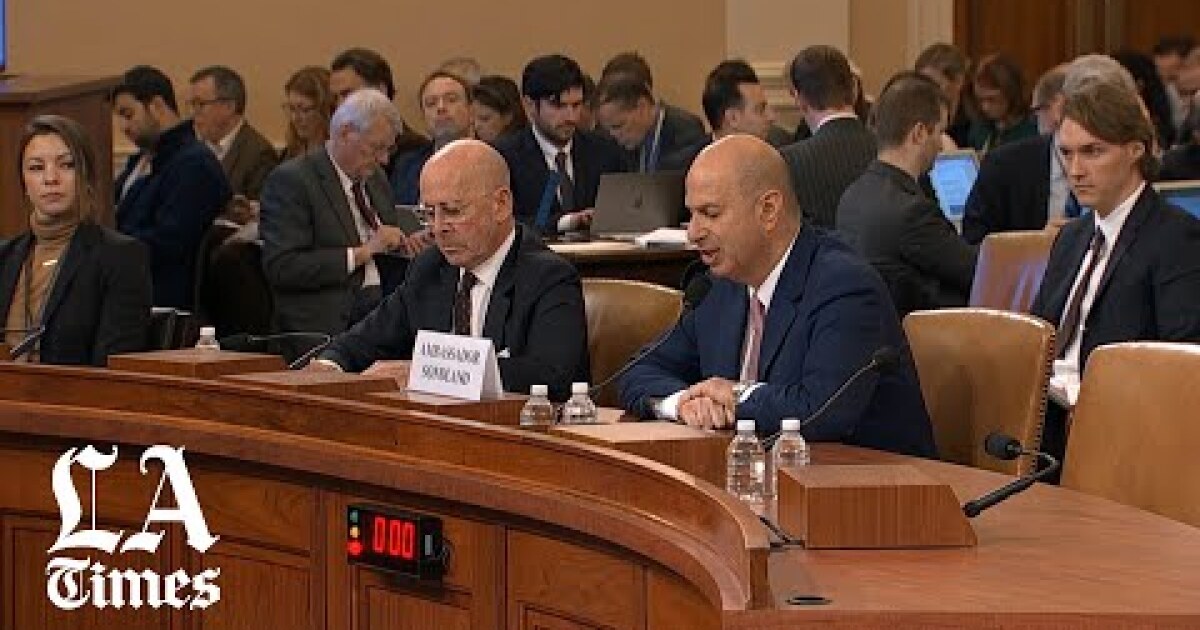 ‘We Followed the President’s Orders’

President Trump named Gordon Sondland as U.S. ambassador to the European Union after he had donated $1 million to Trump’s inauguration. On Wednesday, Sondland was faced with saving himself or Trump in the impeachment inquiry into the president. His testimony shattered several key White House denials.

Sondland said in his opening statement (read it here) that he and other senior administration officials had “followed the president’s orders” in pushing Ukraine to investigate Trump’s political foes. It was just part of Sondland’s firsthand account that implicated Vice President Mike Pence, Acting White House Chief of Staff Mick Mulvaney and Secretary of State Michael R. Pompeo.

Though Trump and his allies have staunchly denied that the president and his private attorney, Rudolph W. Giuliani, sought a “quid pro quo” to get Ukraine to investigate Democrats in exchange for a White House meeting, Sondland said he believed it was exactly that. “Was there a quid pro quo?” he asked. “The answer is yes.” But Sondland offered only tentative evidence to a second part of the Democrats’ case: that the White House had frozen $391 million in security aid in July as additional leverage.

Trump’s response to the testimony of Sondland, who says he had spoken with Trump about 20 times, was to declare victory and say, “I don’t know him very well. I have not spoken to him much.”

More From the Impeachment Inquiry

— Fiona Hill, Trump’s former Russia advisor, and David Holmes, a U.S. Embassy official in Ukraine, are set to give public testimony today. Behind closed doors, Hill has told congressional investigators that John Bolton, the president’s former national security advisor, called Giuliani a “hand grenade who is going to blow everybody up.”

For all the attention paid to the impeachment inquiry this week, the topic didn’t come up much during the Democratic presidential debate last night. Instead, the hopefuls clashed over issues of race and political leadership. Both newly ascendant candidate Pete Buttigieg, the mayor of South Bend, Ind., and former Vice President Joe Biden found themselves in the hot seat. And the candidates vowed to stand up for human rights and take a less friendly approach to autocratic regimes than Trump has. Here are five more takeaways from the debate.

The Cartel War Over Avocados

Homicides are at an all-time high in Mexico, which has long been home to powerful and violent narcotics traffickers. Yet much of the killing today has little to do with drugs. Faced with a government war on drugs, organized crime has diversified — into controlling gasoline pipelines, gold mines and the prices at supermarkets. One of the biggest targets: Mexico’s multibillion-dollar avocado industry, headquartered in Michoacan state, where picking “green gold” has become a dangerous occupation.

On this date in 1985, William Gates cooked breakfast on a makeshift stove — a grill laid across an oil drum — for his homeless neighbors living in winter shacks in a downtown L.A. parking lot. The Times reported at the time: “Their shantytown, hidden from view by walls and closed to most visitors, is the envy of Skid Row. The eight ‘houses’ have walls on all sides and plywood roofs, with bedding and furniture collected over the last five months. The best have raised floors to keep belongings dry in the rain.” See more photos here, and read the full story here.

— California’s budget could see a record $26 billion in cash reserves by the summer of 2021, with more than a quarter of that amount an unrestricted surplus that lawmakers could use at their discretion, analysts say — a promising sign for the state’s economy.

— California has a new weapon in its war with the Trump administration over auto emissions: a boycott of car makers that have chosen the wrong side.

— The South Los Angeles Area Planning Commission has voted to reject a plan for 577 apartments near a Crenshaw Boulevard light-rail station, the latest flare-up in a debate over gentrification and the benefits of market-rate housing.

— After a weekend of record-breaking high temperatures, Angelenos broke out jackets and umbrellas as rain and even snow fell on Southern California yesterday. Up north, hundreds of thousands of people saw their power shut off as dry weather and strong winds rolled through.

— As recently as 18 months ago, much of the world had never heard of Billie Eilish, Lizzo or Lil Nas X. Now they’re all nominated for Grammy Awards, and each was bestowed with more nods than established superstars such as Taylor Swift, Beyoncé and Lady Gaga.

— More Grammy nominations: Some big snubs and surprises, and the full list of nominees.

— Apple has abruptly canceled tonight’s planned world premiere at AFI Fest of its period drama “The Banker” over unspecified concerns about the film, leaving the festival scrambling.

— For all the ridicule South Dakota is receiving for its new antidrug slogan — “Meth. We’re On It.” — experts in substance abuse say the most important story is being missed: It’s the only state that classifies ingestion of illegal substances as a felony, an approach that has widely been shown to make it harder to break the cycle of addiction.

— Former Baltimore Mayor Catherine Pugh was indicted on fraud and tax evasion charges, accused of using sales of her self-published “Healthy Holly” children’s books to fund straw donations to her campaign and renovate her house.

— Israel looks as if it’s headed for an unprecedented third election in less than a year, now that neither Prime Minister Benjamin Netanyahu nor former army chief Benny Gantz has managed to form a coalition government.

— Once Ring doorbell owners give police access to video captured by their cameras, police can keep it indefinitely and share it, an executive at the Santa Monica-based tech company told a senator — underscoring privacy and civil liberties concerns.

— Kawhi Leonard and Paul George combined for 42 points in their first game together for the Clippers, as they rallied to edge the Boston Celtics 107 to 104 in overtime.

— There’s a new addition to the list of institutions that Sen. Bernie Sanders wants to shield from “corporate greed”: minor league baseball teams.

— Charles Barkley is sorry for suggesting he wanted to beat up a female reporter.

— Californians care less about the issues in the 2020 election, columnist George Skelton writes. They want a candidate who can beat Trump.

— Math probably scares your child’s elementary school teacher, and that should frighten you.

— In future wars, new technologies may enable countries such as China and Russia, to carry out devastating attacks on U.S. military bases and logistics networks, even those located within the United States. (Foreign Policy)

— Many Americans are fascinated by the child-rearing practices of other countries, but those practices might be harder to import than they seem. (The Atlantic)

How do you get the blunt truth about pro basketball? Apparently, it takes a few blunts. At least that is the philosophy of the new video podcast “All the Smoke” on Showtime’s YouTube channel. From their studio in Santa Monica, former NBA players Matt Barnes and Stephen Jackson sit down, roll up and encourage their guests to let the stories flow.