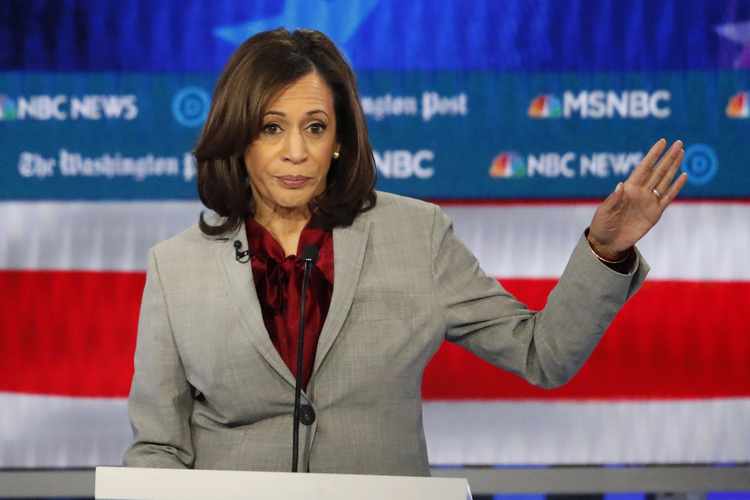 Unbridled ambition and aggression have their place in presidential politics – as the man in the Oval Office reminded the nation in 2016  — but in the case of California freshman Sen. Kamala Harris, they weren’t enough to overcome the lack of a  clear policy vision.

The candidate who threw some of the hardest punches on the debate stage ended her presidential bid after high hopes faded amid a string of underwhelming results. Her quest concluded with an open letter. Her campaign, Harris admitted Tuesday, is broke.

“My campaign for president simply doesn’t have the financial resources we need to continue,” she told supporters just 62 days before absentee ballots go out in the California mail.

But Harris saved one final jab for self-funding candidates: “I’m not a billionaire. I can’t fund my own campaign. And as the campaign has gone on, it’s become harder and harder to raise the money we need to compete.”

This fundraising failure was made all the more frustrating for Harris as she had qualified for the sixth presidential debate later this month in California but opted to let that homefield advantage go to waste. Another bitter pill came hours before the end when news broke that Tom Steyer – one of the billionaires she had in mind — qualified for the contest that Harris will miss.

She supported “Medicare for All” before backing away from that health care plan. She embraced her reputation as the tough-on-crime former attorney general of California one moment, then distanced herself from her law enforcement record the next. Most of all, she just fought.

“I do not believe you are a racist,” Harris told former Vice President Joe Biden before implying exactly that while scorching him at the Miami debate over his opposition to school busing laws in the 1970s.

“I think that it’s unfortunate that we have someone on this stage that is attempting to be the Democratic nominee for president, who during the Obama administration spent four years full time on Fox News criticizing President Obama,” Harris told Hawaii Rep. Tulsi Gabbard at the Georgia debate.

All three of those candidates weathered her attacks. Each now survives Harris, who never found a consistent message and never gained traction in the polls.

This aimlessness bred resentment within her own ranks, indignation manifested in a resignation letter from her state operations director. “Because we have refused to confront our mistakes, foster an environment of critical thinking and honest feedback, or trust the expertise of talented staff,” wrote Kelly Mehlenbacher, “we find ourselves making the same unforced errors over and over.”

That staffer now works for another one of the billionaire candidates, former New York Mayor Michael Bloomberg.

Before the end, the Harris campaign held a conference call with analysts and operatives and donors. She needed a new message. They did not deliver one before “Saturday Night Live” started lampooning her as “America’s fun aunt,” or as comedian Maya Rudolph quipped, “a funt.”

“The funt is back: America’s fun aunt. I’m also America’s cool aunt,” Rudolph’s version of Harris said in a subsequent skit. “… I’m not going to worry about the polling numbers. I’m just going to have fun and see if I can get some viral moments. Mama needs a GIF.”

Her campaign made its own GIFs, but when the ride was all over it was evident that the highwater mark of Harris’ campaign was its much ballyhooed launch. She ended on a high note as well, at least to hear her rival candidates – the ones she attacked — tell it. Buttigieg said he was “grateful for her leadership.” Gabbard passed along “best wishes.” Before praising her intellect and tenacity, Biden admitted that the breaking news of her exit brought him “mixed emotions.”

The remaining contenders are now free to pick among the wreckage of her campaign. They won’t find that much. According to the RealClearPolitics polling average, Harris was strongest in South Carolina with 6.3% support and in California with 8.7%. In those states, her demise may provide an opportunity for Biden to solidify his strong support in African American communities. Perhaps most significant, though, every candidate can breathe easier knowing they’re free from the threat of her haymakers.

Her fight was not supposed to end this way. She started her campaign on Martin Luther King Jr. Day, telling “Good Morning America,” “I am running for president.” And it was, she said, “a moment in time where I feel a sense of responsibility to stand up and fight for the best of who we are.” But on Monday, she said, “No mas.”