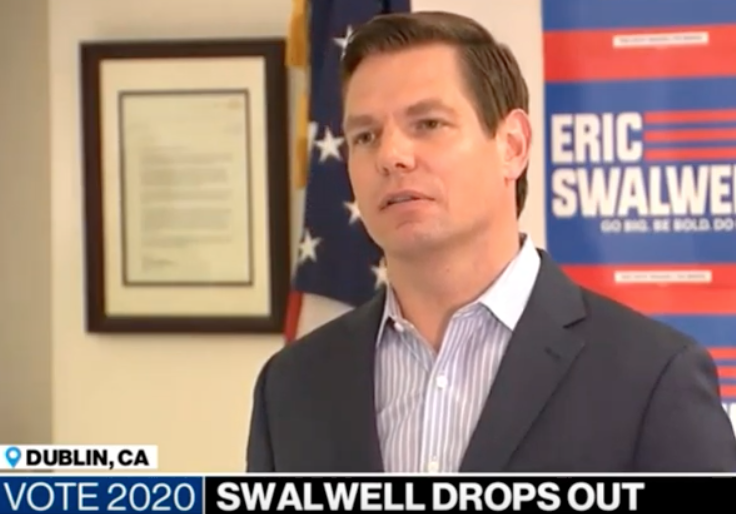 Rep. Eric Swalwell (D., Calif.) on Tuesday claimed he had not yet determined whether to support the impeachment of Donald Trump, despite calling for the president’s ouster multiple times in June.

Swalwell, who has frequently appeared on CNN and MSNBC to discuss impeachment, was approached on Capitol Hill by CNN reporter Manu Raju, who asked him whether he had made a decision about impeaching Trump.

Question: “You haven’t made the decision yet about whether the President should be impeached?”@RepSwalwell: “No.” pic.twitter.com/5SNbROwZKk

“No,” Swalwell said. “I think that it’s important that we reserve judgment. The report has powerful overwhelming evidence and again this is one of the largest investigations ever in America that relied on the fewest amount of documents.”

Swalwell echoed House Intelligence Committee chairman Adam Schiff (D., Calif.), who told reporters earlier in the afternoon that he was “going to continue to reserve judgment.” He later added that he was “gravely concerned that if we merely accept this that we invite not only further corruption of our elections by this president, but we also invite it of the next president.”

Swalwell, a member of the House Intelligence Committee and an unsuccessful 2020 presidential candidate, broke rank with Democratic leadership in June after Trump said, “there’s nothing wrong with listening” to opposition research from foreign nations. The comment received backlash from Democratic presidential hopefuls, including Swalwell.

“Congress has no choice: we must begin an impeachment inquiry against @realDonaldTrump,” Swalwell tweeted. “He has invited the Russians to again sabotage our elections. And he has obstructed (& obstructs) justice. Time to be held accountable. Our democracy is worth saving.”

Congress has no choice: we must begin an impeachment inquiry against @realDonaldTrump. He has invited the Russians to again sabotage our elections. And he has obstructed (& obstructs) justice. Time to be held accountable. Our democracy is worth saving.

Swalwell also tweeted out a clip of one of his MSNBC interviews less than two weeks later saying he has “had enough” of Trump’s “mass obstruction spree.” The California Congressman confirmed this position on impeachment as recently as November when he boasted on Twitter about his longtime support for impeachment.

“I called for impeachment the day @realDonaldTrump told @GStephanopoulos he would again take help from a foreign government to win an election. That was June,” he said.

Trump is not the only person Swalwell has said should be impeached. He has repeatedly called for Attorney General William Barr and Treasury Secretary Steve Mnuchin to be removed from office, claiming they were “hiding evidence we could need for the impeachment of the President.”