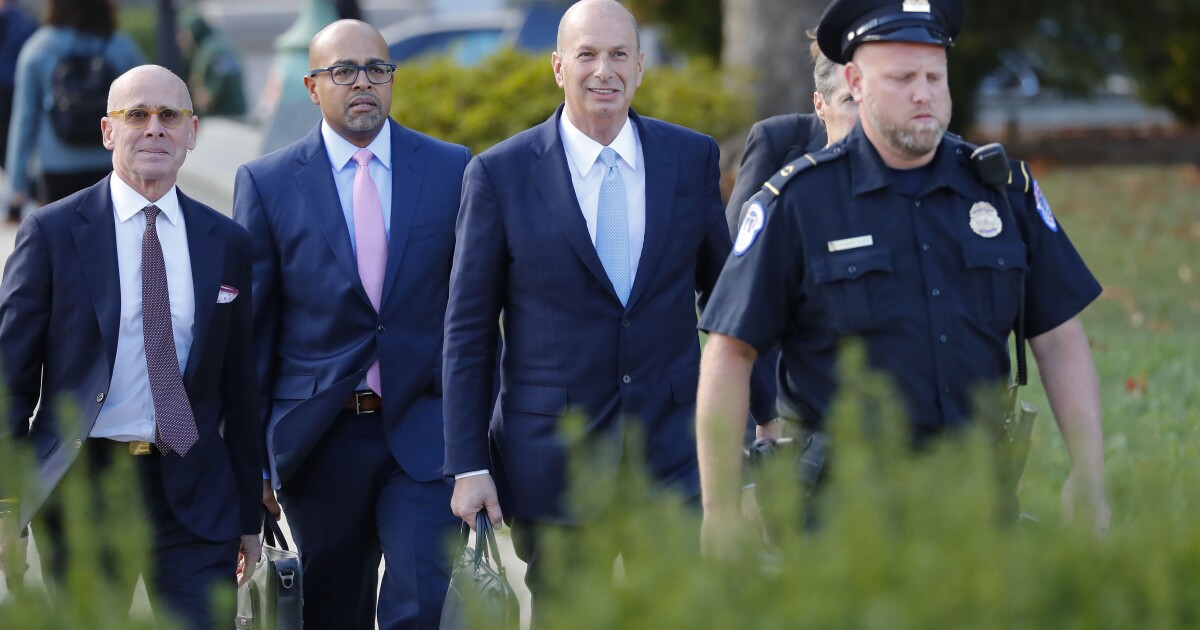 When Gordon Sondland enters the ornate House hearing room for televised testimony on Wednesday morning, he’ll be something of a jump ball in the contest between Republicans and Democrats to control narratives of the Ukraine case — a witness who could provide crucial testimony for either side, but whom both regard with suspicion.

A former big-dollar donor to Republicans rewarded with a plum ambassadorship, Sondland says he told the Ukrainians that U.S. foreign aid and a White House meeting with the president was contingent on conducting investigations into the Biden family.

And unlike other witnesses in the impeachment case, Sondland had direct conversations with President Trump about relations with Ukraine, making him a key witness.

But Sondland, the ambassador to the European Union, has already had to change the story he presented to impeachment investigators – the result of reading other witnesses’ opening statements that he said had “refreshed [his] recollection.”

That has made Sondland potentially not only one of the most important witnesses, but also one of the least credible — a perilous combination. His testimony could bolster the Democratic case or give Republicans an opening to undercut it.

“This impeachment inquiry will come down to [Wednesday], regardless of which side you’re on, pro-impeachment or not,” Republican Rep. Mark Meadows of North Carolina said Tuesday. “His interactions were probably the ones that were closest to the president.”

Neither party is ready in advance to declare Sondland untrustworthy: Both hope his testimony could help their side. That could change significantly based on what he says publicly. Lawmakers in both parties are prepping exacting questions.

A central issue in the impeachment inquiry is the extent to which Trump knowingly was involved in efforts to pressure the Ukrainians to investigate Biden and other Democrats.

Sondland’s testimony is key on that point. If he strengthens the link to Trump and comes across as trustworthy, public support for the impeachment inquiry could increase. Conversely, if doubts linger around his truthfulness, Democrats will have a hard time resting their case upon his words.

For undecided lawmakers — and members of the public — a first-person account could be decisive.

“The closer you get to firsthand knowledge of what happened, it removes any kind of discussion that there wasn’t [any] using [of] American power to extract something from the Ukraine,” said Rep. Francis Rooney (R-Fla.), who has emerged as one of the few Republicans who is open to the idea of supporting the impeachment effort.

Sondland will be testifying under oath, meaning he could be subject to perjury charges if he is found to be lying to Congress. And he won’t have to stretch too far back in history to find evidence that Congress — and prosecutors — take the offense seriously.

Sondland told lawmakers in a sworn statement after his closed-door deposition that during a Sept. 1 meeting with a top advisor to the Ukrainian president, he delivered a dire message: If President Volodymyr Zelensky didn’t publicly promise an investigation, military aid and a pivotal White House meeting would not materialize. He called it an “anti-corruption statement.”

Lt. Col. Alexander Vindman, a National Security Council official, told lawmakers in a public hearing Tuesday that Sondland began to deliver a similar warning more than a month earlier. At a July meeting at the White House, Sondland started to tell Ukrainian officials that they had to deliver on the investigations in order to get a White House meeting with Trump, Vindman said.

After the meeting, “I stated to Ambassador Sondland that this was inappropriate and had nothing to do with national security,” Vindman said, referring to the effort to link a demand for investigations to Trump’s official conduct.

Sondland indicated during his closed-door deposition that he didn’t recall much from the July 10 meeting and didn’t recall saying much at all.

Sondland repeatedly told colleagues that in his meetings with the Ukrainians, he was directly representing the president’s views and was in contact with Trump. Many witnesses also place him as a direct and frequent link between Trump and a shadow foreign policy on Ukraine being pursued by the president’s lawyer, Rudolph W. Giuliani.

Sondland “related to me he was acting — he was discussing these matters with the president,” former National Security Council official Tim Morrison testified. Each time he checked to see if Sondland actually had spoken with Trump, Morrison said, Sondland’s claim checked out.

Morrison recalled discussing concerns about Sondland with Fiona Hill, his predecessor at the NSC.

“Among the discussions I had with Dr. Hill were about Ambassador Sondland. And I think she might have coined it ‘the Gordon problem,’” Morrison said. “I decided to keep track of what Ambassador Sondland was doing. I didn’t always act on things Gordon suggested, that he believed were important.”

Democrats say it will be up to the public to determine Sondland’s trustworthiness.

“I’ll hold judgment on his credibility because this is a time to test evidence,” said Rep. Eric Swalwell (D-Dublin), a House Intelligence Committee member. It’s common for witnesses to adjust their testimony during an investigation, Swalwell said. “He has shown a willingness to evolve, and he gave one version of events in his deposition and after other witnesses testified, amended his version.”

Some members of the committee defended Sondland, who often said during his closed-door deposition that he didn’t remember events described by others.

“It is interesting that Sondland’s testimony in the deposition was perhaps not complete. What we don’t have evidence of is of him outright lying, right?” said Himes. “The important thing here is there’s no reason to believe that when Gordon Sondland makes a statement, he’s lying.”

Republicans are likewise holding off on attacking the credibility of the former hotel industry executive, but warn that he’ll face questions about the changes to his story.

Sondland made statements “in the addendum that he didn’t state during his deposition,” said Rep. Lee Zeldin (R-N.Y.). “So he’s going to be facing questions off of that.”

He will also face significant questions about a July 26 cellphone call he placed to the president from a Kyiv restaurant. The call only became public last week when William B. Taylor Jr., the acting U.S. ambassador in Ukraine, told lawmakers that one of his staff members, David Holmes, overheard the call.

Holmes testified that he heard Trump ask Sondland about the status of the investigations.

That call, and Trump’s apparent reference to “investigations,” undercuts claims from Republicans that Trump was worried generally about corruption in Ukraine, not about any specific case, and that the president did not link the investigations to the hold on military aid.

Holmes “added some significant new facts that get it closer to a firsthand deal. That’s important,” Rooney said. “We’ll see what Sondland says for his side of that conversation.”

Trump said last week that he did not remember the July 26 call.

Holmes testified he was shocked that Sondland could call Trump directly from a cellphone in Kyiv, a city that security experts say is loaded with Russian intelligence equipment. That sort of ready access to the president gives him added weight as a witness, Democrats say.

“Sondland is important,” said Rep. Raja Krishnamoorthi (D-Ill.), a member of the House Intelligence Committee. “As you can tell, he talked to the president very frequently – he could even call him up on a cellphone apparently from a bar or restaurant in the middle of Kyiv.”