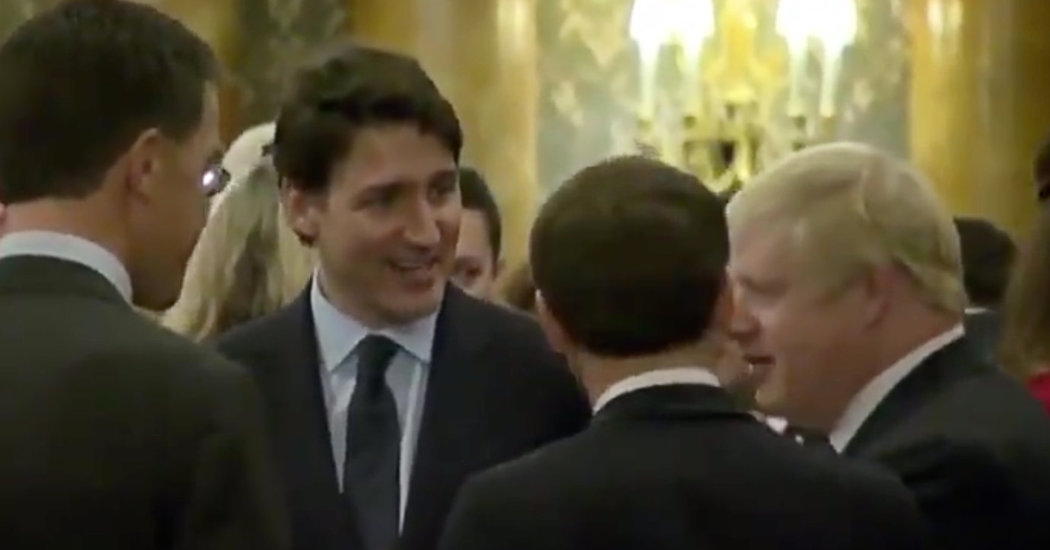 LONDON — It was a NATO anniversary celebration designed specifically to avoid unwanted disruptions.

But those drama-free plans were upended Tuesday when President Emmanuel Macron of France aggressively challenged President Trump during a televised appearance. And early Wednesday brought another surprise, as a brief video surfaced that showed grinning world leaders at a Buckingham Palace reception apparently commiserating about Mr. Trump’s unorthodox ways.

In the video, which was posted online by the Canadian Broadcasting Corporation, Prime Minister Justin Trudeau of Canada seems to be venting about Mr. Trump’s behavior during the first day of the two-day NATO summit meeting. Mr. Trump spoke to reporters for more than two hours in total on Tuesday, which appeared to astonish Mr. Trudeau.

“He was late because he takes a 40-minute press conference at the top,” Mr. Trudeau says to a small group that includes Mr. Macron and the British prime minister, Boris Johnson, among others. Mr. Trudeau does not mention Mr. Trump by name during the exchange, at which he appears to be discussing the day’s bilateral meetings.

“You just watch his team’s jaws drop to the floor,” Mr. Trudeau says at another point. Mr. Macron is also seen participating animatedly in the conversation, but his comments cannot be heard. Mr. Johnson is seen smiling. None of the world leaders seem to realize the conversation is being recorded.

Mr. Trump was put on the defensive Tuesday by Mr. Macron, who during a tense 45-minute appearance aggressively challenged the American president’s vision for NATO and his handling of a military conflict involving Turkey. For Mr. Trump, it was a rare face-to-face meeting with another world leader in which he was not driving the conversation.

Mr. Trump has long bridled at the idea of other world leaders poking fun at the United States. “The world is laughing at us,” he said frequently during his 2016 presidential campaign, criticizing the leadership of President Barack Obama.

In June 2017, when he announced that the United States would withdraw from the Paris climate agreement, Mr. Trump said that “we don’t want other leaders and other countries laughing at us any more. And they won’t be. They won’t be.”

In 2018, after laughter broke out at the United Nations General Assembly when Mr. Trump claimed his administration had “accomplished more than almost any administration in the history of our country,” the president insisted that he was not the target.

“They weren’t laughing at me, they were laughing with me,” he said.

There was no immediate reaction to the video from Mr. Trump, who had not tweeted in hours when it was posted.

On Wednesday, he was scheduled to meet with Chancellor Angela Merkel of Germany, who was not among the leaders seen in the video. He was also scheduled to hold meetings with the prime minsters of Denmark and Italy, and to participate in a working lunch with representatives of Estonia, Greece, Latvia, Poland, Romania, Lithuania, Bulgaria and Britain.

Mr. Trump was also expected to hold a news conference before his departure.