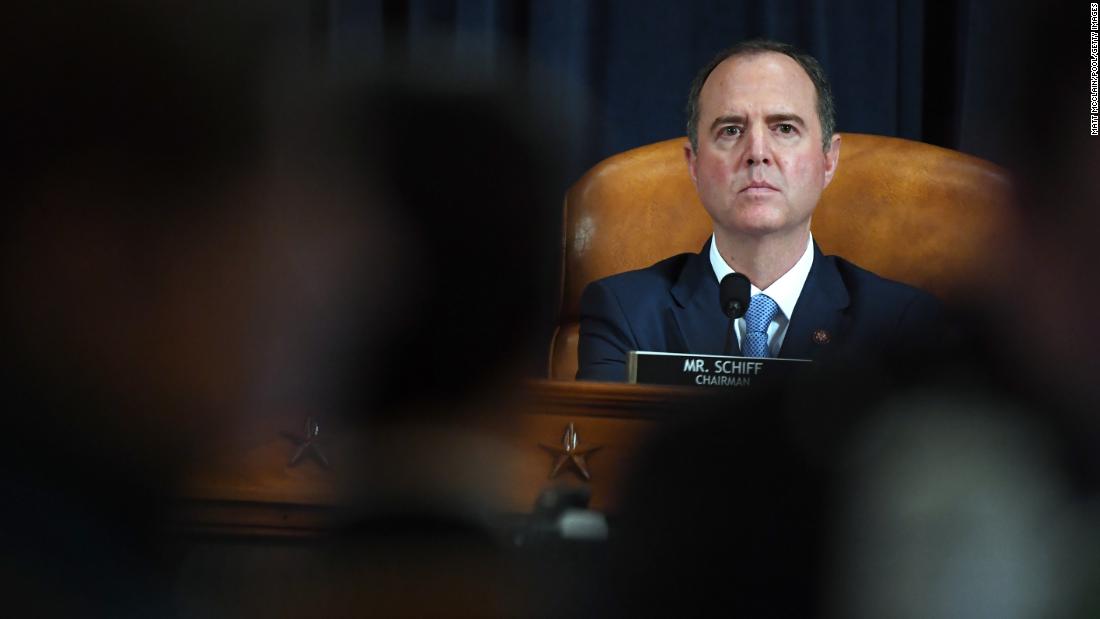 The vote will send the report to the House Judiciary Committee as that panel considers moving forward on articles of impeachment.

The 300-page report from the House Intelligence Committee sets the stage for the impeachment of a US president for just the third time in history. The report stops short of outright recommending impeachment, with House Intelligence Chairman Adam Schiff and the other committee chairs leading the inquiry said that was a decision Congress ultimately has to make.

But the report makes clear that’s where Democrats are heading.

“I’m going to reserve any kind of a public judgment on that until I have a chance to consult with my colleagues, with our leadership,” Schiff, a California Democrat, said when asked if there was evidence for impeachment. “As you can tell, I am gravely concerned that if we merely accept this that we invite not only further corruption of our elections by this President, but we also invite it of the next president.”

The report release kicks off what’s poised to be a frenzied month in the House, with Democrats on track to potentially vote on impeaching Trump by Christmas. After Tuesday’s vote, the impeachment proceedings shift to the Judiciary Committee, which will hold hearings beginning Wednesday and would draft articles of impeachment against Trump. Republican amendments to the Intelligence Committee report were rejected along party lines.

The report is broken down into two sections, one on Ukraine and the other on obstruction of Congress — both of which are expected to be separate articles of impeachment.

Democrats alleged that the July 25 call between Trump and Ukrainian President Volodymyr Zelensky — in which Trump asked Zelensky to investigate former Vice President Joe Biden — was the “dramatic crescendo” of a months-long campaign driven by the President that involved a number of senior officials, including Vice President Mike Pence, Secretary of State Mike Pompeo and acting chief of staff Mick Mulvaney.

“The President engaged in this course of conduct for the benefit of his own presidential reelection, to harm the election prospects of a political rival, and to influence our nation’s upcoming presidential election to his advantage,” the report says. “In doing so, the President placed his own personal and political interests above the national interests of the United States, sought to undermine the integrity of the US presidential election process, and endangered US national security.”

Democrats charged that the White House’s obstruction of their impeachment investigation was an “unprecedented campaign,” detailing the numerous subpoenas that were defied over the two-month investigation.

“Indeed, it would be hard to imagine a stronger or more complete case of obstruction than that demonstrated by the President since the inquiry began,” the report says.

Schiff said that the report does not answer every question Democrats have investigated, in part, he argued, because of the White House stonewalling. But he argued there was a “grave risk to the country with waiting until we have every last fact, when we already know enough about the President’s misconduct to make a responsible judgment about whether we think that’s compatible with the office of the President.”

House Speaker Nancy Pelosi told CNN Tuesday evening that she had not yet made a decision on impeachment, saying she’s waiting to see the hearings in Judiciary starting Wednesday and that she would look at the report more closely because she just arrived back in the US after a congressional trip.

Pelosi told Democrats privately Tuesday evening that she would confer with the chairs of her relevant committees before next steps are decided, according to multiple sources. She would not commit to any timeline even as Democrats expect the President to be impeached by Christmas.

“At the end of a one-sided sham process, Chairman Schiff and the Democrats utterly failed to produce any evidence of wrongdoing by President Trump,” White House press secretary Stephanie Grisham said in a statement. “This report reflects nothing more than their frustrations. Chairman Schiff’s report reads like the ramblings of a basement blogger straining to prove something when there is evidence of nothing.”

Georgia Rep. Doug Collins, the top Republican on the House Judiciary Committee, criticized Schiff for planning to send his counsel, Daniel Goldman, to present the report before the committee.

The Democratic report is based largely on the 17 witness interviews that were conducted over a two-month investigation that was sparked by an anonymous whistleblower complaint alleging Trump solicited foreign help with his 2020 reelection campaign.

The main outlines of the story have been well documented in the two weeks of public testimony with 12 witnesses, in which multiple officials detailed an effort spearheaded by the President’s personal attorney Rudy Giuliani to oust then-US Ambassador to Ukraine Marie Yovanovitch and then push Kiev to announce investigations into the President’s political rivals.
But there are nuggets in the report that were previously unknown — most notably a batch of phone logs that Democrats say were obtained by subpoenaing third-party phone records.

The Democrats’ narrative begins with Trump recalling Yovanovitch in April. This wasn’t a one-off incident, the report argues, but rather a step Trump took so he could install his own appointees to subvert US policy on Ukraine.

Democrats accused Trump’s allies of coordinating with conservative journalist John Solomon to peddle “false narratives” about Yovanovitch as part of his multi-pronged pressure campaign. The House Intelligence Committee report says Rep. Devin Nunes of California, the top Republican on the panel, was linked to this scheme, based on the phone records they obtained.

The call logs also spur new questions, such as why Giuliani made several phone calls to the Office of Management and Budget and the White House in April, as the campaign against Yovanovitch was in full swing.

The report did not explicitly say how Democrats obtained these call logs, which are labeled as coming from AT&T, which owns CNN, and Verizon document productions. But Rep. Eric Swalwell, a California Democrat who sits on the committee, told CNN on Tuesday that the panel “subpoenaed outside third-party phone records.”

“Like all companies, we are required by law to provide information to government and law enforcement agencies. In all cases, we ensure that requests for assistance are valid and that we act in compliance with the law,” said Jim Greer, a spokesman for AT&T.

Asked about Nunes’ involvement, Schiff said: “There’s a lot more to learn about that and I don’t want to state that that is an unequivocal fact, but the allegations are deeply concerning.”

A Nunes spokesman did not respond to a request for comment. House Minority Leader Kevin McCarthy said Tuesday that he had “no concerns” with Nunes’ conversations. “I don’t have a problem with Devin talking to individuals,” McCarthy told reporters.

The report charges that the Ukraine pressure campaign extended far beyond Trump and Giuliani into the administration, singling out a number of senior administration officials — including the vice president — of having knowledge of or participating in the effort.

US Ambassador to the European Union Gordon Sondland testified that he told Pence during a trip to Warsaw in early September that the withholding of military aid had “become tied to the issue of investigations.” Democrats accused Pence of crafting a “carefully worded statement” during Sondland’s testimony, arguing that the statement did not address the actual claims Sondland made.

Marc Short, Pence’s chief of staff, responded that “Adam Schiff is a proven liar and this allegation further solidifies that well-earned reputation.”

Democrats argue that Pompeo, who listened into the July 25 call with Zelensky, was fully aware of Sondland’s efforts to “break the logjam” of military aid to Ukraine and that it was conditioned on Zelensky announcing his intent to move forward with investigations.

The release of the report kicks the impeachment proceedings into the Judiciary Committee, which will have its first hearing Wednesday and is expected to draft and consider articles of impeachment in the coming days.

But the Intelligence Committee said that its investigation is still ongoing, Schiff said, as impeachment investigators were unable to answer some key questions due to the Trump administration’s refusal to participate in the impeachment inquiry.

For instance, the Intelligence Committee was unable to determine if the resignation of former national security adviser John Bolton — on September 10, amid the first reports of a whistleblower complaint — was related to the Ukraine matter, because Bolton and his top deputy, Charles Kupperman, refused to testify for lawmakers, the report says.

The report also relies on the reporting of The New York Times to explain why Trump first learned of the existence of the whistleblower complaint, which the paper said came in a briefing with the White House counsel and a National Security Council lawyer in late August.

It also remains unclear why Trump lifted the hold on the military aid to Ukraine.

“Just like there was no official explanation for why the hold on Ukraine security assistance was implemented, numerous witnesses testified that they were not provided with a reason for why the hold was lifted on September 11,” the report says.

The obstruction of Congress section of the report lays out the historical precedent for including it as an article of impeachment, explaining that House Democrats have to demonstrate that the President made no good faith effort to cooperate with their probe — a standard they say has been clearly met.

Democrats also accused Trump of trying to intimidate witnesses and attacking those who responded to requests for subpoenas.

“President Trump engaged in a brazen effort to publicly attack and intimidate witnesses who came forward,” the report says, adding that the President’s efforts “deprived Congress and the public of additional evidence.”

In the report, Democrats allege that Trump’s pressure campaign against the Ukrainians persists, with Trump still exerting control over the Ukrainian leader through the US’s military and financial advantages.

“Although President Zelensky did not publicly announce the investigations that President Trump wanted, he remains under pressure from President Trump, particularly because he requires diplomatic, financial, and military backing from the United States, the most powerful supporter of Ukraine. That pressure continues to this day,” the report says.

Democrats also charge that Trump continues to solicit foreign interference — from China and Russia — to investigate the Bidens, adding to the urgency for Congress to respond: “This continued solicitation of foreign interference in a US election presents a clear and present danger that the President will continue to use the power of his office for his personal political gain.”

This story has been updated with additional developments Tuesday.