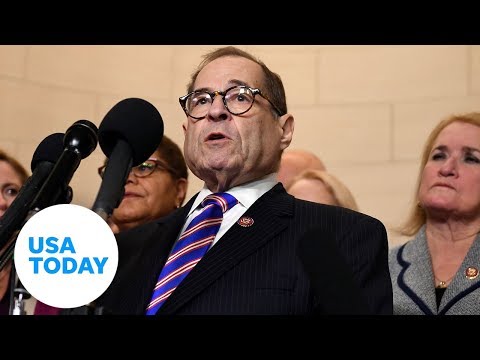 WASHINGTON – The House impeachment inquiry could become even more combative and theatrical Wednesday, as the Judiciary Committee holds its first hearing into whether to recommend the potential removal of President Donald Trump.

The Judiciary Committee has focused on whether Trump obstructed justice in special counsel Robert Mueller’s investigation of Russian interference with the 2016 election.

Follow along as USA TODAY provides updates on the day’s impeachment news.

Stanford University Professor Pamela Karlan joked that she had been so busy reading all of the transcripts from impeachment testimony over Thanksgiving that she ate a pre-cooked turkey.

“I spent all of Thanksgiving vacation sitting there, reading these transcripts…I ate like a turkey that came to us in the mail that was already cooked because I was spending my time doing this,” Karlan said, to laughter in the room.

Earlier in the hearing, Rep. Doug Collins, the top Republican on the Judiciary Committee, had suggested there hadn’t been enough time to go through all of the evidence produced so far in the impeachment inquiry.

Gerhardt: If Trump’s conduct not impeachable, ‘then nothing is impeachable’

Gerhardt noted how impeachment had been brought against people who failed to get away with their misconduct.

“The point of impeachment is…to catch that person, charge that person, and ultimately remove them from office,” he said. “Impeachment is always focused on people who got what they didn’t want to.”

During a NATO-related meeting with Italian Prime Minister Giuseppe Conte in London, President Donald Trump continued to attack Democrats and the House hearing back in Washington. He described the House Intelligence Committee’s impeachment report as “a joke.”

“To do it on a day like this where we’re in England and some of the most powerful countries in the world having very important NATO meetings. And it just happened to be scheduled on this day. It’s really honestly, it’s a disgrace,” he said.

Trump said impeachment is “a dirty word” that should “only be used in special occasions.”

He said he believes Democrats will have a “tremendous loss” in 2020, calling House Intelligence Chairman Adam Schiff, D-California, a “stone-cold loser.”

Jonathan Turley, a law professor at George Washington University, said he doesn’t support Trump and voted against him.

But Turley, who testified 20 years ago on the history of impeachment during the investigation of former President Bill Clinton, said the abbreviated inquiry for Trump was “problematic and puzzling” because of witnesses who weren’t yet subpoenaed and the record was incomplete. Turley warned that cutting corners on impeachment now could make future presidents more vulnerable to the effort in the future.

“What we leave in the wake of this scandal will shape our democracy for decades to come,” Turley said.

House Republicans attacked the Democratic witnesses on Twitter, arguing that they were biased against President Donald Trump.

“He’s been looking for any reason to impeach @realDonaldTrump for 3 years now,” Meadows wrote.

Rep. Andy Biggs, R-Ariz., a member of the Judiciary Committee, said Pamela Karlan had “visceral antagonism towards the President.”

The Republican witness, Jonathan Turley, presented himself as an impartial observer. “I am not a supporter of President Trump,” he said in his written testimony. “I voted against him in 2016 and I have previously voted for Presidents Clinton and Obama.”

Stanford professor ‘insulted’ by suggestion she doesn’t care about facts

Pamela Karlan, a law professor at Stanford Law School, said she represented the committee in voting rights cases before the Supreme Court under both Republican and Democratic majorities.

In response to Rep. Doug Collins, R-Ga., who complained that there were no fact witnesses at the hearing to move the inquiry forward, Karlan said she reviewed the transcripts of all the testimony at two weeks of public hearings before the House Intelligence Committee.

“I would not speak about these things without reviewing the facts,” Karlan said. “I’m insulted by the suggestion that as a law professor, I don’t care about the facts.”

Noah Feldman, a Harvard University law professor, led lawmakers through a recitation of the debate about including the impeachment provision within the Constitution for “high crimes and misdemeanors.” Feldman said Trump’s call with Zelensky alone is enough to impeach the president.

“President Trump’s conduct described in the testimony and evidence clearly constitutes an impeachable high crime and misdemeanor under the Constitution,” Feldman said. “According to the testimony and to the publicly released memorandum of the July 25, 2019, telephone call between the two presidents, President Trump abused his office by soliciting the president of Ukraine to investigate his political rivals in order to gain personal political advantage, including in the 2020 presidential election. This act on its own qualifies as an impeachable high crime and misdemeanor.”

Rep. Doug Collins of Georgia, the top Republican on the committee, said Democrats are only interested in impeaching Trump rather than gathering facts. Collins said the committee is effectively a rubber-stamp for other committees after three panels produced a 300-page report on Tuesday about Trump’s dealings with Ukraine.

“The clock and the calendar are what’s driving impeachment, not the facts,” Collins said.

Republicans have sought testimony from Intelligence Committee Chairman Adam Schiff, D-Calif. because the anonymous whistleblower who complained about a Trump call with Ukraine President Volodymyr Zelensky that became the foundation of the impeachment inquiry asked Schiff’s committee for guidance about where to file the complaint.

Schiff has denied knowing the whistleblower. Collins asked to have Schiff testify. But the committee tabled his request on a party-line vote of 24 to 17.

Committees investigating impeachment will be heard from ‘soon’

Nadler focused on Trump’s dealings with Ukraine, as described in a 300-page report released on Tuesday the House Foreign Affairs, Intelligence, and Oversight and Reform committees.

Nadler said the committee would soon meet to hear from the other committees that have investigated Trump since Democrats regained control of the House in January.

“In a few days, we will reconvene and hear from the committees that worked to uncover the facts before us,” Nadler said. “And when we apply the Constitution to those facts, if it is true that President Trump has committed an impeachable offense—or impeachable offenses—then we must move swiftly to do our duty and charge him accordingly.”

“Never before has a president engaged in a course of conduct that included all of the acts that most concerned the Framers” of the Constitution, Judiciary Chairman Jerry Nadler, D-N.Y. said. “The patriots who founded our country were not fearful men. They fought a war. They witnessed terrible violence. They overthrew a king. But as they met to frame our Constitution, those patriots still feared one threat above all: foreign interference in our elections.”

Nadler gaveled the impeachment hearing to order, Rep. James Sensenbrenner, R-Wis., asked for a hearing devoted to Republican witnesses, as allowed under a provision in House rules. Sensenbrenner also asked for the hearing to occur before the panel votes on potential articles of impeachment. But there was no immediate decision.

“We will confer and rule on this later,” Nadler said.

Who is testifying today?

The witnesses Wednesday are law professors who can help define what “high crimes and misdemeanors” in the Constitution justify removing a president: Noah Feldman of Harvard University, Pamela Karlan of Stanford University, Michael Gerhardt of the University of North Carolina and Jonathan Turley of George Washington University.

“Our first task is to explore the framework put in place to respond to serious allegations of impeachable misconduct like those against President Trump,” Judiciary Chairman Jerry Nadler, D-N.Y., said in announcing the hearing.

How to stay updated on USA TODAY’s impeachment coverage

On the eve of the hearing, Nadler privately told fellow Democrats that the circus that had consumed his committee in the past would not be on display Wednesday.

“I’m not going to take any s—,” Nadler told the group, according to a Democratic source, first reported by Politico.

The hearing comes a day after three other committees released a report about Trump’s dealings with Ukraine. The investigation found that Trump withheld official acts such as a White House meeting and nearly $400 million in military aid in order to compel Ukraine to deliver two investigations to help his reelection campaign in 2020.

“The evidence of the President’s misconduct is overwhelming, and so too is the evidence of his obstruction of Congress,” the 300-page report said.

Republicans on the Judiciary Committee led by Rep. Doug Collins of Georgia called the report a Schiff “sideshow” of misleading information. Republicans criticized the swiftness and lack of notification about Judiciary hearings, with no information about what else the panel plans.

“This ad hoc, poorly executed ‘impeachment inquiry’ will provide the Senate with ample justification for expeditiously disposing of it,” Collins told Nadler in a letter Monday.

Collins told reporters Tuesday that Nadler is wasting time with academics because he won’t call witnesses who know facts that lawmakers are reviewing. The hearing “is simply a filler because Jerry Nadler didn’t know what else to do,” Collins said.

“The Constitution does not say that impeachment will be the responsibility of a panel of liberal activities, but that’s where we’re going to be” Wednesday, Cheney said.

“Independents are breaking and breaking hard away from the Democrats’ narrative on this, and with every advantage, essentially, the opportunity to be judge, jury and prosecutor, all at the same time, for them to actually be losing ground really shows how weak this impeachment effort is,” said Ratcliffe, who called the meeting invigorating.

Five other committees have been investigating Trump since Democrats regained control of the House in January. The Foreign Affairs, Intelligence, and Oversight and Reform committees produced its report Tuesday on Trump’s dealings with Ukraine, which Democrats argued represented an abuse of power and obstruction of Congress. But Republicans drafted a minority report defending Trump.

Trump chose not to participate in the Judiciary Committee hearing, after White House counsel Pat Cipollone called the inquiry “baseless and highly partisan.” Trump has dismissed the inquiry as a partisan witch hunt and said impeachment or censure would be “unacceptable” because he did nothing wrong.

Nadler called Trump’s decision “unfortunate.” If the president had nothing to hide, Nadler said he should have provided thousands of pages of documents requested by Congress and allowed witnesses to testify rather than “blocking testimony with baseless privilege claims, and provide any exculpatory information that refutes the overwhelming evidence of his abuse of power.”

Mueller’s report described 10 episodes of potential obstruction of justice by Trump. But Mueller made no decision on whether to charge Trump because of Justice Department policy against charging a sitting president.

The Judiciary Committee sought testimony from Don McGahn, a former White House counsel, who is described in several episodes. But McGahn defied a May subpoena and the Justice Department appealed after a U.S. District Court judge ruled that he had to testify.

The episodes included Trump calling McGahn at home in June 2017 and telling him Mueller should be removed because he had conflicts of interest, according to the Mueller report.

McGahn decided he would rather resign than carry out that order. He feared a repeat of the “Saturday Night Massacre,” which happened when top Justice Department officials resigned rather than carry out former President Richard Nixon’s order to fire the Watergate prosecutor.

Trump met with McGahn in the Oval Office and pressured him again, according to the Mueller report. McGahn refused.

McGahn later told Trump’s then-chief of staff, Reince Priebus, that the president had asked him to “do crazy s—,” according to the report.

After news broke in early 2018 about Trump’s efforts to have Mueller fired, the president told White House staffers to tell McGahn to dispute the story and create a record stating he had not been ordered to remove Mueller, according to the report.