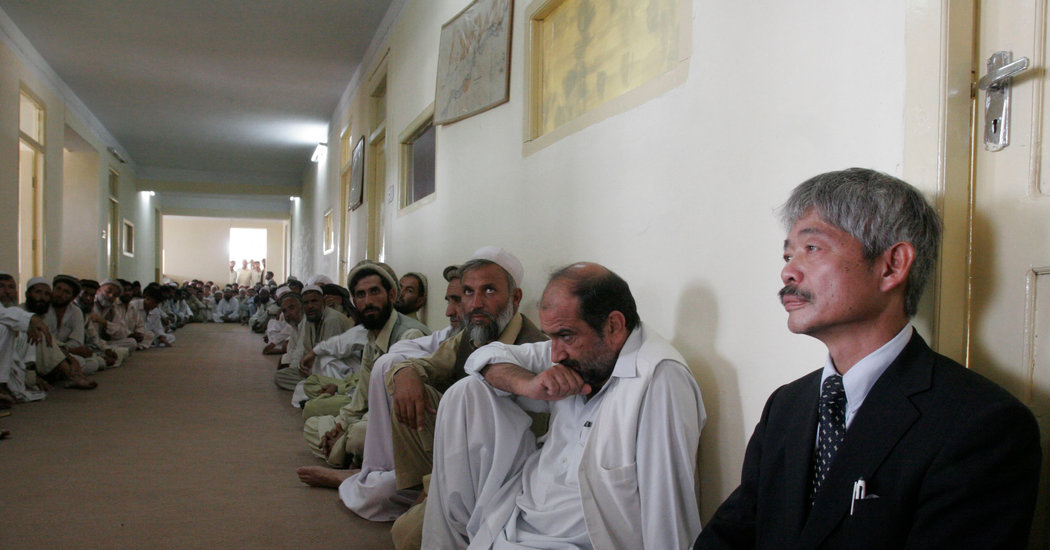 JALALABAD, Afghanistan — The people he helped called him “Uncle Murad.”

Dr. Tetsu Nakamura left his home in Japan in the 1980s to treat leprosy patients in Afghanistan and Pakistan. He later found, however, that severe drought was killing more people than his clinics could save.

So he discovered a new calling: irrigation. In the 2000s, adapting old Japanese techniques that required little technology, he helped villagers displaced by drought build a network of canals that has transformed an area of nearly a million residents.

“A doctor treats patients one by one, but this helps a whole village,” Dr. Nakamura had said. “I love seeing a village that’s been brought back to life.”

On Wednesday, Dr. Nakamura was attacked by gunmen while driving to work in Jalalabad, the capital of Nangarhar Province, in eastern Afghanistan. Five members of his organization’s staff were killed, and Dr. Nakamura was wounded fatally. He was 73.

“He was operated on in Nangarhar hospital, but he had received several bullet wounds,” said Attaullah Khogyani, a spokesman for the province’s governor. Dr. Nakamura died as they were rushing him to the local airport to fly him to the medical facility at the American military base in Bagram, Mr. Khogyani said.

It was the latest case in a series of attacks targeted at humanitarian workers in Afghanistan, just a week after an American working for the United Nations was killed in an explosion striking his vehicle in the capital, Kabul. Dr. Nakamura’s murder was particularly brutal, sending shocks of grief around Afghanistan and drawing widespread condemnation. No militant group has yet claimed responsibility: The Taliban denied involvement, said a Taliban spokesman, Zabihullah Mujahid.

The killing came on a day the State Department announced its peace envoy, Zalmay Khalilzad, was on the road again after President Trump declared the resumption of talks with the Taliban, which he had called off in September. After meeting Afghan leaders in Kabul, Mr. Khalilzad was set to travel to the Qatari capital, Doha, to resume negotiations with the Taliban.

“In Doha, Ambassador Khalilzad will rejoin talks with the Taliban to discuss steps that could lead to intra-Afghan negotiations and a peaceful settlement of the war, specifically a reduction in violence that leads to a ceasefire,” the State Department said in a statement.

The sorrow for Dr. Nakamura was deep in Khewa, a district in Nangarhar where much of the work of his organization, Peace Japan Medical Services, had been focused.

“He showed us life — he helped build our land. He was a leader to us,” said Hamidullah Hashemi, a resident of Khewa. “I feel like they have killed my closest family member. They left us without Nakamura.”

President Ashraf Ghani of Afghanistan, who in October awarded Dr. Nakamura honorary citizenship for his services, expressed “utmost grief and sorrow” and ordered his security agencies to find the perpetrators.

Prime Minister Shinzo Abe of Japan highlighted the transformative work Dr. Nakamura had done. “I was shocked that he had to die this way,” Mr. Abe told reporters.

Dr. Nakamura was among a handful of aid workers in Afghanistan who could trace a continual connection to the country from its descent into chaos in the 1980s through the decades of war and turmoil that have followed.

He was born in Japan’s Fuku Prefecture in 1946, and his first exposure to eastern Afghanistan was in his early 30s. According to a biography published by the Ramon Magsaysay Award, a prize for “greatness of spirit and transformative leadership in Asia” that he received in 2003, he was initially drawn to the mountainous borderland between Afghanistan and Pakistan by a fascination with insects. He quickly found himself besieged with requests for medical help.

After finishing medical school, Dr. Nakamura returned to the Pakistani border city of Peshawar, establishing clinics to treat the locals and Afghan refugees fleeing the Soviet war. He then opened clinics in the eastern Afghan province of Nangarhar, just as a severe drought was affecting the region. His patients were not only suffering from malnourishment but also diarrhea, as sources of clean water were scarce.

Dr. Nakamura, who also learned to speak the local language, Pashto, initially tried to improve the situation by digging hundreds of wells for clean water, but soon realized that wasn’t the answer.

“Starvation, drought — medicine can’t solve these problems,” Dr. Nakamura told the Japanese channel NHK in what was likely one of his last interviews. “We realized we needed to go beyond the narrow field of medicine and work to ensure that people had enough food and water.”

So he turned to building canals from existing water sources to irrigate arid regions. After facing difficulties in procuring equipment to dig the first canals, he drew inspiration from those built more than 200 years ago in his hometown in Japan.

Back then, Dr. Nakamura said, “You didn’t have dump-trucks and things like that. The villagers had to all work together to construct it by hand. So there was no reason why people living today couldn’t do the same thing. The thought inspired me. If we tried, we could do it.”

Over six years, with a work force drawn from drought-stricken villages, Dr. Nakamura helped build a main canal about 15 miles long. He continued the work even after militants abducted and killed one of his colleagues, Kazuya Ito. The smaller canals his team built spread across four districts. All in all, the Afghan authorities in Nangarhar said, by the time of his murder his canals had improved the livelihood of nearly a million people, and irrigated nearly 60,000 acres of previously arid land.

“He loved Afghanistan,” said Malek Zahoor, a local elder in Khewa district. “He had left his own home to be here, to help people here.”