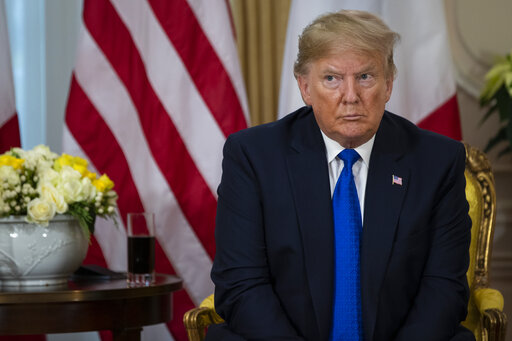 Congressional Republicans argue that President Donald Trump did nothing wrong related to Ukraine and his July call with Ukrainian President Volodymyr Zelensky.

They released a 123-page report on the impeachment inquiry to counter the majority report by the Democratic-led House Intelligence Committee, which the Judiciary Committee will likely use to craft articles of impeachment.

The Republican report argues that the impeachment inquiry led by Democrats is merely “their obsession with re-litigating the results of the 2016 presidential election.”

We found that the GOP report omits key facts and relevant testimony related to the inquiry. Here’s a look at six points in the report that needed a fact-check or additional context.

Claim: There’s no evidence that Trump directed anyone to pressure Ukraine

“The impeachment inquiry has uncovered no clear evidence that President Trump directed Ambassador Volker, Ambassador Sondland, and Secretary Perry to work with Mayor Giuliani for the purpose of pressuring Ukraine to investigate his political rival.”

This claim is directly contradicted by testimony from Gordon Sondland, the U.S. ambassador to the European Union.

Sondland testified that he, along with Energy Secretary Rick Perry and former special envoy to Ukraine Kurt Volker, worked with Trump’s personal lawyer Rudy Giuliani “on Ukraine matters at the express direction of the president.”

“Mr. Giuliani was expressing the desires of the president of the United States, and we knew these investigations were important to the president,” he added.

Trump has charged, without much evidence, that Ukraine meddled in the 2016 election to hurt his chances. An announcement of an investigation would have bolstered that argument.

Trump has also alleged, without evidence, that former Vice President Joe Biden, a potential challenger in 2020, forced Ukraine to fire a prosecutor in order to protect his son Hunter, who served on the board at Burisma, an energy company once under investigation.

Claim: The whistleblower report was misleading

This ignores that the whistleblower complaint has been backed up by the released summary of the phone call between Trump and Zelensky as well as the public testimony during the impeachment hearings.

The complaint said that when Trump spoke with Zelensky on July 25, he pressured Zelensky to initiate or continue an investigation into the activities of Biden and his son, Hunter. The readout of the call released by the White House shows Trump stating, “Biden went around bragging that he stopped the prosecution so if you can look into it.” Trump and his allies have spread the falsehood that Biden pressured Ukraine to fire the prosecutor for investigating Hunter Biden’s company, but that is not supported by evidence.

During the hearings or depositions, many witnesses expressed concerns about the call and said they viewed it as “improper” or “inappropriate.”

The whistleblower report also said that Trump requested for Zelensky to speak with Giuliani, which also appeared in the readout of the call.

The whistleblower’s report also said Trump asked Zelensky to uncover allegations that Russian interference in the 2016 election originated in Ukraine, and alluded to a theory that Ukraine controlled Hillary Clinton’s email server. Fiona Hill, a former White House national security aide, testified that the theory that Ukraine interfered in the election was a “fictional narrative that has been perpetrated and propagated by the Russian security services themselves.” (Here’s more about the debunked Crowdstrike conspiracy theory.)

Trump’s actions were rooted in his “long-standing, deep-seated skepticism of Ukraine due to its history of pervasive corruption.”

That argument is undercut by multiple pieces of evidence, including testimony by Sondland that Zelensky “had to announce the investigations. He didn’t actually have to do them, as I understood it.”

Trump’s own administration had cleared the way for Ukraine to get the aid. In a letter in May to the Senate Committee on Foreign Relations, Undersecretary of Defense John Rood wrote that he had “certified that the Government of Ukraine has taken substantial actions to make defense institutional reforms for the purposes of decreasing corruption…” The letter gave the go-ahead for security assistance aid.

The Defense Department announced in June that it planned to provide $250 million to Ukraine including for training and equipment.

The timeline of events also shows that Trump withheld nearly $400 million in aid shortly before his July 25 phone call. The whistleblower filed the complaint in August, and on Sept. 9, the inspector general of the intelligence community notified Rep. Adam Schiff, D-Calif., that there was a whistleblower complaint of “urgent concern.” Two days later, Trump released the aid. Nothing in that timeline suggests that Trump acted out of concerns about corruption, or that such concerns were suddenly resolved.

Claim: The assistance was ultimately released

This is literally accurate, but the timeline of events shows that the assistance flowed only after the freeze on aid became public and people criticized it.

The New York Times reported that White House lawyers briefed Trump about the complaint in late August, after it was filed on Aug. 12 but before the hold on aid was lifted on Sept. 11.

The lift occurred just two days after the intelligence community inspector general notified Schiff that the complaint detailed an “urgent concern” and three Democrat-led House committees launched an investigation into Giuliani’s dealings in Ukraine and the hold on aid.

It’s also worth noting that Ambassador William Taylor, the top U.S. diplomat in Ukraine, and Sondland both testified that Zelensky planned to use an interview on CNN to announce the investigations Trump wanted.

“The Ukrainians said to me or to Ambassador Volker or both of us that they had planned to do an interview anyway on CNN and they would use that occasion to mention these items,” Sondland said.

CNN host Fareed Zakaria said Zelensky was scheduled to appear on his show before news of the whistleblower complaint broke.

“In fact, witnesses called by the Democrats denied having any awareness of criminal activity or an impeachable offense.”

This is misleading. The witnesses who testified in the impeachment inquiry did so as fact witnesses, speaking about what they saw, did, or knew related to inquiry matters. They were not there to make legal conclusions.

Schiff during one of the public hearings said that witnesses are not aware of all the facts gathered in the investigation, and that they testified because they were subpoenaed, “not because they are for or against impeachment.”

Texas Republican U.S. Rep. John Ratcliffe during the hearing with Taylor and George Kent asked “where is the impeachable offense” in Trump’s call with the president of Ukraine. Taylor told him they were not there to decide on impeachment.

“That is not what either of us are here to do,” Taylor said. “This is your job.”

“Although Democrats and some in the media believe that Acting Chief of Staff Mick Mulvaney confirmed the existence of a quid pro quo during an October 2019 press briefing, a careful reading of his statements shows otherwise. Chief of Staff Mulvaney cited President Trump’s concerns about Ukrainian corruption and foreign aid in general as the ‘driving factors’ in the temporary pause on security assistance.”

Mulvaney did cite Trump concerns of corruption and of European countries not helping out enough as driving factors on why security aid was withheld from Ukraine. But Mulvaney didn’t stop there.

“Did he also mention to me in passing the corruption related to the DNC server? Absolutely. No question about that. But that’s it. And that’s why we held up the money,” Mulvaney said at an October news conference.

A reporter asked Mulvaney to be precise: “But to be clear, what you just described is a quid pro quo. It is: Funding will not flow unless the investigation into the Democratic server happens as well.”

“We do that all the time with foreign policy,” Mulvaney said.

He added that there was a distinction between asking Ukraine about the DNC server and asking about the Bidens, saying that “the money held up had absolutely nothing to do with Biden.”

Mulvaney retracted his remarks about the DNC server in a written statement after the press conference. Readers can draw their own conclusions by reading the transcript and context of Mulvaney’s words.

Hear a claim about impeachment that warrants a fact-check? Email [email protected].